There was a time, in living memory, when The Kingston Whig-Standard had foreign bureaus. It was a family newspaper with great ambitions and broad horizons. Now it is part of a chain with emaciated budgets and little capacity to cover Kingston, let alone the world abroad.

Last week’s arrest of two Kingston men – one a 16-year-old about whom we have been told nothing, the other a 20-year-old Syrian refugee who arrived in Kingston two years ago – proved the point. The Whig had no capacity to report on the case with its skeletal newsroom. Most of the useful information came from television networks in Ottawa and Toronto who sent reporters to the scene.

One of the consequences of the decline of print media is that, outside of major centres, there is no meaningful local news. The RCMP briefing had very little to share, and all The Whig could really do was reprint statements from various officials. A collection of annotated press releases is not reporting. But it’s the best that we have on offer.

It’s not evident what can be done. Even as we protest or lament, we are part of the same problem. The biggest boys in the business – or make that the grandest Grey Lady – are not immune. The New York Times ran an op-ed column recently entitled “Steve Jobs Never Wanted Us To Use Our iPhones Like This.”

“Mr. Jobs seemed to understand the iPhone as something that would help us with a small number of activities — listening to music, placing calls, generating directions,” writes Cal Newport, a computer scientist who writes on the impact of technology on culture. “He didn’t seek to radically change the rhythm of users’ daily lives. He simply wanted to take experiences we already found important and make them better. The minimalist vision for the iPhone he offered in 2007 is unrecognizable today — and that’s a shame.”

Inveighing against the “constant companion” model of smartphone use, Newport – author of Deep Work and the forthcoming Digital Minimalism – writes that “to succeed with this approach, a useful first step is to remove from your smartphone any apps that make money from your attention. This includes social media, addictive games and newsfeeds that clutter your screen with ‘breaking’ notifications.”

Newport argues, sensibly enough, that we need to go back to using our smartphones as tools, rather than becoming the tools of our phones. That’s what Jobs wanted, he argued – even if Apple today seems quite content with the constant companion model.

Super Bowl Sunday is the feast day of America’s late imperial decadence. And the whole world joins in.

Newport writes about that 2007 launch: 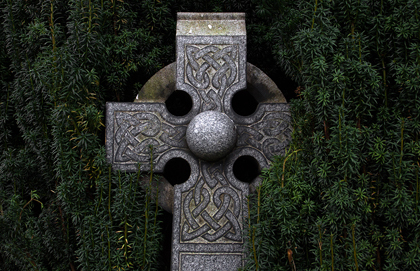 The Empty Tomb
Pause and Effect
Quarantine The Clickbait: From the Convivium Team

“The iPhone is a fantastic phone, but it was never meant to be the foundation for a new form of existence in which the digital increasingly encroaches on the analog,” concludes Newport.

All interesting and mostly useful advice. And then this, under the column, which I read (of course) online:

Yes, the message says one thing, the medium another. And which is more powerful? There was someone who said something about that once.

There are not a few voices – more anecdotal than backed by the comprehensive academic studies that take many years to produce – that think our screen time may be contributing to a deterioration in mental health. But might the same technology be part of the solution?

The scale of the problem is staggering. The Canadian Alliance on Mental Illness and Mental Health (CAMIMH) claims that by age 40, 50 per cent of Canadians will have or have had a mental illness. It’s one of those figures that seems inflated, but even if exaggerates the incidence by a factor of four, that still means that one in eight Canadians under 40 has been affected in some way.

CAMIMH put out its figures in advance of Bell’s “Let’s Talk Day,”which fell on Wednesday this week. The campaign encourages all Canadians to talk, text, and join social media to speak about mental illness. Bell contributes five cents to mental health programs for every mobile call and every long distance call made on its network, for every text message and every tweet using the relevant hashtags.

It all seems to the good, but at some point “let’s talk” has to mean talking in the old fashioned way, face to face.

Bell’s “Let’s Talk” day has become something of a feast day according to the nation’s secular liturgical calendar. Not quite as big as Valentine’s Day or Mother’s Day, but it would seem to rival Father’s Day. In any case, every culture has its feast days, even pagan ones, and we are approaching Super Bowl Sunday. About the NFL, in the 2015 film Concussion, the Dr. Cyril Wecht character speaks about the power of the National Football League: “The NFL owns a day of the week. The same day the Church used to own. Now it's theirs. The same day the Church used to own.”

And what does Super Bowl Sunday celebrate? Hard to say, but it does epitomize a culture whose top priority is recreation – commercialized to the hilt. Super Bowl Sunday is the feast day of America’s late imperial decadence. And the whole world joins in.

About this Super Bowl, the halftime entertainment will be provided by Maroon 5. I have never heard of them, do not know what they do, and wouldn’t recognize them if they appeared on the front page of The Kingston Whig-Standard. I knew the day was coming when my distance from the popular culture would mean that I wouldn’t even know the choir for the high holy days of American excess.

Why pay attention to the halftime show? I’ve felt compelled to do so ever since 2004. I wrote ahead of the game that Houston, host city that year, was a sign of what America was becoming, obese and with health care a dominant industry. I also wrote this at the time:

This weekend’s Super Bowl halftime show will be a salute to “MTV: Music Television”. The channel that pioneered the selling of pop music as exotic dancing will be right at home in a city where it seems every taxi carries advertising for prostitution. The halftime show’s star, Janet Jackson, is an appropriate representative of the pornografication of America’s celebrity-driven popular culture.

Editor in Chief Father Raymond J. de Souza reflects on the power of the empty tomb as we head into Easter weekend.

Today, Peter Stockland explores how the act of running is not some Olympic-level commitment to all-in exhaustion. Rather, this discipline creates space in our lives to move away from stress and towards a fuller sense of health and goodness.

Quarantine The Clickbait: From the Convivium Team

Convivium normally refrains from publishing straightforward press releases. We’re a journalistic site, and we bring journalistic principles and practices to our work. But today’s release from the Mental Health Commission of Canada is so powerful, so timely and so clear that we’re treating as an invaluable public service announcement for our readers.