Since the death of the great Canadian singer-songwriter Leonard Cohen at age 82, a surprising range of people around the world have made it clear they consider him one of their own.

They’re not only from the left, right and centre. They’re from across the religious spectrum: Jewish, atheist, Buddhist, spiritual-but-not-religious and Christian.

While other talented performers have revealed their spiritual quests in their work — including Bruce Cockburn, Bob Dylan, k.d. lang and Van Morrison — Cohen, arguably, touched the most spiritual nerves. Deep down.

It’s especially intriguing that, despite his irreverence and iconoclasm, he has also appealed to millions of active or nominal Christians, the group that make up by far the largest religious cohort in Canada, the U.S., Latin America and Europe.

Cohen was a “trans-religious” and “trans-cultural” seeker, according to retired Simon Fraser University world religions instructor Don Grayston. In that way Cohen was like many people.

Even with Cohen’s double-edged lyrics, a diverse range of people have been drawn to his theological consistency.

In this secular age, which can be so spiritually arid, Cohen’s bold, luminous Biblical imagery has special, novel appeal.

He was in constant conversation with a God that lured him forward.

Followers appreciate that he doesn’t avoid the dark places. And find him too harrowingly honest to be merely trendy.

Why, in particular, has this gravel-voiced Canadian been embraced by Catholics and Protestants, particularly those with a love-hate relationship with their faith?

Why, after his death, are prominent Catholic cardinals tweeting out lines from Hallelujah? “I'll stand before the Lord of Song / With nothing on my tongue but Hallelujah.”

Why have liberal Protestant clergy been unveiling his fedora-clad photo in their sanctuaries and having their congregations sing from his “holy-dove” lyrics in Anthem?

“There is a crack in everything / That's how the light gets in.”

That phrase from Anthem, Cohen has said, comes closest to his personal credo.

Cohen invited us all to embrace the cracks of human “brokenness,” which is a universal theme that appeals across the spectrum.

But Christianity makes a specific point of revering a man it says was “broken” on the cross. Every day, clergy mark how Jesus’s body, in the form of communion bread, is “broken” for adherents.

Even though Cohen was highly active as a youth in his synagogue in Montreal, he was also drawn to Quebec’s Catholicism. He wanted his art to appeal to struggling Catholics. He dedicated a book to Canada’s aboriginal Catholic saint, Kateri Tekakwitha.

In addition to making frequent Hebrew Bible references to King David and Egyptian pharaohs, Cohen’s lyrics lean heavily on expressions like “Hallelujah,” “Amen,” “born-again” and “grace,” which resonate for Jews, and are foundational for Christians.

Suzanne, Sisters of Mercy, Democracy, Here It Is, If It Be Your Will, Born in Chains, and his last songs, You Want It Darker and It Seemed the Better Way, rely on Christian imagery. And many of his tunes adopt the sounds of gospel, medieval chant and church hymns.

This is not to argue that Cohen was a crypto-Christian. He was no Christian choirboy. He was a mischievous spiritual pragmatist, drawn to whatever enlivened him. 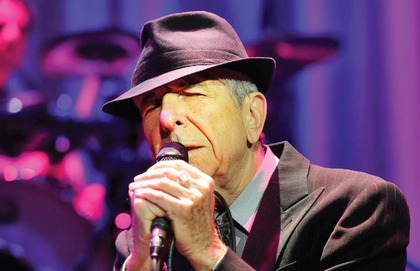 “Anything, Roman Catholicism, Buddhism, LSD, I’m for anything that works,” he once said. At one point he dabbled even in Scientology.

That last thing Cohen seemed to want was to turn his back on Judaism. Even though he constantly tested the tradition against his own conscience, his commitment grew deeper in his final years. Yet he had no need to set aside Jesus Christ.

Even though Cohen strove valiantly in the 1990s to become a Zen monk at Mount Baldy Monastery in California, he concluded Zen was a spiritual discipline, not a faith.

He didn’t end up opting for Buddhist “detachment.” Nor did he embrace Zen’s non-theism, or atheism.

Grayston, who is also an Anglican priest, is working on a book that details the similarities between Cohen and the earthy Catholic monk, Thomas Merton, who emphasized Buddhist meditation. Grayston considers both men “tricksters.”

Cohen emphasized as he grew older that he was grounded in Judaism and what he liked to call “the landscape of the Bible.” He felt attached to the Biblical God, passionately, intimately.

“I think there really is a power to tune in on. Some people find it difficult. You mention the word ‘God’ to them and they go through a lot of difficult reactions,” Cohen once said.

“But it’s easier for me to say ‘God’ than, ‘Some un-nameable mysterious power that motivates all living things.’”

Cohen often referred to God, and the Bible, as a source of powerful possibilities, which he calls invitations.

He was in constant conversation with a God that lured him forward.

He had lots to say about Jesus.

"We have to rediscover the Crucifixion. The Crucifixion will again be understood as a universal symbol not just as an experiment in sadism or masochism or arrogance. It will have to be discovered cause that's where man is at. On the Cross,” he has said.

“Jesus may be the most beautiful guy who walked the face of this earth. Any guy who says, ‘Blessed are the poor. Blessed are the meek’ has got to be a figure of unparalleled generosity and insight and madness,” he said.

That last thing Cohen seemed to want was to turn his back on Judaism. Even though he constantly tested the tradition against his own conscience, his commitment grew deeper in his final years. Yet he had no need to set aside Jesus Christ.

“I'm not trying to alter the Jewish view of Jesus Christ. But to me, in spite of what I know about the history of legal Christianity, the figure of the man has touched me."

In songs like Please Don't Pass Me By Cohen identified with the extravagant mission of Jesus, whom he valued for “declaring himself to stand among the thieves, the prostitutes and the homeless.”

The Christian imagery in his more recent songs enlightens us.

“There is a crack in everything / That's how the light gets in.”

In Here It Is, he laments the inevitability of suffering in the face of love’s elusiveness. “Here is your cross / Your nails and your hill / And here is your love / That lists where it will.”

In a song about spiritual surrender, Cohen seems also to be alluding in If It Be Your Will to Golgotha, the hill on which Jesus was crucified: “If it be your will / To let me sing / From this broken hill / All your praises they shall ring.”

He directly cites Jesus’ torture in the title track to his final album, You Want it Darker, singing ‘’Magnified, sanctified, Be thy holy name / Vilified, crucified in the human frame.”

On the same album, in It Seemed the Better Way, a tragic song of lost optimism, he associates Jesus with truths he dare not utter.

“I better hold my tongue / I better take my place / Lift this glass of blood / Try to say the grace / Seemed the better way / When first I heard him speak.”

Cohen, who has spoken of his poems and songs as “muffled prayers,” also mined the meaning of love to make the spiritual quest again seem meaningful to millions.

His beloved friend, singer Jennifer Warnes, said of him: “If he has one great love, it’s his love for God.”

To Cohen, love can bring everything together — sex, relationships, spirituality, metaphysics — and divided humanity itself.

He once said: “Love is the only engine of survival.”

As he did in Alexandra Leaving, Cohen also suggests in You Have Loved Enough that maybe the holy he sometimes has trouble believing in is a transcendent cosmic Lover.

“You kept me from believing / Until you let me know / I am not the one who loves / It’s love that seizes me.”

Douglas Todd writes about religion, diversity and migration for Postmedia News and other publications, including Religion News Service, based in New York. He’s received more than 40 journalism awards, including The Templeton Religion Reporter of the Year Award, a National Newspaper Award and many Jack Webster Foundation awards. He is chair of the International Association of Religion Journalists (IARJ).

The Tower of Song

But through the pleasure of his poetry Cohen could – and continues to be able to through technological posterity – move us to time and place where: Poetry does not lose its magical power… but merely transfers it from an action on nature to an action on the reader or hearer,” Frye says ...

The End of the Summer of Love

Father Tim McCauley considers the 50 years since the great hippie upheaval of 1967 and finds a paradox: that generation’s lust for power has given way to a new counterculture of Christian love.