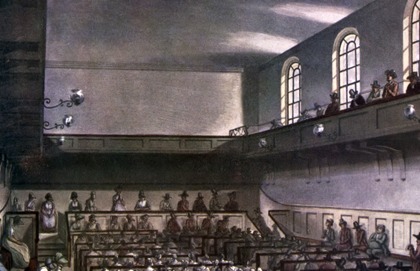 "All the world is strange," said the Quaker to his wife, "except for me and thee. But even thee I wonder about."

These days I am feeling a lot like the Quaker's wife.

Western democracy is the offspring of a marriage of ideas between Christian social thought and the enlightenment. In different contexts, the particular features of democracy remind us more of one intellectual parent than the other, but only a conscious attempt at ahistorical forgetfulness would deny democracy's DNA.

Over the past few months, this blog has covered several stories which are issues of interest individually, but also tell a story collectively. The TWU law school debate. Nanaimo city council's resolution. The Liberal Party’s dictate that pro-life convictions make one unsuitable for elected service. The Hobby Lobby case. Each of these incidents involves the frustrating of full social participation by those who have a strong religious identity. Collectively, they suggest an attempt to reframe how freedom of religion and expression is understood in our democracy.

Personal, not private
Veiled Interference in Freedom of Religion
Understanding the Fringe

A blog is too short to fully explicate the point, but let me make three observations.

First, the public execution of eight Christians in Iraq this weekend is a poignant reminder to keep this conversation in perspective. When our disputes regarding religious freedom are considered in an international perspective, Canada and the United States remain privileged places. For those inclined to self-pity and all too ready to play victim, it is important to maintain a global perspective.

But a third observation also needs to be made. I've spent thirty years in public life, in most settings being "out" as a Christian seeking to serve the common good. I've self-consciously eschewed a "culture war" approach. Cardus' explicit strategy has been to build coalitions with those who may not share our philosophy, but with whom a common good argument places us on the same side of a particular issue. That puts us off-side with some fellow religionists who argue that anything less than direct polemic against that with which you disagree amounts to compromise, regardless of the culture war that may be enflamed.

The term "culture war" usually invokes images of religionists whose strident attitudes many find off-putting and whose clear principles leave no place for accommodation of difference. But today, the aggressors in the culture war are not religionists but rather secularists. Many (not all, thankfully) seem to be intent on seeking out any expression of public religion and squashing it. One would think that secular liberal principles would aspire to accommodation between those of different worldviews, but today's secularists seem loaded for bear (with registered guns, of course), viewing religionists as strange, wild creatures who need to have their religion caged into a very private sphere, only having to be dealt with on visits to the religious studies zoo. Take the cases noted above. Every one of them involves secularists taking action against religiously-motivated activities of their neighbours when it is quite evident that there are avenues of accommodation available in which the alleged offence against the public could easily be resolved. But accommodation and resolution isn't the agenda. Today's secularism has the objective of redefining the freedom of religion as it has been historically understood. And if the religious identity of some fellow neighbours needs to be trampled, that is a price they are ready to pay.

Which brings us full circle to the quote I opened with. It's taken from Uncle Ben's Quotebook, a coffee table gem that graced the home of my youth. As an opinionated ten-year-old pipsqueak, I eagerly cited quotes like this into the adult conversations on which I eavesdropped, feeling quite good about myself when they hit the mark. But sometimes they misfired. It took an older sibling to point out to me the irony of the Quaker marginalizing his wife, only to expose himself to be "stranger" than she, and ultimately hypocritical.

There are days when I wonder whether modern secularists, with their proselytizing, non-accommodating aspiration for the public square, deserve to be indicted along with our non-self-aware Quaker husband. As a religionist, I'll remain committed to civil and respectful dialogue, holding to the hope that more of those secularists will join the conversation.

*Several readers have pointed out that this quote, which we originally attributed to Dietrich Bonhoeffer, more properly should be attributed to his contemporary Lutheran pastor, Martin Niemoller. Although various web sources can be found in support of either attribution, the work of historian Harold Marcuse would suggest that the Niemoller attribution would have been more accurate. We apologize for this error and thank those brought it to our attention.