Some four and a half years ago in October 2014, while serving as Canada’s Ambassador for Religious Freedom, I travelled to Ukraine where I had the occasion to meet with a most remarkable man.

Myroslav Marynovych is Vice-Rector of the Ukrainian Catholic University in Lviv, the only Catholic institution of higher learning in the former Soviet Union. A devout Ukrainian Greek-Catholic, a noted human rights defender, and a survivor of seven years of hard labour in the Gulag for anti-Soviet activities in the 1970s, he ranks in the 20th century pantheon of confessors of human dignity with the likes of Václav Havel and Lech Wałęsa.

While sitting in Myroslav’s office discussing the recent violations of religious freedom in Russian-occupied Crimea, and what was only then emerging as not-so-covert Russian actions to destabilize Ukraine by invading the eastern Donbas region of the country, I posed a question. “What,” I asked, “is the best response to Russian propaganda that successfully sows doubts in the minds of western leaders as to Russia’s actions in Ukraine and the nature of the 2013-14 Revolution of Dignity on the Maidan in Kyiv?”

Myroslav offered the following wise reflection. He began by saying how much he admired Western pluralism, traditional Western pluralism in any case. For him it was a system in which many different and competing voices sought to explore and encounter the truth and in so doing guide society towards truth. This had been a very different approach to what existed under Soviet Communism.

He went on to lament that this was no longer the case. He argued that while you now continued to have in Western democracies many diverse and competing voices, they no longer sought to understand and pursue the truth. They relativized it and asserted individual and subjective "truths."

He then got to the heart of the matter at hand. “Vladimir Putin knows that this is now how Western elites think and so he fashions a series of lies and offers them for consideration. Western governments and media receive the lies as the Russian perspective, another valid point of view, just one of many truths that need to be considered. While taking time to critically assess the Russian position the damage is done, and it is only later that the lie may be exposed.” 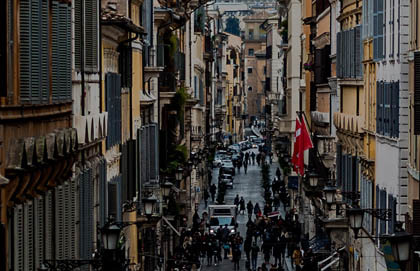 This vignette came to mind last week during the continually unveiling saga around SNC-Lavalin and involving this country’s most senior political leaders and public servants. To be sure it is a very different case from Russian-occupied Ukraine, but the fundamental issue is the same: what is truth? For two weeks the Prime Minister, the Clerk of the Privy Council, and other senior officials have maintained publicly, often with the most obscurantist language, that nothing untoward took place, that no attempts to improperly influence the decisions of former Attorney-General Jody Wilson-Raybould were made.

These glimpses are hopeful signs in that they reveal that each of us as human beings in our deepest consciences, beneath the layers of deception and little lies we often construct is an innate knowledge of right and wrong.

What is significant in all of this is the decided absence of universal and objective truth: the truth.

In the Cloudcuckooland world of competing "truths" the most compelling subjective truth, which is an oxymoron and nonsensical to begin with, is often determined by who has the most effective argument, who is seen to wield the most influence with the public, who does the media like more, or who can evince the greatest depth of feeling and trigger our emotions so that we may come to embrace their ‘truth.’ As the competing claims to have the full truth pile on each other we get absorbed into a maelstrom of obfuscation, manipulation, and seemingly unquenchable doubt about what is true and what is false, what is right and what is wrong. This is no way to live. This is no way to engage in public debate. And, this is no way to run a country or build a common life together as human persons.

The amorality of the whole sordid affair should give us significant pause. It should stir up within us what each of us knows: that there is truth, unapologetic, unvarnished, objective, universal, glorious truth. We can detect glimpses of the truth in the fogginess of this current episode. It comes through when the media, parliamentarians, and even we as citizens utter phrases such as “we have to get to the bottom of this,” or “we need to have the full story.”

These glimpses are hopeful signs in that they reveal that each of us as human beings in our deepest consciences, beneath the layers of deception and little lies we often construct is an innate knowledge of right and wrong. The American Thomistic philosopher and forthright natural law theorist J. Budziszewski offers this assessment in his worthwhile book What We Can’t Not Know:

The common moral truths are no less plain to us today than they ever were. Our problem is not that there isn’t a common moral ground, but that we would rather stand somewhere else. We are not in Dante’s inferno, where even the sinners acknowledge the law which they have violated. We are in some other hell. The denizens of our hell say that they don’t know the law -or that there is no law- or that each makes the law for himself. And they all know better.

To Differ Without Deferring

A Task Worth Undertaking

Matthew Lau offers a perspective on Preston Manning’s new book, Do Something, which exhorts Canadians to rescue ethical democracy.

The Truth No State Can Abolish

In an address to the Canadian Conference of Catholic Bishops this week, Fr. Deacon Andrew Bennett says that true religious freedom for Christians is the unyielding proclamation of Christ.