Last week I ventured out of the shackles of my internship and went on a field trip into the fabled land of Research in Motion (RIM), OpenText, and Wilfrid Laurier University. Congress 2012 of the Humanities and Social Sciences was put on to bring together academics from across the country to discuss new ideas and complex problems facing the world today. One such idea captured my interest, in a session hosted by the Social Sciences and Humanities Research Council (SSHRC).

The discussion was centered on the digital economy, and specifically the gaming industry. Topics included women in video games, why video games are successful, and how video games can be used in conjunction with the health industry. The talk piqued my interest, as I often enjoy the pleasure of playing video games. While I wouldn't say I consider myself a dedicated gamer, I enjoy playing a few hours a week for catharsis, a nice way to de-stress.

As SSHRC begins to focus on gaming and culture, I wonder if we as Christians need to a take an unbiased look ourselves. There is always great temptation for easy answers and snap judgements—video game violence leads to violent people!—but can we find a more nuanced approach? Can we find principles for the healthy playing of video games, the healthy making of them, the healthy selling of them? 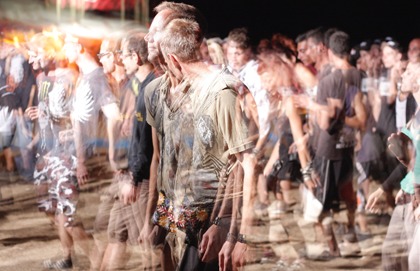 Walking Away From Omelas
The Journey
Don't Kill the Messenger

All too often video games are either summarily rejected or unconditionally accepted. I believe finding the proper place of games in our social architecture is both possible and important, and that Christians should carefully examine both sides of the argument and explore what place video games can hold in our lives—including our spiritual lives.

Video games can be a great way to start discussion on specific, difficult problems facing our "real life" world. This is a theme within the video game series Mass Effect, a science fiction series following one Commander Shepard's fight against an invading machine race attempting to wipe out sentient life in the universe (an epic race against time, if you will). In the series one of the key themes explored is the discussion of free will and what it means to be alive. While the series uses the hyperbole of a sentient machine invasion to start the discussion, it cuts deeply into the topic in a way few mediums of entertainment can.

Mass Effect explores inclusivity and discrimination, and so speaks to the struggle of humanity to find itself in an alien universe—something we as Christians can identify with, as my fellow intern John Sikkema wrote on recently. Yes, it can be a stretch to draw social lessons out of such an entertainment medium . . . but just as often it can be very useful. Video games may not be the waste of time some make them out to be.

Do video games have a place within a Christian life? It's an under-developed field of inquiry. Just like SSHRC is focusing research on the gaming industry, maybe it's time for the church to explore the idea further and make a concerted, objective effort at examining the intersection of video games with spirituality.

By running a Tough Mudder challenge, you'll unlock a true sense of accomplishment, have a great time, and discover a camaraderie with your fellow participants that's experienced all too rarely these days ...