In 1985, the same year the Titanic was discovered, Steve Jobs quit Apple, and Nintendo unveiled their first game console, Margaret Atwood released what would not just become her most successful novel, but one of the more haunting dystopias of the 20th twentieth century: The Handmaid’s Tale.

Atwood’s book follows Offred, a woman whose name literally means “of Fred.”  If it sounds possessive, that’s because the story takes place in the Republic of Gilead, a fledgling, post-American nation where women are stripped of the right to hold property, use bank accounts or even read without permission. Making matters worse, an epidemic of sterility leaves most of the population unable to bear children, turning any fertile woman into a valuable commodity.

The key word here is ‘commodity’ : if a family counts itself among Gilead’s wealthiest and most influential, they can request the services of a surrogate. These women, called ‘handmaids,’ are given new names (Offred, Ofglen, Ofwarren) and are compelled by law to sleep with the head of the household and bear children for his family.

While parts of the narrative ring of actual historical events, like Iran’s infamous 1979 Revolution, most readers shelved Gilead alongside our other improbable futures. 1985, it must be said, was a very different year from our own.

Fast track to 2017: a large number of outlets are tripping over themselves to offer analysis of what the Tale means in an era of Trump. Every age reinterprets the classics for its own time, and many today are declaring Atwood’s visceral depiction of government-mandated misogyny and bigotry to be a chilling reflection of modern trends (a quick Google search will bring up articles in Rolling Stone, The New Yorker and even the author’s own piece in The New York Times). Most of the attention, though, focuses on how the Republic of Gilead proves to be a monstrous incarnation of Christian fanaticism, making it easy for readers to equate violent fundamentalism with conservatism and turn The Handmaid’s Tale into another volley in an already convoluted culture war.

This kind of discourse doesn’t just present a one-sided narrative of interpreting the Tale, it also papers over the nuances Atwood carefully layers into her society. Yes, representatives of the regime use the Beatitudes to cow women into rape, but the authorities consider Catholic priests just as subversive as gay men (a population referred to by the government as ‘gender traitors’). Yes, the show taps into unhelpful, potentially offensive elements of the zeitgeist (all the sympathetic protagonists are urban academics and creatives), but it is a lesbian handmaid who, on seeing the demolition of a cathedral, blurts “they...erased it,” furiously, connecting the act with how their identities are likewise erased. 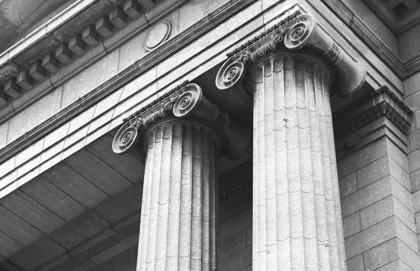 God's Love and the Law
Robertston Davies: Firmly In The In-Between
Fellowship of the Rings

The reduction of women to “walking wombs” echoes pro-choice discourse but, every time a baby is born, there’s no mistaking the value of life. In the novel, Atwood portrays the Baptists and Quakers as members of the resistance. Whoever tries to make The Handmaid’s Tale out to be anti-Christian might not be doing all their homework.

Whoever tries to make The Handmaid’s Tale out to be anti-Christian might not be doing all their homework.

That said, how can people identifying as conservative believers react to the show’s reception? One way is settle for pointing out its flaws, as S.D. Kelly has done in Christianity Today, but approaches like this might result in merely escalating culture war. One side throws a salvo, and the other throws one right back – the real casualty being, in many cases, nuance. Genuinely complicated issues end up being propped as caricatures, and we see this dynamic, once again, playing out over The Handmaid’s Tale.

But what can be done about it?

Sometimes people speak about culture war as an inevitable reality, with a logic that can seem lifted from the nuclear arms race. If one side memes, we meme funnier. Which, logically, just enables more escalation.  What if, though, there are ways of defusing the dynamics of culture war, ways of avoiding these unhelpful, online shouting matches? How can conservative believers, of any faith, react to The Handmaid’s Tale in a way that brings us closer to the root causes of conflict in our society?

The methods are uncomfortable but universal and they begin as many do, by asking the right questions. If there’s an anxiety over a show, movie or song, an anxiety we may feel is being expressed problematically, it might be helpful to first ask why something was made the way it was.

Criticizing the way Gilead’s repressive policies seem like a low-blow to conservative ideology (which, in some ways, it is) might not be as constructive as asking why aspects of conservative thought might be seen as threatening. If there are issues, which there obviously are (on all sides of the political spectrum), then we have the opportunity to work on them in a non-partisan way, putting genuine progress ahead of earning points.

It just takes a little listening at first, along with the wisdom to realize, in many ways, we may all be telling different parts of the same tale.

Josh Nadeau is a Canadian writer based in East Europe. He is associate publisher of Dappled Things Magazine.

God's Love and the Law

Fellowship of the Rings

After last month’s mass murder of Jews at worship in the U.S., Toronto Muslims formed Rings of Peace around local synagogues to manifest compassion and solidarity. Today, Farhad Khadim reflects on the power of the gentle gesture as way to stand against bigotry, and touch hearts afflicted by hatred's pain.