If you are, like me, a teacher from Alberta, or if you are, like me, marginally attentive to public discourse, you’ve been inundated with doom and gloom over the danger to education posed by the provincial government. Cuts galore, as predicted, and jobs (or, at least, the jobs of those without permanent contracts) on the chopping block, where the blade very nearly landed in Calgary Public.

This has occasioned weeping and gnashing of teeth from many teachers and teaching unions. Predictably, they remind everyone of how essential the education of our children is for the future and how necessary education is for students to learn the skills they need in our modern world (remember this) and, therefore, how reckless the government is being by restricting the flow of money into it.

The somewhat-too-cold response, though, comes readily: Alberta is in debt, to the point that its credit rating has lurched downwards multiple times in the last few years, and it needs paying off as soon as possible. Of course, the calm voice of austerity continues, education is important, but, looking strictly at the numbers, one might conclude that a bit of fat can afford to be trimmed from the budget so that the next generation isn’t saddled with our debt. These merciless cuts, too, are “for our future.”

There is something unappealing and perhaps even chilling about this attitude. But, through the clear (if icy) gaze of accountancy, there is something to it. Teachers often complain about how poorly they are paid given how valuable their work is in apparent ignorance of the old diamond-water paradox of economics: What is most objectively valuable is not what necessarily commands the highest price if it is in more ready supply (and a B.Ed. is, frankly, not too difficult to acquire). And, sometimes, a nasty attitude towards teachers emerges in conversation, in which teaching is not so much as a noble vocation, but as an easy way to make money if you don’t have any other prospects. No wonder certain people find it so easy to cut their funding.

One fears the thought of being accused of victim blaming, but there is a sense in which teachers—or, at least, the teaching profession—has brought this upon itself. It has accepted the premises of the modern world, and now the modern world has turned on it. And the late George Parkin Grant saw it coming.

Although best known as a political philosopher, Grant was fundamentally more interested in religion (to the point where his neighbourhood nicknamed him “the bishop”) and in education (to the point of being involved with experimental educational arrangements like Rochdale College). In 1955, he gave a talk to teachers in Nova Scotia titled “The Teaching Profession in an Expanding Economy.” Like so much of what Grant said and wrote, it has proved prophetic, both in the sense of proclaiming harsh truths and in the sense of being uncannily prescient.

The teaching profession, Grant warned, was in danger of marginalization, the same way that philosophers, clergy, and artists were marginalized in modern society. The reason for that was technological society diminishing the life of the spirit.

It was a paradox, Grant noted, that technology was giving us more leisure time to devote to spiritual things (because of the washing machine, Grant observed, his wife had more time to read a book), yet that same technological civilization engendered a materialism and indifference to the life of the spirit that was fatal to humanity. Humanity is not automatic, Grant insisted: we need (as Tillich put it) “the courage to be,” to pursue “spiritually infinite ends.” Without them, we are “barbarians,” or even “apes.” Yet, in a technological society, “men are so intoxicated by the achievement of finite ends” that the spiritual holds no appeal for them.

Education, of course, is caught in the crosshairs, since the goal of education, at least since Plato, is to draw the student “out of the shadows and imaginings into the truth” (a quote that would end up on Grant’s tombstone). Its purpose is ultimately to take the soul, in Bonaventure’s expression, on a journey to God (which Grant paraphrased as meaning “into reality”--something bigger, thicker, and more meaningful than an accumulation of worldly knowledge). Students didn’t learn math just so that they could use equations for engineering purposes but because, as Galileo observed (in the tradition of the mysticism of Pythagoras), mathematics is the language with which God wrote the universe. Human beings are rational animals; mathematics is rationality; therefore, we learned math to become more rational and thus more human.

Yet today, Grant lamented, so-called “education” is about churning out engineers and technicians, people with “skills” that will enable them to be financially successful; in other words, to fit snugly into the machinery of modern society.

“Where the end of the old education was to free men so that they were out of the cave; the purpose today is to equip them to be successes in the cave. That is, education is no longer that for which society exists; it has become the servant of society.” 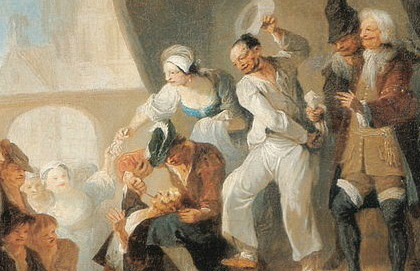 Modern education has largely adapted this pedagogical approach (Grant traced it to educational reformer John Dewey), which is why it has largely set aside, say, the teaching of Latin in favour of hands-on MakerSpace activities or “Hour of Code” (and there is a political undercurrent to doing so: Seymour Papert, the founder of MakerSpace, was an active socialist). In the computer age, these skills are so essential that we supposedly cannot afford to reduce funding to schools, where children learn to program apps and give instructions to robots.

Teachers are often subjected to watching videos of the amazing things that students in other classrooms have been able to build or design; it is supposed to be inspirational, though more often than not it is simply discouraging (“well, I’ll never be able to teach my kids to do that...”).

But think of what has happened to theology. When the clergy began teaching a version of Christianity which was more about doing good in the world than about sacramental communion with God, church attendance began to steadily drop. If that’s what religion is about, you don’t need church or clergy for it. By their own premises, liberal churches had made themselves unnecessary. And, in 1955, Grant was already warning that the same was true for the teaching profession. Technology tends to race past what teachers are capable of sharing with students, and malfunctioning technology can waste an entire 40-minute teaching block. Further, you can learn to code online, so just how important are teachers and brick-and-mortar in this brave new world, anyway?

Grant identified this inconsistency in a certain professor at the Ontario College of Education:

“On the one hand, he continually cheapens education by his advocacy of the anti-intellectual position - his jokes about the uselessness of Latin, etc., but at the same time, he expects that teachers should be highly respected in society. But, of course, Dr Phillips cannot have his cake and eat it too. He cannot define education in a cheap pragmatic way and then expect that teachers will be considered important.”

This is not to say Grant did not fight for teachers’ rights.

“We have an organization at Dalhousie which is de facto a union and I am a very keen and active member of it,” he proudly announced, and stressed that teachers needed economic security.

However, he hastened to add that the reason teachers needed to be well paid was because they needed time for leisure. Leisure, as Josef Pieper tried to teach us, is not the same thing as a vacation, which is all-too-easily just an occasion for the mortal sins of sloth and luxuria. Leisure instead is a time for spiritual deepening. It is supposed to be when teachers to go on a kind of retreat so that they can return to the souls they are leading out of darkness with more insight.

In my experience, this is not usually, what teachers do with their paid breaks. As a result, it is harder to justify paying so much for them out of the public’s pockets.

This is why there was something suicidal about the adoption of Deweyan pragmatism into our schools. Once teachers and teachers’ colleges accepted that education is not about helping a person transcend the material into the spiritual, eternal questions (albeit through the contemplation of the material) but instead about learning how to fit into the modern technological economy, they essentially submitted themselves to being judged by the standards of technical reason. And that leads us here, where school budgets are just another part of a ledger to be balanced. And because teaching no longer has the noble role that Plato assigned to it, teachers themselves are seen as less important to society.

Grant admitted that the temptation to accept the bleak view of the moderns was strong, even for him. “I find myself, when I am tired or depressed, taking their view of the matter, really unconsciously believing that the teaching profession is a haven for those who are not tough enough to pursue power or make money. I find this lie creeping like a nasty cancer into my soul.”

As someone who had given up a promising education in law to become a professor of philosophy, he was probably especially vulnerable to this insidious thought.  But he knew the way to remedy this sickness in both society and in his own soul: “Only if endless teachers everywhere cast out these false views of education and hold consciously in their minds its true purpose will our profession be what it ought to be.”

Teachers need to hold forth that our job is important because the soul’s access to reality is important, and teachers help bring truth forth from students; they are, as Socrates said, intellectual midwives. This might not be as glamorous as saying that teachers matter because they prepare students for a competitive global economy, but it has the benefit of being true, and our only hope.

If teacher unions fight against education cuts yet continue to accept that the point of education is equip students with the technical (and emotional) skills to be effective cogs in the modern social machine, they are fighting a losing battle. Any minor victories they score will only stave off the inevitable collapse of the profession’s respectability. With that respectability will go the humanizing effect of education; we will be more technologically powerful, and less humanistically cultivated, than ever. And, to end with a practical observation, if the movement to close down the Catholic school system because it has “outlived its usefulness” is successful, then not only is the fate of Canadian education sealed, but we will find ourselves accelerating towards it.

The Conversation Precedes Us

Education exists to help make the best sense of the long, complex, and tangled skeins that are the conversations you are now listening in on, waiting for your chance to jump in ...

Solutions to the education dispute in British Columbia

Maybe something like 7 percent over 5 years or 8 percent over 6 years would get it done? For the future, why not establish an independent salary arbitration body for teachers the way BC Premier Gordon Campbell did a few years ago for MLA salaries? An independent body can weigh all the factors involv...