A Calgary-area priest has a unique way to evangelize to the masses – a custom-built motorcycle by the world-famous Orange County Choppers with a Pope John Paul II theme.

“The story of the bike is quite an interesting story,” says Father Mariusz Sztuk, pastor of St. Francis de Sales Church in High River. “Sean (Lynn of the God Squad) and I ride with Jeff Cavins (a Catholic speaker and author) every year and I remember Jeff was talking to me one year and he said, ‘You need to look at this bike.’ I told him I don’t need to look at the bike because I had my own bike.

“When he showed me the picture, then I said, ‘I need that bike.’ So I got this bike through Jeff Cavins and that bike was built as a tribute to Pope John Paul II. There’s a lot of stuff that is very Catholic on that bike.”

Among other things, the bike has a portrait of Pope John Paul II on its tank. Numerous Catholic symbols are also displayed throughout the bike such as the coat of arms, the eucharist, Mary, a cross.

“It’s a very Catholic bike. So when you ride the bike people always ask, ‘Who is that guy on the tank?’ So that’s the beginning of the conversation about John Paul II and about Catholics. It is more of a kind of a witnessing more than anything else . . . You can take pieces of the bike and talk about certain aspects of the Catholic faith,” says Sztuk, who was born and raised in Poland. 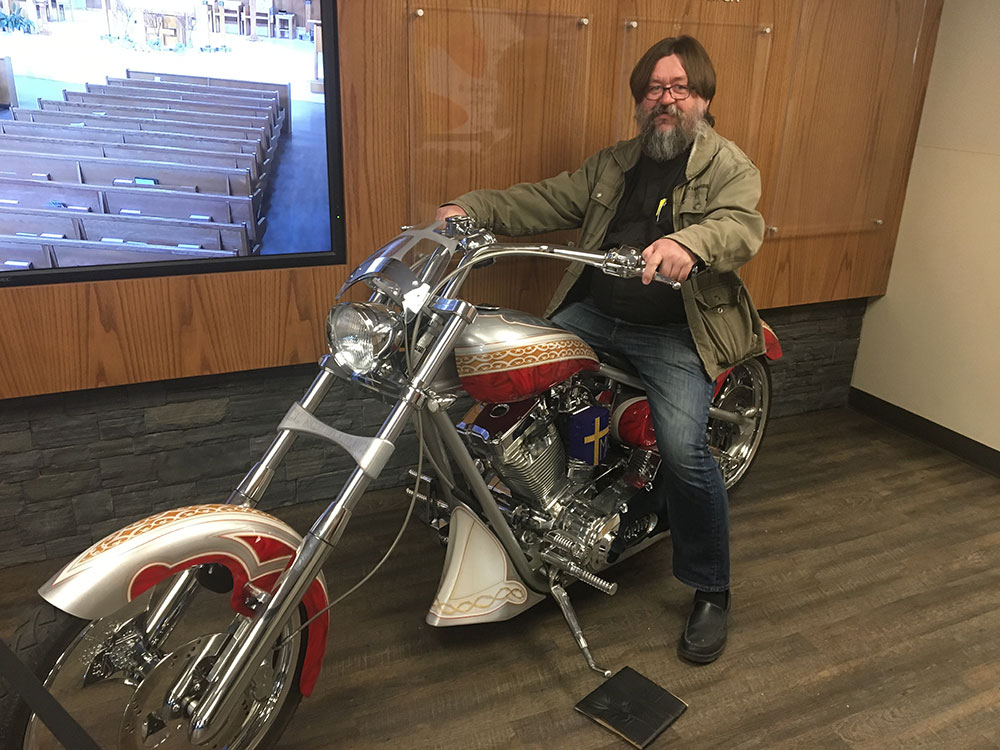 Father Mariusz on the motorcycle

He came to Canada in 2001 after working in India and in Africa for a number of years. This year is his 25th year of being a priest. His passion for his faith, for St. John Paul II, who was from his homeland, and for motorcycles all come together in this unique chopper. 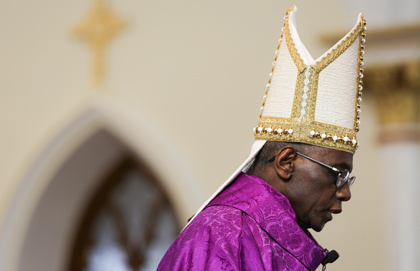 “Since I was a kid I always had a motorcycle. It gives me that relaxation. I can jump on the bike and go,” he said.

The story of the motorcycle’s journey into the hands of the good pastor is an adventure in itself.

It’s worth about $110,000 and it was commissioned years ago to proclaim the Gospel in the New York area.

“There was a lady out in Syracuse, New York who had the bike. It’s called the John Paul II Tribute Bike. It’s one of a kind. It’s very unique that everything about it is related to John Paul II in his pontificate. She knew I was a motorcycle enthusiast and I take ultra rides around the country. I go 5,000 miles in a few days,” says Cavins. “I went to speak in Syracuse not knowing about this bike. A deacon picked me up at the airport. Deacon Money was his name and he said he wanted to take me somewhere and show me something before going to the hotel.

“My first thought was, ‘Oh no I just want to go to the hotel. I’m tired. Been flying. I’ve got to speak tonight.’ And he said ‘I think you’re going to be interested.’ He took me to this warehouse. He showed me a bunch of Bibles in boxes on the wall. I thought that’s what he wanted to show me? Okay, Praise the Lord let’s go to the hotel now. Then he introduced me to the lady and I realized there was a sheet over something and I could tell by the shape of it that it looked like a motorcycle underneath a sheet. They took the sheet off of it and I was blown away by what I saw. This unbelievably beautiful piece of art. My first thought was man I’d love that for a teaching tool.”

The bike was originally commissioned for a church fundraiser which never took place and it sat in storage for quite some time with only nine miles on it.

After being exposed to the bike, Cavins never got back to the woman about possibly purchasing it. About nine months later, he was on one of his ultra-rides with Father Mariusz, Sean Lynn and others when the woman called him wanting an answer.

“I looked at Father Mariusz and I knew he would want to use this as well as myself and maybe we could do a joint venture on it where he both use it. I told her, ‘Give me a few minutes, I’ll pray about it and get back to you.’ I called her back after about 45 minutes or so and told her yes I was going to buy it,” says Cavins, adding that he bought the bike for “way, way less” than its value.

“It’s a teaching tool. You can stand there and teach many aspects of John Paul II’s theology. His Marian theology. Suffering theology. Eucharist. Don’t be afraid. You can use it as a tool.”

Both Cavins and Father Mariusz will be using the bike on both sides of the border for evangelization.

Our editor-in-chief bids farewell to legendary journalist George Jonas and ponders Pope Francis' call for a return to mercy that allows a return to sound judgment.

An Archdiocese Takes on TikTok

The Catholic Archdiocese of Edmonton has embraced the latest social media channels to spread the Good News to a wider audience, Mario Toneguzzi reports.