I want to be fluent in Spanish, but I don’t want to learn, not really anyway. These last six months, I’ve found myself immersed in the countries and cultures where such a thing is necessary and am engaged in a field where it will be helpful in the long term.

However, something deep within me resists being taught or corrected or subjected to the instruction of another. I don’t want to study or be challenged or have setbacks. But growth cannot come apart from these struggles. I will never achieve my goals in this space or in others if I find myself unwilling to fail, to be pushed by another — to be formed.

But wait…I was given the choice to engage in this course of study during the coming months and, indeed, I chose to do so. Is that not the epitome of freedom as our society defines it?

In his fascinating new book Why Liberalism Failed, Dr. Patrick Deneen explores the consequences of our society’s guiding definition of freedom. It’s not pretty. From an economic system that fosters staggering inequality to a State that encroaches deeper and deeper into the lives of its citizens, our centuries-long collective obsession with individual choice as the end-all is now straining the interpersonal fibers that bond us together and the resources of a planet that must support our insatiable demand for material improvement.

The way we define and pursue the word freedom is critical. Historically, I think we’ve gone off-base.

Aristotle saw freedom as the ability to choose rightly. His definition of ‘rightly’ wasn’t based on a particular religion, worldview, etc. It was based on the human need for some element of cohesion beyond the whims of personal choice for people to be truly free. He, and many other early thinkers, saw clearly the consequences of people being governed by nothing but their own desires. Such a condition, Aristotle suggested, is not freedom at all, but rather captivity to self absorption, laziness, and greed.

True freedom, by this definition, lies in the development of character. A coherent character will employ virtues or principles that enable self-governance beyond mere indulgence of our base desires.

In our modern, or more rightly said, post-modern, society, the concept of virtue is 100 per cent problematic. We no longer accept as a broader society the possibility that anyone other than ourselves is qualified to provide an overarching, universal account of right and wrong. And to be sure, people have, for millennia, been oppressed by top-down moral impositions. So, we can’t go back, and most of us wouldn’t want to even if we could.

Character — that thing which can allow us to be truly free — is the authentic embodiment, the fulfillment of a series of practices which can only be developed within specific communities and traditions with particular histories.

Still, we find ourselves locked in a way of viewing the world that lacks essential tools for coherent, fulfilling, peaceful, sustainable, co-existence. Ripped from the local places and communities that once helped us form meaning, we now are forced to create that meaning for ourselves as increasingly isolated individuals in a massive, impersonal society.

Ultimately, choice is and can be only part — a small part, in fact — of freedom. Whatever freedom I truly possess will express itself through my ability to: act rightly against my individual whims and cravings; be driven towards other choices worth making; and continue choosing rightly.

So, how do I manifest this freedom in my life today? What is demanded of me in order to choose rightly and thus be free from the bondage of my own weak, selfish desires? 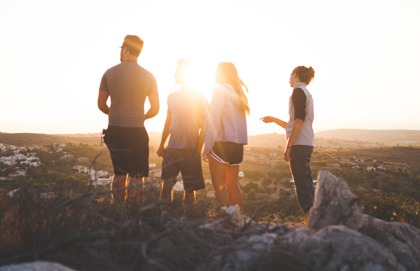 At a high level, I’d posit that the answer to the above is a simple: I need strong character. However, that word  “character” carries certain connotations in our society from which I want to distance my intent.

I’m not talking about character in the sense of my having an arbitrary, universal obligation to follow certain rules (also known as deontological ethics). Nor am I suggesting you might somehow be able to quantifiably measure my character today by the consequences of a particular act or set of actions (also known as utilitarian ethics).

Rather, character — that thing which can allow us to be truly free — is the authentic embodiment, the fulfillment of a series of practices which can only be developed within specific communities and traditions with particular histories.

So, that sounds good in theory, right? Or maybe it doesn’t. But what does “true character being best developed within specific communities” actually look like?

Back to my Spanish language struggles. Language learning is a fantastic exemplar of community’s role in character development. Alone, you will fail. You may learn lots of grammar and speak whatever language emerges, but it will not be aligned with the needs of the community. It will not serve a purpose greater than personal enrichment. It won’t really be Spanish.

Ultimately, in this scenario, I will be alone with my learning. Whatever crazy rules I create for myself to follow can just as easily be broken when my mood shifts (or when things get tough).

However, with a community to support me, I have grounding. I can be encouraged by others, formed by their understanding of the Spanish tradition. I can proceed with confidence.

I can know with certainty that this is the ‘right’ way because lots of other folks are formed rightly by this community — i.e., they all understand each other — and have been for hundreds and hundreds of years.

With a community behind me, it’s not that I have the right to go around boasting how I have all the answers and insisting everyone should speak just like me. But, to the extent I learn to live (as well as speak, read, write, and listen in this case) within the bounds of the rules set by this community, I can know that the way I am living is true.

If you buy this line of reasoning, the question then becomes, where is my community?

In reality, we have many such communities which help us define our identities  as citizens, employees, parents, friends, whatever.

There is nothing inherently wrong with these varying identities, but in order to live authentically, to live in truth, we have to get our priorities straight and know which community is most important; which will actually give us the power to speak and live coherently in this life while preparing us for the next.

Once we’ve made that decision, our task is to dive deeply into what it means to live coherently as a member of that community, rejecting those rules and practices which do not belong to that tradition and embracing more deeply those which do.

Now, don’t get me wrong. This isn’t a self-help essay. Making such a commitment to a single community — particularly an authentically Christian one — will place you immediately at odds with your other communities and the competing identities they would see you espouse. You can’t expect to speak multiple languages coherently at the same time, can you?

And, in fact, for this very reason, our culture teaches us to hold our beliefs, communities, relationships, our very identities loosely; to break free from the bonds of our particular circumstances, and to embrace limitless choice as an individual being.

But, in a world where you, the individual, are the only one with an opinion that matters, where does your meaning come from? Who are you anyway? What language are you speaking?

The political left and right both advocate for free choice as society’s ultimate good. Doing so, argues Cardus Researcher Aaron Neil, neglects the imperative of choosing the highest good that is God.

The WEIRD Pull of Social Polarization

Convivium contributor Josh Nadeau continues his series of occasional essays on how our Western, Educated, Industrialized, Rich and Democratic culture can overcome its built-in tension between freedom and safety.