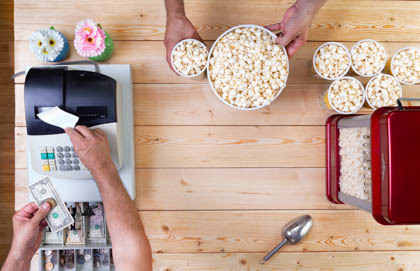 To use the words of our friend Milton Friedman, “There is one and only one social responsibility of business – to use its resources and engage in activities designed to increase its profits.”

You can’t live well or long without oxygen. You will die if you don’t have oxygen. But the purpose of human beings is self-evidently not to simply breathe.

The same is true for business.

Business will suffer and die if it does not make profit. Profit is a spur to development, wealth creation, and creation writ large. It is a good and necessary thing.

But to operate on the assumption that the sole purpose of business is to maximize profit will leave us impoverished as people and as a society, and, moreover, it will lead to the very thing that libertarians – and all of us I would imagine – fear most. It will leave us less free.

The resolution ignores the complex and yes, sometimes conflicting reasons for the conduct of commerce that real people, running real businesses, have when their alarm clocks go off in the morning. Yes, no business owners in their right mind wake up, stretch, and say “I’m looking forward to losing money today.” Most want to make money. And they’re right to do so.

But business owners, I would hazard, do not view their sole responsibility in terms of profit. They are much more interested in installing drywall, making sure their pizzas are hot and delicious and made in clean kitchens, in helping their clients succeed. They wouldn’t do it if they didn’t make a profit, but most care at least as much about the work as the money.

Understanding the proper purpose of business requires us to think beyond profit, and focus on what drives profits, namely creating. And when we think about why we create, we have think of the human propensity to “find a better way” to do something.

The resolution runs against the way that hundreds of Canadians and others around the world actually conduct their action as business owners. Most business owners – and especially small business owners who make up about 98% of all the businesses in this country – are content to start, build, and grow their business to attain a certain level of profit and then plateau, and, perhaps even taper off, depending on their station in life.

But let me up the ante and say that the resolution is also irresponsible. It makes an end out of something that was never meant to be made into an end, and, in doing so, neglects to pay attention to what it is that makes us human and makes us civilized. It ultimately leads to a dehumanizing and barbarous view of business and, as business is a human activity, leads you down the same path.

But before I explain why, let me get something out of the way:

Corporate social responsibility, as it manifests itself in most companies these days – especially the largest, publicly traded companies – is the equivalent of putting lipstick on a pig. And lest anyone think that this is an insult to pigs, it’s not. I think pigs are beautiful the way they are. Likewise, I think businesses are beautiful the way they are.

The notion that a company such as the Royal Bank of Canada is somehow being “socially responsible” by funding various clean-ups of waterways etc. that have next to nothing to do with their business model or supply chain is an insult to their customers. It reminds me of Johann Tetzel’s little pre-Reformation jingle: "As soon as a coin in the coffer rings / the soul from purgatory springs"

An Enabling Economy
Social Enterprise and Complexity - a brief report

But let’s be clear: most corporate social responsibility programs are really just line items on a company’s marketing budget. Such programs are, frankly, just another tool (and none of this is to suggest that cleaning up waterways is a bad thing!) used to garner or purchase, goodwill from the public so as to make the firm a more appetizing place to do business. It can be (though is not always) used as a smokescreen for less wholesome business practices. Or, to borrow from Luther’s response to Tetzel:  "It is certain that when money clinks in the money chest, greed and avarice can be increased."

Given the close relationship between the current corporate social responsibility model and marketing, and given that the driving purpose behind marketing is to increase profits, I find it somewhat strange that Friedman-lovers are so dead set against them. If the sole responsibility of a corporation is to "use its resources and engage in activities designed to increase its profits" then the type of corporate social responsibility programs undertaken by RBC, TD and others accomplishes that goal. Why the concern?

So, then, if the maximization of profit is the not the proper end of business, what is? My response is this: the thrifty creation of socially useful goods and services. A business is a human institution that facilitates, organizes, and promotes human creation. It is thus tied directly in with a type of economic vocation.

Understanding the proper purpose of business requires us to think beyond profit, and focus on what drives profits, namely creating. And when we think about why we create, we have think of the human propensity to “find a better way” to do something. Part of this is led by a drive for daily bread. It is facilitated and encouraged by thrift (efficiency of both time and money), but there seems to be something more holistic, more deeply human behind this that cannot be totally captured or explained by indicating that this is all driven by simply making it easier the drive to make a profit.

Take the opening lines of W.H. Auden’s poem Sext from the Horae Canonicae:

You need not see what someone is doing
to know if it is his vocation,

you have only to watch his eyes:
a cook mixing a sauce, a surgeon

making a primary incision,
a clerk completing a bill of lading,

wear the same rapt expression,
forgetting themselves in a function.

How beautiful it is,
that eye-on-the-object look.

To ignore the appetitive goddesses,
to desert the formidable shrines

of Rhea, Aphrodite, Demeter, Diana,
to pray instead to St Phocas,

St Barbara, San Saturnino,
or whoever one's patron is,

that one may be worthy of their mystery,
what a prodigious step to have taken.

to the first flaker of flints
who forgot his dinner,

the first collector of sea-shells
to remain celibate.

Where should we be but for them?

Auden paints a picture of creation as vocation – an experience which causes us to “ignore the appetitive goddesses” (generative things like dinner, sex, money, profits) in favour of attending to the material world in such a way that we give birth to something beautiful, and, importantly, something new, even if this means sacrifice (notice that Phocas, Barbara and Saturnino are all martyrs). Where should we be but for them? Animals at worst. Barbarians at best. Here’s Auden again:

wandering through forests without
a consonant to our names,

slaves of Dame Kind, lacking
all notion of a city

Of course for most of us, this ignorance of appetite isn’t permanent or total. The flaker of flint was crafting a spear head to hunt mammoth for dinner after all. Bodies can’t ignore their appetites, and neither can the social institutions that have a name drawn from the same root as the body: "corporations."

But Auden is right to note that when we create, either alone or together in corporations, we get carried away; we are "rapt." Our attentiveness to the material world and our development of it points beyond the strictly material and appetitive; it is a culturally generative, civilizational drive.

It is, a social drive; a drive towards the city which ultimately, as Robert Farrar Cappon notes in the last chapter of his book on the same theme –  "the Supper of the Lamb" – points to another, celestial, city. This drive can be directed immanently – as if human creativity will itself bring about that celestial city on earth – or it can be directed towards a god, or the God. But let us not take an impoverished view of business offered by many that ignores this drive. It is always present. Profit is a means, not an end.

I’d like to end with a short note about freedom. The relentless pursuit of profit is not a moral obligation, it is a choice, and likely one that will enslave rather than liberate a company or an individual. Again, growing companies, creating more, creating better things is something to be admired and encouraged. But consider the example of Bill Watterson, the creator of Calvin and Hobbes, whose personal decisions can, and should, be extended to the world of business.

"As my comic strip became popular, the pressure to capitalize on that popularity increased to the point where I was spending almost as much time screaming at executives as drawing. Cartoon merchandising is a $12 billion dollar a year industry and the syndicate understandably wanted a piece of that pie. But the more I thought about what they wanted to do with my creation, the more inconsistent it seemed with the reasons I draw cartoons.

"The so-called 'opportunity' I faced would have meant giving up my individual voice for that of a money-grubbing corporation. It would have meant my purpose in writing was to sell things, not say things. My pride in craft would be sacrificed to the efficiency of mass production and the work of assistants. Authorship would become committee decision. Creativity would become work for pay. Art would turn into commerce. In short, money was supposed to supply all the meaning I'd need.

"In a culture that relentlessly promotes avarice and excess as the good life, a person happy doing his own work is usually considered an eccentric, if not a subversive.

"Ambition is only understood if it's to rise to the top of some imaginary ladder of success. Someone who takes an undemanding job because it affords him the time to pursue other interests and activities is considered a flake. A person who abandons a career in order to stay home and raise children is considered not to be living up to his potential, as if a job title and salary are the sole measure of human worth.

"To invent your own life's meaning is not easy, but it's still allowed, and I think you'll be happier for the trouble."

Those, friends, are the words of a free man. And those who love freedom would do well to follow his lead both in their personal lives, but also in the way they think about business.