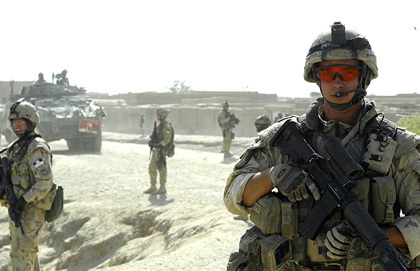 Rev. Guy Chapdelaine's first traumatic experience in grief counselling was not as a chaplain in a theatre of war but in Asbestos, a small Quebec village near Sherbrooke, where a couple of teens killed themselves in a suicide pact. One was a high school dropout Chapdelaine had been counselling.

"He and his girlfriend hanged themselves. Having to deal with their suicides prepared me to deal with any crisis," he says.

Chapdelaine, 53, became Canada's Chaplain General in August — the first Roman Catholic to hold the post in 10 years and only the second francophone since separate Catholic and Protestant chaplaincies were integrated in 1995. He will preside over the Remembrance Day ceremonies at the National War Memorial in Ottawa on November 11.

The calm and focused priest will be responsible for the direction of 350 chaplains of various denominations in the Canadian Armed Forces. The job, he says, is not to proselytize.

"The chaplain is there to care for all — even for those who have no faith. We minister to our own, and we facilitate the worship of others," he told Convivium recently over a leisurely breakfast in Old Montreal after celebrating Mass at the historic Notre-Damede- Bonsecours Chapel. "Our role is to make sure the spiritual needs of soldiers in a pluralistic society are met. A lot of the work is not sacramental. It is to befriend soldiers and listen to them. It is basically a ministry of presence."

The eldest of three children in a metalworker's family, Chapdelaine was 17 when he joined the 52nd company, now the 52nd Field Ambulance Company. He decided to become a priest after one of his army buddies was killed in a car accident. His unit was consoled by a priest who had a background in psychology and was a chaplain in the Reserves.

Chapdelaine studied for the priesthood in Sherbrooke and obtained his Master's degree in Theology and Biblical Studies at Université Laval in 1989.

He was ordained in Sherbrooke by Monsignor Jean- Marie Fortier, the same bishop who had confirmed him. He was promoted to the rank of captain the same day. At the time, the ordination was essential to become a chaplain.

"I really had no set goals for myself. I was content to be stationed in Montreal as the Land Force Quebec Area chaplain."

He was deployed to Kosovo, and the experience in the Balkans, he says, helped him concentrate his mind on questions of morality and mortality.

"It was a dangerous place, with minefields, but I never felt threatened. We didn't lose a single soldier on that mission. We all came back together. But I had to prepare myself and the soldiers for the possibility that we would be killed. I had to ask myself, 'Am I ready to die?' When you come face to face with the prospect of death every day, you start asking yourself questions about the meaning of life."

Chapdelaine recently attended the fourth European conference of military bishops in Paris, where he presented a short speech on "The Experience of a Canadian Military Chaplain in the Face of Death." He also attended the International Military Pilgrimage to Lourdes.

"You cannot give pastoral comfort to soldiers facing death unless you are aware of your own mortality," he says. "Personal preparation is a key element. Upon my arrival in Kandahar, I was keenly aware of the possibility of dying. One of my first visits was to the morgue — or, to be politically correct, what they call the mortuary business — and Kandahar Hospital, knowing that I could be called upon at any moment to offer a prayer over the remains of a soldier or spiritual comfort to the wounded.

"There was a strong possibility that I would be hit by an improvised explosive device during each of my trips outside Kandahar. Even inside our camp, death could strike. I recall one Saturday evening in the chapel when I had to stop Mass twice to seek protection from rocket attacks. On my first sortie outside the camp, sitting in an armoured vehicle, I was surrounded by journalists who, like me, were unarmed. The only person accompanying us with a weapon was a military photographer, and I sensed his fear at knowing that he was the only person who could respond in the event of an attack. My personal preparations were carried out intuitively, motivated by the real possibility that I would die [while] on an operation."

Soldiers, he says, don't often wear their faith on their sleeves, but that doesn't mean they are not religious.

He says he was first convinced of the need for chaplains when he was in Kosovo and Major General Tim Grant conducted a survey asking soldiers how the military could be improved. Among the things they wanted were more chaplains to minister to them.

A telling incident during a mission to Afghanistan made him appreciate that need.

"While visiting Masum Ghar, an observation post near Kandahar, I noticed that someone had scratched a verse from the 23rd Psalm on a ceiling beam: 'Yea, though I walk through the valley of death, I am not afraid, for You are with me.' It was a great moment for me to stumble across this simple message of faith in so unlikely and out-of-the-way place. It wasn't a chaplain who wrote that. It was one of the guys."

One of Chapdelaine's official duties was to accompany back to Canada a number of Canadian soldiers who were killed on the mission. He feels that ramp ceremonies on the tarmac are not the place for overtly religious expression. "Public prayer is not the best option at this moment. It is better to offer a private prayer, if it is the wish of the family. The role of the chaplain is usually to follow the coffins as they are carried from the plane."

While it is important to honour those who have died in the service of their country, he says, it is equally important to remember those who have been wounded, "not just physically but mentally as well, and that includes chaplains. Now that the Harper government has shifted the emphasis of the Canadian military from peacekeeping operations to combat missions that are euphemistically called managed warfare, the need is even more pronounced.

"We are not immune to combat-related injuries," he says. "Several of my chaplain colleagues are suffering in their bodies and minds from post-traumatic stress disorder. I remain convinced of the importance of achieving a deeper understanding and thus developing spiritual resilience. The Canadian Army favours a holistic approach that incorporates the spiritual dimension. Better initial and ongoing training can only contribute to superior mental and spiritual health, not only for chaplains but for the Canadian Armed Forces as a whole."

Reverend Chapdelaine's first priority as Chaplain General, he says, will be to recruit religious leaders for the military.

"It is increasingly difficult to find soldiers who are willing to become chaplains, especially in Western Canada. Fewer and fewer students are studying theology, and fewer and fewer of those who are want to join the Canadian Armed Forces. Seventy per cent of the Roman Catholic chaplains we have now will retire in the next 10 years," he points out. "It is important that training programs for non- Christian religions be developed as well in order to prepare future candidates for the chaplaincy. Given the demographics of the country, I believe the Christian presence in the military will diminish, and more and more faith groups will join the Royal Canadian Chaplain Service. This will probably be a better reflection of Canadian society."

While he supports the richness of pluralism, the challenge to those who participate in interfaith dialogue is to remain solidly grounded in their own beliefs. "When you meet people with other convictions, it helps you to go deeper into your own beliefs." The downside of pluralism, he says, is that it could compromise a person's religious beliefs.

"Secularization is a reality that must be acknowledged. The challenge to religion in the public sphere is that chaplains are sometimes tempted to seek comfort in an idealized view of the past and, out of fear of 'the other,' isolate themselves through an identity that is marked by withdrawal. In the face of changes within the chaplaincy, some chaplains are nostalgic for the past. It is not every minister or religious leader who is called upon to serve in the Canadian Armed Forces. It appears to me essential to have this openness and to recognize the richness of pluralism. Without this openness, it seems to me it would be difficult for a chaplain to function."

To stay grounded, Chapdelaine returns to Montreal to celebrate the Eucharist at Bonsecours Chapel two weekends every month. He says hardly anyone there is aware of his rank or position in the Canadian Armed Forces.