It has been a news week quite unlike any other I have experienced in more than 20 years of Catholic journalism. The “testimony” of the former papal ambassador to the United States, Archbishop Carlo Maria Viganò, which accuses Pope Francis and others of looking the other way on the predatory behaviour of (now former) Cardinal Theodore McCarrick, has created outrage throughout the Church – and great division.

The sexual abuse is already a public scandal. What I feared coming was the division within the church.

On the substance of the issue, predatory sexual behaviour, both gravely sinful and often criminal, by clergy, that story has accompanied me for my entire priesthood. The major Boston scandals broke in early 2002; I was ordained that summer just before the papal visit to Toronto, and the topic was the dominant one in Catholic news.

The news of this summer both tells us what we already knew, but is also new. The Pennsylvania grand jury report, which reviewed some 70 years of records, told us little new but did so in stomach-churning detail. Whatever the shortcomings of that report, it did give voice to those who suffered, who otherwise usually remain hidden for understandable reasons. And when a news story, even one as distressing as priestly sexual abuse, has been around a long time, it is possible for the impact to be lessened. The Pennsylvania report did not lack for impact.

But the bigger news story of the summer has been that of Archbishop Theodore McCarrick, who in June was suspended from all public ministry after a claim that he molested a teenage boy in the early 1970s was found “credible and substantiated” by a lay review board in the Archdiocese of New York. At the same time, it was revealed that there had been settlements in 2005 and 2007 with two men who accused McCarrick of sexual harassment (or worse) while he was a bishop and they were seminarians and priests. He resigned from the College of Cardinals in July, as an increasing number of voices claimed that his predations were widely known but  did not impede his rise in the hierarchy.

Now the Viganò bombshell claims that Pope Benedict XVI placed some disciplinary restrictions upon McCarrick – which he did not observe – and that Pope Francis lifted those and rehabilitated McCarrick. For that, Viganò says Pope Francis should resign.

What to say about all this? Everything is being said, as the Catholic press has been utterly consumed by it.

I would first state that to demand a papal resignation is highly premature and inflicts new wounds on the Church. We learned in 2013 that a papal abdication, freely embraced, is an unhappy thing. A resignation under a cloud would be a catastrophe, even if it became clear in time that it was a necessary catastrophe. But we are far from there at the moment. Benedict XVI’s abdication in the face of no crisis was entirely unprecedented in the history of the Catholic Church. Better to not repeat it if at all possible.

Where might there be resources to restore unity? The obvious answer is the perhaps the only one – in a closer adherence to Christ Jesus, who did not hesitate to call Himself the Good Shepherd. 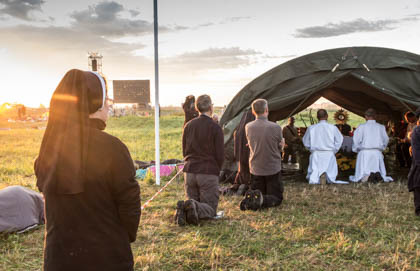 From Sea to Sea: Lessons in Poland
Francis, the decider
Pope Francis in Fast Forward

As for the charges themselves, though Pope Francis has decided, for the time being, to “not say one word” about them, a thorough investigation cannot be avoided. The American bishops are demanding one, and the pressure to know the whole truth is growing. Now that Viganò has become a whistleblower, any attempt to sweep all of this away will bring forth other whistleblowers. Sooner or later, and more likely sooner, an investigation will reveal what, if any, of Viganò’s charges are true.

But what is already evident is that the Viganò charges are being fought out bitterly in a divided Church. That division is a distraction from what the priorities in the sexual abuse scandal ought to be – justice and healing for the victims, penance and purification for the clergy, authentic reform to serve the evangelical mission of the Church.

In 2010, when The New York Times led a charge against Pope Benedict XVI, accusing him of mishandling cases of priestly sexual abuse, there was an instant rallying in the Church to the pope’s side, even before a careful evaluation of the charges was possible. Quite soon, the Times’ case fell apart. Even before it did, there was a default setting in favour of unity, and the centre of unity, the universal pastor.

Now, the charges are from “inside” as it were, so they are more serious. But it remains startling how they have been welcomed or rejected akin to a partisan political scandal. One would expect that the starting position of Catholics would be to hope and assume that the Holy Father is not compromised. No longer; there are voices that are practically gleeful that he might be.

This doleful state of affairs has been growing these last three or four years. Pope Francis himself has recourse often enough to harsh condemnations of those who disagree with him in the Church, and his most enthusiastic supporters in the Catholic commentariat can be vicious. Now that a bitter controversy has engulfed Rome, the foolishness of that approach lies evident for all to see. For they sow the wind, and they shall reap the whirlwind – Hosea 8:7.

That divisiveness is regrettable in tranquil times but is doubly painful in times of crisis. Viganò’s intemperate explosion is a product of that; it is unimaginable that he would have written in the manner he did even a few years ago. Likewise, while the Pope remains silent, his defenders attack Viganò’s character as the means to discredit his charges.

This time, it seems that the truth will come out. The pressure is too great and the Viganò testimony, though flawed, too authoritative. But the Church will live these difficult months divided against herself.

Where might there be resources to restore unity? The obvious answer is the perhaps the only one – in a closer adherence to Christ Jesus, who did not hesitate to call Himself the Good Shepherd.

In the daily liturgical readings assigned to every priest in the Catholic “Liturgy of the Hours” or the “breviary”, two entire weeks are given over every autumn to reading the fearsome denunciations of the prophet Ezekiel, called to “prophesy against the shepherds of Israel … who have been pasturing themselves!” Accompanying Ezekiel 34 in the breviary are excerpts from Augustine’s long sermon on pastors.

As the Church lives this period, cognizant of the failings of her pastors, which has inflicted grave pain on the victims of their wickedness, Augustine’s words will resonate more intensely than before:

Listen, sheep of God, listen and learn: God will call the bad shepherds to account for his sheep and for their deaths. As he says elsewhere in Ezekiel: Son of man, I have appointed you as sentry to the House of Israel. When you hear a word from my mouth, warn them in my name. If I say to a wicked man, “Wicked wretch, you are to die,” and you do not speak to warn the wicked man to renounce his ways, then he shall die for his sin, but I will hold you responsible for his death. If, however, you do warn a wicked man to renounce his ways and repent, and he does not repent, then he shall die for his sin but you yourself will have saved your life. You see, brethren? Do you see how dangerous it is to keep quiet? If you remain silent, you die; and rightly. You die for your impiety and sin – it is your negligence that kills you.

The quiet has been broken. The negligence exposed. The reckoning will now come. God will call the bad shepherds to account.

Filmmaker Wim Wenders’ new documentary is an admiring, albeit necessarily incomplete, portrait of a Pontiff determined to push the Roman Catholic Church away from its past, writes Convivium contributor Daniel Bezalel Richardsen.