I recently attended a seminar on land use where the speaker, an English professor, suggested that the best thing that one who wanted to work with natural resources could do would be to read Milton.

Yes, the 17th century Renaissance polymath: John Milton. While this was not followed by the corollary that we English folk should also go and read Adam Smith, I assume he was arguing for that balanced perspective for which the liberal arts education is designed.

But can Milton have much to say about how we are to use our natural resources?

The postmodern world might speak of being beyond those old-fashioned dualisms between reason and imagination, science and religion, facts and fiction (et. al), but there is still a temptation to think that truth is only a "matter of fact." And a student who has focused upon the "facts" of chemistry, physics, and calculus might think that the annotation of Paradise Lost is an entirely irrelevant undertaking. But without stories, we would not be able to make sense of even the most basic observations; facts need to be oriented within a story in order to have any meaning. 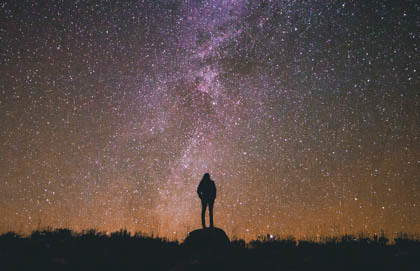 For instance, take this fact: the world is a place possessing an abundance of life.

In our 21st century context, this might be one of the most important "facts" facing generations of students who are increasingly being encouraged to find "useful" (ie. money-making) careers that will support the economy. As a Canadian I am aware of the vast riches we have in minerals, natural gas, oil, lumber, fresh water—the list goes on—but the "fact" of such abundance does not necessarily mean we have any idea how to use it well.

As battles rage over how we are to use our resources, we are confronted with the question: what is the best story into which we place the "fact" of our abundance? You may find yourself intrigued by issues of environmentalism and stewardship, yet repelled by the confusion with which both often present their cases.

Recently I found help from an unlikely source: a 1634 Mask entitled Comus, written by John Milton. Seriously. The story centers upon Comus, a demi-god characterized by excess, who lures an unnamed Lady to a palace filled with every sensual delight. Intriguingly, when the Lady and Comus enter into a battle of words, they rely upon two completely different narratives in regards to the uncontested fact that the world is a place of unspeakable abundance.

Comus argues that the earth's bounty suggests a God who invites hedonism and if one would forego indulgence "Th'all-giver would be unthank't, would be unpraised" (l. 723). Since, Comus goes on, "[b]eauty is nature's coin, [it] must not be hoarded / But must be current" (739-740), the wealth of the natural world is a wealth of resources and commodities which must be consumed. For Comus, the insatiable consumer, the world was made to use promiscuously. Or so his story tells him.

The Lady, however, refuses to buy into such a "juggling" of logic. Here we see how her virtues of temperance and abstinence speak to a life beyond the physical appetites of the individual. In fact, her story suggests that the individual is the smallest unit out of which such virtues of self-restraint are to radiate outwards into the family, into the community, and into the world. The Lady argues that Comus' view is "bent" (to use one of my favorite Miltonic words) towards favouring the privileged and abusing the natural world. Therefore, she says that a proper use of the land's abundance would be to curb our natural desires through temperance, or self-restraint, in order that "Nature's full blessings would be well dispens't / In unsuperfluous even proportion" (772-773). Also, presumably, in order that Nature would continue to be abundant for the many, not simply the few.

Comus and the Lady were confronted with a world teeming with material goods, but their stories influenced the way they thought about that world and how they acted within it. Not that this simplifies matters at all. When we are confronted with a fact, there is never just one story into which it might fit. In fact, there are usually multiple narratives that compete for our allegiance and shape our behaviour. But I do like the Lady's story and think it the proper one. She does not suggest we abscond from our mandate to use the world, but she asks that we exercise self-restraint in our use, always keeping an eye outward to the marginalized.

Buffered from the Storm