About 15 years ago I was sitting in the Maple Leaf Lounge at Toronto’s Pearson Airport with a group of newspaper executives, sipping cocktails and preparing for flights home after receiving instructions from our Toronto masters.

“Well,” I recall one saying, “Maybe it won’t be that bad.

“Remember,” he continued, trying to look on the bright side, “when we all thought putting ads on the front page was going to be the end of world and it wasn’t?”

There was a brief silence.

And so we trudged off in our suits to the nation’s leading cities where, with the very best of intentions and equipped with bad ideas, we would resume managing the end of our worlds without noticing that was exactly what we were doing.

It was hard not to think back to that conversation these past weeks while the nation’s economy bled billions of dollars thanks to a railway blockade that traumatized the national government and its police forces for close to three weeks. It would have been easy to assume, judging from the grim expressions and firmly set jaws of cabinet members, that a nuclear device or some other weapon of mass destruction had been strapped to the underside of a major highway overpass in Toronto. Or that demands had been livestreamed from some crazed terrorist preparing to put innocents to the sword were his demands not met. 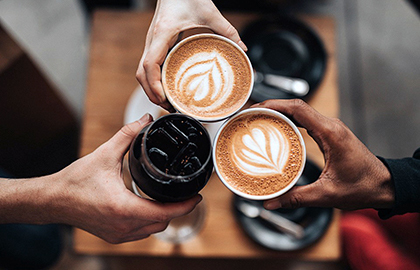 But no. Upwards of 60 vessels still sit idle outside the nation’s ports awaiting shipments because the rail traffic serving Canadians was drawn to a halt. This, due to a single solidarity protest by a couple of dozen people on a rail line 5,000 km away from British Columbia’s Bulkley Valley, where five people held a dissenting view regarding process, land title, law and economic development within their peer group of 13 hereditary leaders among a population of about 5,000 people, 80 per cent of whom favour economic development. In a country of 37 million people.

Gulping hard and following what appears to have been the stern advice of provincial premiers to suck it up buttercups, the government’s incident response team, finally decided that yeah, well, I guess, maybe, shucks and shuffle, the law has to be enforced. And, yes, being a grownup sucks.

Police became police again. Order was restored. The flow of trade resumed. But one could not fail to notice that as it did, the rhetoric of protest escalated with even greater pace. At the time of writing, the frenzy of pearl-clutching among those with absolutely nothing at stake in this affair was such that it appeared all hope had been abandoned for reconciliation between Canadians of differing ethnic and cultural histories. Ever.

One expects the Wet’suwet’en people of the Bulkley Valley and the five hereditary chiefs will sort out their end of the debate over how and whether it’s OK to have a pipeline and its many jobs within their communities. May they find peace, inclusion, prosperity, hope and some balance between individual and collective ambitions. There is less expectation, however, that the rest of us are capable of dealing with the very real consequences of the trend l’affaire Wet’suwet’en has revealed.

It is that the socio-political emphasis on the supremacy of individual rights over collective rights accelerated by establishment of the Charter of Rights and Freedoms has completely run the intellectual table. If the past three weeks are anything to go by, the dismissal of collective entities and their priorities of things like jobs, food and heating fuel has hit levels so corrosive that leaders, policy makers, investors and the rule of law itself are increasingly incapable of defending their own institutions let alone the rest of us.

After all, it is hardly coincidental that in the midst of the blockading of a vital national rail line, Teck Resources came to the realization that its shareholder value was at risk from actions the government has signaled its reluctance to suppress. So, Teck walked away from its $20 billion investment in northern Alberta and the prosperity of First Nations within it. In less than four years, more than $125 billion in energy projects have been forced to flee the country. And to think it was just 1982 when Star Trek’s Mr. Spock sacrificed his fictitious life based on the other- worldly logic that the needs of the many outweigh the needs of the few. How times and pop culture have changed.

Politicians who once sought the support of silent majorities (collectives), increasingly appear to seek benefit through increasingly unique minorities. Majority favour can be won, it seems, based on how effectively tiny subsets are embraced. It is not a practice one would wish to criticize except for what appears to be the increasingly significant unintended consequence that there is little sense – at least outside of Quebec – that collective rights are even, as they say, a thing at all. Or even ever were.

So, the collective rights of women in sport, for instance, are now subservient to the individual rights of people with masculine muscle mass who identify as women and wish to compete in sports as women. Women are treated as irrelevant if they object. The measure of how religious minorities (it’s arguable that all people of faith are now within that classification) are treated is not measured by our tolerance for a leader’s affiliation with faith, but solely by our generosity to those within numerically small communities whose clothing ignores the conventions of an otherwise dogmatically secular society. Why can’t it be both?

Add to that the invention a few years ago by Canada’s current Prime Minister of something called “social license,” which means nothing is approved unless even the smallest, most intransigent minority group or belief approves of it – and you have the remarkable convergence of bad ideas that some believe has led to the beginning of our end.

Somewhere along the line, something important to us – something that balanced our sensitivity with stability and an admiration for the common welfare – must have changed.

And we didn’t notice.

In striking down laws against physician-assisted suicide, the Supreme Court of Canada used the Charter of Rights to eviscerate 800 years of legal wisdom first captured in the Great Charter—or Magna Carta—and based on the immutable link between God and the rule of law.

Eyes light up in a place of serious darkness. "Common Life" features Canadian voices articulating perspectives on those things that connect us.