For those of us following American politics, the past few weeks have been dramatic, culminating in the written confessions of the disgraced former FBI director James Comey’s newly released a book, A Higher Loyalty.

In the book, Comey shares new details about the fateful conversations he had with Donald Trump before meeting his inevitable demise, a mixed blessing so many have encountered after hearing Trump's catchphrase: “You’re fired.”

Ghostwritten with utmost sincerity and goodwill, Higher Loyalty articulates a values-based, new ethical approach to leadership that has the net impact of explaining both his own actions over the past two years, and calling his readers to a higher level in their professions.

Unfortunately, at a time when shared moral and ethical consensus in politics is at an all-time low, it may be tough for some to heed Comey’s call to a “Higher Loyalty.” Given the present situation, just what values are we supposed to become loyal to? Whose values are we seeking? Comey’s values? Why would we want to follow them?

The irony of the title A Higher Loyalty undercuts the stated intent of the book. It is meant to play on a conversation Trump had with Comey before firing him, where he asked Comey for his loyalty. Superficially, it suggests Comey has something to say about loyalty to higher values ­– values which would presumably supersede leaders such as Donald Trump, and which would therefore not reach very high. But it then suggests Comey’s own values are the kind that would allow a person to entitle a book in such a snarky manner based on one side of a private conversation.

Cheap-shots in a book’s title, it seems, are the kind of value to which we are called. They might be called a Comelian value.

But as our mothers would urge, let’s not judge a book just by its cover. If we are to learn from his words of wisdom, and become ethical leaders ourselves; if we are to respect our call to a higher loyalty despite whatever values may inform that loyalty, we should be open to the truth of what Comey has to say. In his own words:

“Ethical leaders do not run from criticism, especially self-criticism, and they don’t hide from uncomfortable questions. They welcome them….I don’t love criticism, but I know I can be wrong, even when I am certain I am right. Listening to others who disagree with me and are willing to criticize me is essential to piercing the seduction of certainty. Doubt, I’ve learned, is wisdom. And the older I get, the less I know for certain. Those leaders who never think they are wrong, who never question their judgments or perspectives, are a danger to the organizations and people they lead. In some cases, they are a danger to the nation and the world.”

We cannot, if we seek to live meaningful lives, burrow ourselves into a Cartesian doubt hole, however warm and comforting it may be.
Related Stories 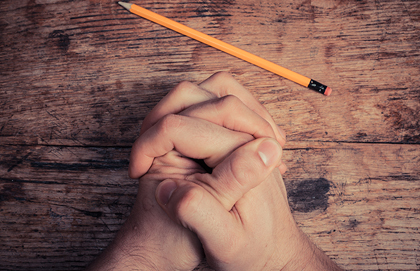 What is Truth?
Full Disclosure
Faith in the Present Tense

As Comey suggests, ethical leaders need to be open to criticism, and given that he has deemed himself an ethical man, we should apply some criticism. Specifically, lets take the phrase “doubt, I’ve learned, is wisdom.”

We might ask dubiously: is doubt really wisdom? Wisdom is a body of knowledge and principles acquired by an individual. Doubt is uncertainty and lack of conviction about knowledge and principles. Doubt, then, seems fundamentally distinct from, and most likely the opposite of wisdom. If I doubt whether I am writing the words on this page, am I wise? If I doubt that you are a reader, are either one of us wiser?

By becoming more uncertain about the nature of things, we do not become wise. We become less trusting and potentially more confused about the nature of our surroundings. At least on this point, Comey seems far off  the truth. We can, nevertheless, thank him for his humble open-mindedness to criticism, given that by his own definition, he is an ethical leader.

He goes on to articulate his view that ethical leadership is based upon values that ground the individual in decision-making, and serve as reference points. His axiom, it seems, is that a person should be motivated by the truth first and foremost: “Without fundamental commitment to the truth – especially in our public institutions and those who lead them – we are lost.”

In this manner, Comey has tapped into a thread in fashionable political discourse that focuses intensely on truth telling, fact checking, and fake news.  Articles and books are now published to explain the political conundrum we find ourselves in with Big Data and Big Media. Without delving too far down this rabbit hole, it is important to note that truth seeking of the kind Comey espouses is rooted in Enlightenment thinking.  Enlightenment thinking upholds the superiority of reason, a kind of razor sharp intellectual capacity that unites us and can cut through falsehoods.

While this may be part of our human experience, the cutting cannot continue indefinitely. We cannot, if we seek to live meaningful lives, burrow ourselves into a Cartesian doubt hole, however warm and comforting it may be. This is especially true in the case of ethics because ethics involve our bodies and our actions as much as they involve our sharp rational intellects.

What seems to be missing from Comey’s book, and from current political conversation, is, simply put, God. What is missing is an understanding that Truth and God are co-related to each other, as Saint Thomas Aquinas famously detailed in articulating the Christian perspective on Truth, and as Peter Kreeft has summarized splendidly in his essay “Truth Goodness and Beauty.”

The irony of the title A Higher Loyalty undercuts the stated intent of the book.

As Kreeft puts it:

Comey asks his readers to seek A Higher Loyalty. Indeed, we ought to seek a higher loyalty but to God, not to our own will. And let’s not forget that Truth, Goodness, and Beauty are inextricably linked to our Creator, and that Truth, wonderful as it may be, is part of a much bigger picture.

In his convocation address to a private religious college, the holder of the Kennedy Smith Chair in Catholic Studies at McGill urges graduates to return to core Christian truths to go forward in the world.

Faith in the Present Tense

Compelled by the depth of simultaneous faith and suffering articulated in Kate Bowler’s Everything Happens for a Reason and Other Lies I’ve Loved, reader Hannah Marazzi emerges challenged to examine the complex intersections of suffering and faithfulness, trusting, and questioning.