“We have inherited a garden, we must not leave a desert to our children.”

— Statement signed on October 4, 2021 by Pope Francis and 40 faith leaders

Two countries that were consistently in the glare of international media headlines until recently because of religious persecution by the extremist group ISIS, are now suffering silently under another calamity. Millions of people in Iraq (according to tradition the location of the Garden of Eden) and Syria are struggling with the consequences of climate change, in addition multiple wounds inflicted by terrorist violence, poverty, political insecurity and COVID-19.

With voices amplified by the world’s focus on COP26, religious leaders have joined activists, scientists and humanitarian organizations in calling on prosperous countries like Canada to address climate change as a global issue that affects populations far beyond their own borders.

“More than 12 million people in Syria and Iraq are losing access to water, food and electricity and urgent action is needed to combat a severe water crisis,” said a report published last summer by 13 humanitarian aid agencies including the Danish and Norwegian Refugee Councils.

“Iraq is struggling with drought conditions exacerbated by climate change,” confirmed a Beirut-based official of the UN Environmental Program (UNEP) who preferred to remain anonymous. In an e-mail to Convivium, she said: “Less rain impacted the final yield of the two major crops; wheat and barley. Evidence shows that people in some areas have insufficient food consumption affecting their coping strategies – such as borrowing money or eating less food.”

Massive displacement of people due to changed climatic conditions is another reason for Canada and the international community to help these Middle Eastern countries.

In the run-up to COP26 held in Glasgow, Pope Francis and approximately 40 faith leaders, gathered together in Rome, and signed a statement calling for “decisive international political action to combat climate change and to safeguard, restore and heal our wounded humanity and the home entrusted to our stewardship.”

The faith leaders represent an estimated 84 percent of the world’s people who identity with a faith, and include Christianity, Islam, Judaism, Hinduism, Sikhism, Buddhism, Confucianism, Taoism, Zoroastrianism and Jainism.

Christian leaders present at the signing in the Vatican included Pope Francis; Bartholomew I, the Ecumenical Patriarch of Constantinople (known as the “green” Patriarch for his environmental advocacy) Metropolitan Hilarion of the Russian Orthodox Church, and Archbishop Justin Welby of Canterbury, representing the Anglican Communion.

The Dalai Lama, the spiritual leader of Tibetan Buddhism was not present at this meeting, but over the years, both he and Pope Francis, have actively engaged in advocating for action to combat climate change, and have even blessed the efforts of Greta Thunberg, the Swedish poster child of climate activism. 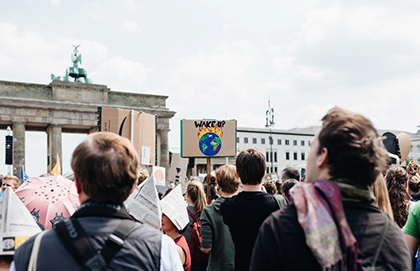 The religious leaders who had gathered at the Vatican for the pre-COP26 meeting emphasized the pressing need for action, not in the distant future, but in this decade, especially by countries that are mainly responsible for most of the world’s the carbon emissions.

“Our faiths and spiritualities teach a duty to care for the human family and for the environment in which it lives,” said the document that they signed. “We are deeply interdependent with each other and with the natural world.”

Calling on wealthier nations and those with the greatest responsibility to combat climate change, they appealed for action at home by reducing carbon emissions and financially supporting vulnerable countries to adapt to and address climate change.

The religious leaders did not single out Syria and Iraq, yet both are case studies of vulnerable countries that are ill equipped to deal with the massive climate change problems they are facing. According to the Max Planck Institute, the prestigious science and technology research organization in Germany, many cities in these countries could become uninhabitable before the end of the century unless drastic action is taken.

Although years of war and conflict, poor governance and mismanagement by local authorities have contributed to the dire situation, pollution knows no borders, and countries like Canada with high levels of greenhouse gas emissions, have a responsibility towards finding solutions, say experts.

Many cities in these countries could become uninhabitable before the end of the century unless drastic action is taken.

“Canada has the highest greenhouse gas emissions per person among the world’s 20 largest economies,” Sean Holman, Wayne Crookes Professor of Environmental and Climate Journalism at the University of Victoria, BC, told Convivium. That doesn’t include the greenhouses gases created when other countries burn fossil fuels we’ve exported to them. So, this means, as the world’s third largest oil exporter as of 2018, we can do a lot for the whole world by just reducing our own emissions.”

The massive displacement of people due to changed climatic conditions is another reason for Canada and the international community to implement policies to help these Middle Eastern countries mitigate the effects of climate change.

“With hundreds of thousands of Iraqis still displaced and many more still fleeing for their lives in Syria, the unfolding water crisis will soon become an unprecedented catastrophe pushing more into displacement,” Carston Hansen, Regional Director of the Norwegian Refugee Council wrote in the report published by 13 NGOs.

“Forced (internal) migration due to environmental degradation is increasingly felt in the southern parts of Iraq,” the UNEP official told Convivium in an e-mail. “A decrease in water flow and water quality has left the agricultural sector unable to provide sufficient and sustainable livelihood opportunities in rural areas.”

Canada and its allies could use their influence in the General Assembly of the UN to lobby for an expansion of the definition of refugee in the UN Convention to include those fleeing environmental disasters, suggested Jasmin Lilian Diab, Director of Migration Studies at the Lebanese American University in Beirut. “It is a matter of placing this on the agenda and on the list of priorities of major players at the international level,” she said in an interview.

The current UN Refugee Convention formulated in 1951 covers only those persecuted in their home countries because of race, religion, nationality, social or political affiliation.

“It does not, in principle include, people fleeing as a direct result of climate change,” said Sebastian Juel Frandsen, Press and Communications Advisor to the Danish Refugee Council said in response to a query from Convivium.

Iraq and Syria might never again return to the Garden of Eden state of environmental perfection. But as these Middle Eastern countries—which form the cradle of human civilization itself — begin to disintegrate under drought, heat, and water and food shortages, governments, international organizations and individuals of all faiths or no faith have compelling reasons to act upon the world’s religious and secular leaders’ appeal.

In an interconnected and inter-dependent world, there is no viable option but to stop the decline of any country into a wasteland unfit for human habitation.

Photo by Yoda Adaman on Unsplash.com

Seeing the Greening of Canadian Politics

A question period in his university class revealed to Ben Roy the likely shift in our policy and culture as his Millennial peers and future voters apply an environmental lens to every issue.

Silent Witness of a Holocaust Suitcase

Susan Korah reports on a Canadian family that helped solve the mystery of a teenage girl’s life and death at Auschwitz.