Last week I wrote – in advance of the centenary of the armistice at the eleventh hour of the eleventh day of the eleventh month – about the century-long consequences of the Great War for politics and culture, including the place of faith in our common life.

The commemorations last Sunday in France were understandably light on drawing out those conclusions, as commemorations of the war dead are not suitable occasions for a critical evaluation of the war’s prosecution. I was struck this week by a column from Convivium friend George Weigel, who wrote in First Things about those consequences:

The Great War also deepened and intensified the secularization of the West, as one religious leader after another joined the parade of homicidal nationalists, jingoes, and social Darwinists whose bombastic appeals to base (and often racist) emotions helped preclude a negotiated settlement before the collapse of Romanov Russia and the exhaustion of imperial Germany made the Armistice inevitable.

One notable exception to this massive default in religious leadership was Pope Benedict XV, the most understudied and underrated pontiff of the twentieth century. Had he been listened to by the great powers of the day, things might have been different. But Benedict was dismissed as an irrelevance, the carnage continued, and the question posed by Aleksandr Solzhenitsyn 35 years ago—Did World War I terminally sap the strength of Europe?—remains an open one today.

In terms of how the Great War changed everything, the reference to Pope Benedict XV prompted for me a more local reflection. Not about what happened on the global stage, or at the war front, but about what happened here at literally on the home front for Catholic students at Queen’s University. The great tapestry of history is woven from the threads of thousands of such stories.

On the eve of the war, the first Catholic chaplaincy for students – in a very Protestant Ontario – was formed at the University of Toronto. Queen’s Catholics, given their rivalry with U of T, did not want to be left behind, but nothing materialized since they considered their numbers to be too small. Queen’s then was less than 2000 students, of which Catholics would have been only a small fraction.

Matters changed, though, in 1917, when war politics came to campus. At the spring convocation, the honorary degree was awarded to a visitor from England, then engaged in war against Germany with her Canadian allies. (Our records do not recall his name – perhaps for the best.) 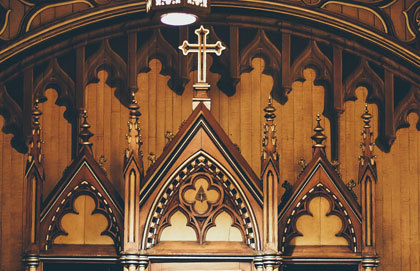 Division in the Church
Francis, the decider
From Sea to Sea

Matters changed, though, in 1917, when war politics came to campus.

In his survey of the wartime scene, the convocation address got around to Pope Benedict XV’s earnest and urgent peace initiatives. To say that they were ignored in the chancelleries of Europe would be to understate the case; they were disdained. Queens’ convocation speaker had disdain for the man who made them too.

“All the Kaiser has to do is press a button on his desk and his jack-in-the-box in the Vatican jumps up and yells 'peace,'” he said.

This did not sit well with the Catholic students, who thought that a) Benedict XV was not the Kaiser’s puppet, an b) whatever one’s views of the papal peace initiatives, disparagement of the Holy Father was rather out of place at convocation.

The riled up Catholic students went to see the principal, who agreed with their grievance and granted the apology which the students requested. The experience of organizing and being heard at the highest levels of the university changed the way that the Catholic students thought about themselves and their place at Queen’s.

A few months later, on October 26 1917, the “Newman Club at Queen’s” was established, named in honour of the great 19th-century Catholic convert and man of the university, Cardinal John Henry Newman. (The chaplaincy at U of T was also named after Newman, as would be the one at McGill.)

At the time, there were 59 Catholic students enrolled on campus, and 30 of them became original members of the club. The first president was a medical student, Harry Fleming, who later practiced medicine and was elected as the MP for Humbolt, Saskatchewan.

The chaplaincy has been active at Queen’s ever since, but not continuously. In the 1920s the Newman Club hosted a speaker who, in rather fervent Irish spirit, indicated that he thought Canada would be better off without the monarchy. The Queen’s student union was aghast, judging it to be treasonous, and suppressed the Newman Club as punishment – rather light punishment, given that treason was then a capital offence!

After a few years, the relevant students had graduated. The punishment was considered rather severe, given that what a guest speaker says is not properly attributed to the position of the hosts, who may just want to hear him out. It’s not an entirely unreasonable position for a university club to take, even if it’s a lesson that still needs to be learned today. In the event, the club was restored and has, with its lights and shadows, strengths and weaknesses, being going ever since.

I suppose our Catholic chaplaincy at Queen’s would have got going at some point, and perhaps under more congenial circumstances. But the proximate cause indeed were the controversies over the Great War and the role played by Pope Benedict XV. The great river of history swept up and carried along the Queen’s Catholic a century ago.

Father de Souza has been the chaplain at Newman House, the Roman Catholic Chaplaincy at Queen’s University since 2004.