During the visit of Pope Francis to Egypt last week, most of the attention was on Christian-Muslim relations against the backdrop of the lethal persecution of Christians at the hands of Islamist jihadis. It was a moment of solidarity, and a most welcome one.

Yet a more important moment of unity came in the common declaration signed by Pope Francis and Pope Tawadros II, head of the Coptic Orthodox Church. There the two shepherds addressed the question of baptism:

In obedience to the work of the Holy Spirit, who sanctifies the Church, keeps her throughout the ages, and leads her to full unity – that unity for which Jesus Christ prayed: Today we, Pope Francis and Pope Tawadros II, in order to please the heart of the Lord Jesus, as well as that of our sons and daughters in the faith, mutually declare that we, with one mind and heart, will seek sincerely not to repeat the baptism that has been administered in either of our Churches for any person who wishes to join the other.

Catholics already recognize any baptism done with water (pouring or full immersion) with the proper Trinitarian formula to be valid. Protestants or Orthodox who convert to Catholicism are not re-baptized. In Egypt, Catholics who wish to join the Coptic Orthodox Church are generally re-baptized, though it has been a matter of shifting practices in recent decades. The issue is a live one, for the Catholic minority is tiny in Egypt, and it is not unusual for Catholics to marry Orthodox, who are the majority Christian group. Those weddings usually require the Catholic bride or bridegroom to become Orthodox, and thus the question of re-baptism arises. 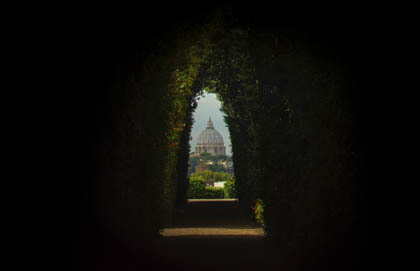 The joint statement doesn’t say that the Orthodox will recognize Catholic baptisms as valid as a general principle, but commits the Coptic Orthodox to “seek sincerely” not to re-baptize. It is a clear step in the recognition of common baptism and momentous for that reason.

Baptism has several effects. It washes away sin, both original sin and actual sins. It fills the soul with grace, the very life of God – it is no longer I who live, but Christ who lives in me. It incorporates – literally inserts into the body – the baptized into the body of Christ, the Church, of which Christ is the head. It also makes one a member of that society, that assembly, that ekklesia, we call the Church.

It is the last two effects that give rise to disputes over baptism. If the emphasis is on the membership of a society, then it follows that the shift from one such society to another requires a new rite of initiation. However, if the emphasis is on incorporation into Christ – and membership in the Church is a consequence of that – then there is already a shared unity in baptism, and re-baptism is not necessary.

If the emphasis is on the membership of a society, then it follows that the shift from one such society to another requires a new rite of initiation. However, if the emphasis is on incorporation into Christ – and membership in the Church is a consequence of that – then there is already a shared unity in baptism, and re-baptism is not necessary.

In the Catholic tradition following the Reformation both approaches were in play. A convert to Catholicism from Protestantism would be given a “conditional baptism”, meaning that if the person was already validly baptized the rite was superfluous, but if not, a new baptism had taken place. That acknowledged that non-Catholic baptisms could be valid in principle, but cast doubt on them in practice. For the last several generations though, the Catholic practice is no longer to conditionally baptize, but to recognize the validity of all baptisms done with proper rites.

The immediate consequence of this is to recognize that across the Christian divisions we are already brothers and sisters in Christ, that in our common baptism we share a real and substantial unity in Christ, even if our communion in the Church is imperfect. Although it is easy to lament the slow pace of ecumenical progress toward full communion, the recognition of unity in baptism is no small thing, and a powerful sign of Christ’s prayer for the unity of the Church bearing fruit in our time.

Pope Francis has spoken in recent years of an “ecumenism of blood,” that the martyrs of our day offer a common witness to the Lord Jesus for whom they were killed. Visiting, in the company of Pope Tawadros, the Orthodox church where dozens were killed just last December, Pope Francis’ ecumenism of blood, Catholic and Orthodox together, was painfully and beautifully manifest.

Ecumenism of blood, or the ecumenism of common works of mercy, cannot replace the ecumenism of the sacraments, the sign of full communion in Christ. That is why, while it got relatively little attention, the joint declaration in Egypt was the real highlight of the papal visit.

Deborah Gyapong's journey brings her home to Rome while remaining an Anglican.