Last week, Cardus's program director for Work and Economics, Brian Dijkema, sat down with the CEO of Christian Horizons, Janet Nolan, to talk about labour shortages, productivity, and the surprising economic and community benefits that come when disabled people are freed to work.

Brian Dijkema: At Cardus we've done a lot of work on labour supply problems in Canada's economy. How do people with disabilities fit into that equation? Is there a way to bring disabled people into this conversation?

About 20 years ago, we established some global work in developing communities with the idea that we would go and bring our expertise from Canada and help policy makers in governments, in churches and educational facilities, to include people with disabilities.

We quickly learned that our approach to creating social programs and charitable environments for people with disabilities isn't going to work in a developing community. We had to be a part of broad economic development, community development, sustainability, capacity-building initiatives that was good for everybody including people with disabilities.

And what we've learned over those 20 years is that's exactly what we need to do back here in Canada.  People with disabilities in Canada have largely been recipients of social programs. And there is a good place for social programs—I'm not suggesting anything otherwise. But they've been largely left out of training, out of economic development programs, out of legislation that benefits people who are marginalized to be included in the workforce. And that's a huge loss for Canada. So when you talk about labor shortages, when you talk about skill development, when you talk about economic growth, people with disabilities can help. They have something to offer.

This morning we had two significant speakers recognize this. I just about jumped out of my chair when I heard both of them speak about the inclusion of people with disabilities in economic development plans.

Janet: Take my friend Adam. Adam is a young man. He's 21 years old. He's graduated from school. He's done all the things that all children in Canada do when they go to school.  And now that he's done school, he's without anything. So his family are compelled to piece things together;  they have a little bit of a program here and a little of a program there. Adam would do an amazing job working in a service sector industry where he had the same job maybe day after day after day. He's a man with Down syndrome. He needs to learn the skills that are needed in that environment. He needs to be able to contribute.

Work means that Adam is a productive man that adds value to that work environment.  It means that he has a place to go every day. That he gets up just like you and I do and feels good about himself which transcends into his mental health. It transcends into his physical health. It transcends into his lack of reliance on the system from social programs. If Adam doesn't work—if Adam is sitting at home all day—I guarantee you that within a very short while Adam will now be reliant on social programs and day supports and all the sorts of things that cost the taxpayers quite a lot of money. And he doesn't need these things—he needs to work. He needs to be a part of this. 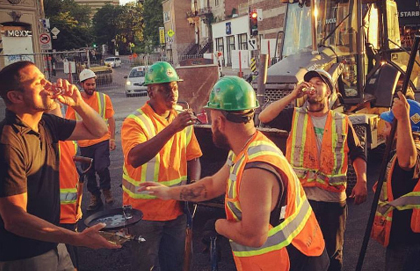 Brian: Why is this not the case right now? What barriers are standing in Adam's way? Is it cultural? Is it political? Is it economic?

So right now, if my friend Adam wanted to go to college to learn a trade, maybe he wouldn't become a master chef, but I guarantee you that he could definitely do a program that certifies kitchen skills and safety skills. That at the end of it, he could have a certificate or a diploma that says "I can go to any restaurant in this city. I can go to any conference hall. And I could do a great job. And I would be there for many years as a great employee."

What needs to change is public perception, access to training—real training programs—not social programs that we call training programs. There needs to be an effort on behalf of government and organizations like us to push business owners and employers not only to see that the right thing that they should do—including people with disabilities—but the economic impact of including people with disabilities.

Brian: It's the business case.

Janet: It's the business case.

Brian: You hinted that we need to use government to get disabled people in. What are you looking for specifically?

Now what I'm hearing is that citizens with disabilities need to be considered as we lay out the framework of economic development. And that's what we need government to do. We need government to see bigger things than social programs. Whether it's in colleges and universities, whether it's in economic development programs for a community, whether it's in an initiative around mining and resources or whatever ... the automotive industry; disabled people need to be a part of it.

What do I want government to do in Canada? I want government to continue to include people with disabilities in their conversation, not as recipients of charity but as members of our society. I want to see them promote programs and opportunities for bridge-building that allow organizations like us to be a part of those conversations, because I think we have some great things to offer.

We can tell stories of success where a person with disability who has been a long-term recipient of government funding from a social program has now turned the corner and is working and paying for their own rent and no longer has to receive government subsidies in order to live. Those are incredible stories.

Brian: Are you saying you want to cut programs that people need?

Janet: Absolutely not. In fact, right now in Ontario, there are probably about 12,000 people that receive services from the Ontario government-funded programs. And there are 20,000 people on the waiting list. You might believe that all the programs and social settings that are required by people with disabilities are in place but that's absolutely not the case. There needs to be a gigantic investment from funders into social programs. There's no question. It is horribly underfunded. However, that cannot be the only solution.

All of the investment in the world is not going to make the right difference. There are so many people on the waiting list—that's real. But we're not going to make a difference in the lives of people who have disabilities unless we change how it is we have people with disabilities within the community. Having people within communities is such a rich reality—literally and figuratively—so much more than simply as recipients of a program.

I love when Premier Brad Wall said this morning that "we need to complete the sentence." He talked about a shift from welfare to income supplement: awesome. But I think there's another part of that sentence that needs to get written about people belonging to communities in which their God-given gifts are valued and respected.

I heard change in a philosophy from a social program that government pays for. I didn't hear the next jump about where she now is fully included as a citizen. I'd love for people to talk about that next step.

It's got to be the expectation for policy, governance, laws and legislation, programs, institutions, that people with disabilities are fully included as citizens. And that's when the sentence will be finished.

Cardus Work and Economics Program Director Brian Dijkema reflects on the opportunity that construction season provides us to celebrate the "vast array of talents and skills that it takes to keep a country and its economy functioning."