In early April 1883, while Fred Scott, a highly self-contained 22-year-old Montrealer, was in England studying to become an Anglican priest, he called upon John Henry Cardinal Newman, the Roman Catholic convert who was far and away one of the greatest religious philosophers of the 19th century. Newman impressed both his ideological allies and his adversaries with his intelligence and his persuasiveness. Scott was a high church Anglican who regarded the theologian as "one of those rare and great characters whose power lies in the charm and the fascination of their personality. It is thus that he appeals in a peculiar way to men of views most opposed to his."

Newman was bent on returning the Church of England to the supremacy of Scripture, communion, confession and fasting, which had largely fallen by the wayside since Henry VIII named himself temporal head of the Church in the 16th century. In his tracts, Newman argued that except for its leadership, there was nothing in doctrine to distinguish the Anglican Church from the Roman Catholic Church. Newman had been ordained an Anglican priest in 1824 and was made vicar of St. Mary's four years later. By 1828, he had begun writing concise and lucid critiques of the Church of England, arguing that because its evangelical followers were divided on a number of fundamental issues, it did not offer the key to salvation. "The simple question is," Newman wrote, "can I . . . be saved in the English Church? Am I in safety, were I to die tonight?"

He was joined by other theologians who made up the so-called Oxford Movement—John Keble, Edward Bouverie Pusey and Richard Hurrell Froude—which set out to divorce the Church of England from political influence and return it to the liturgical dogma and practices of the Anglo-Catholic Church of medieval times. These Tractarians, as they were called, believed in the doctrine of transubstantiation and in other practices such as praying for the dead and private confession, which Anglicans denounced as "popery." Newman became a Roman Catholic in 1845 and, without ever having been a member of the Roman Curia, was named a cardinal in 1879 by Pope Leo XIII.

All of this was heresy to the established Church of England, especially in Montreal, where anti-papal sentiment was widespread among the Protestant population. Scott admired Newman and had hoped to study theology in Montreal, but Bishop William Bond objected to his high church ideals and refused to ordain him. Hence, Scott made his decision to study for the priesthood in England.

Upon his arrival at Oxford, Scott befriended Matthew Bridges, an author and poet best known for his hymn "Crown Him With Many Thorns," who had followed Newman into the Roman Catholic Church. Although Bridges had been born in England, he lived in Quebec for a number of years. Bridges arranged Scott's meeting with Newman.

You can read Scott's impressions of the visit at Montreal's McCord Museum, in an unpublished manuscript he submitted to a Boston newspaper in 1903. By then, Scott was the rector at St. Matthew's in Quebec City, which he had turned into a bastion of Anglo-Catholic worship. 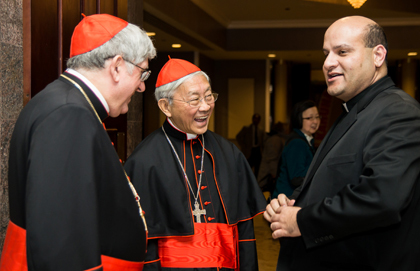 At the time of Scott's visit, Newman was living in Birmingham in "a large red brick building on a long and dusty street up which a tramway ran. There was no romance about the place," Scott tells us. "No medievalism cast a charming witchery over the secluded religious life within."

The Cardinal's residence, Scott wrote, had all the institutional charm of "an ordinary Roman Catholic building in Montreal or Toronto." He was escorted down a long corridor and asked to wait in a spartan room furnished with a table and two chairs. An engraving on the wall framed with a broad oak band caught his eye. It was inscribed in Latin: Fili hominis putasne vivent ossa ista Domini Deus tu nosti—Can these bones come back to life? Lord, you alone know—(Ezekiel 37:3). After a short wait, Scott was ushered to Newman's quarters in a "smaller but very plain building," where he found himself face to face with his hero.

"I will not say I was disappointed, but I experienced a shock, the shock that everyone feels on first meeting a great man—one whom we have dreamt about, and one whose imagination has been clothed with ideal glory. The aged man before me, who rose and gave me his hand and motioned me to a chair, tottered so feebly, I could hardly realize was the Cardinal Newman of my dreams, the exquisite writer, the subtle reasoned, the celebrant at Littlemore on those cold, dim mornings so long ago of which he writes. The form which had been once tall and commanding was now bent nearly double with age, and the face was shrunken and deeply furrowed with time and the jaw drooped slightly. But on the face was a tender, settled calm—the calm of evening—the light which lingers in the sky after the sun has gone behind the hills. And his eyes . . . such eyes—I will never forget them; they had that dreamy far-off look in them which told of the pure soul within. As he sat and spoke, he seemed all the time to be looking far away over some sea or wide plain, to where the shining battlements of the New Jerusalem, the City of God, were growing hourly clearer through the mist."

Newman appeared to be familiar with the political scene in Canada because, Scott tells us, he had been briefed by his friend Lord Durham 50 years before. Durham was the Governor General of British North America in 1838 whose report into the circumstances surrounding the 1837 Rebellion famously noted that Canada consisted of two nations warring within the bosom of a single state. "[Newman] said Lord Durham had informed him that by far the most interesting and cultured people in Quebec were the French; the English colonists as a whole were rather uncivilized," Scott quotes the Cardinal. They also talked about the controversy surrounding the decision by James Stewart, the third son of the 7th Earl of Galloway, to leave England in 1807 to do missionary work in the Eastern Townships. Stewart, who would become the second Bishop of Quebec in 1826, built the first Anglican church in the Townships at Frelighsburg in 1809.

Had it not been for the issue of celibacy, Scott, too, might have become a Roman Catholic convert. He had recently become involved with Amy Brooks, a crisp, practical woman who was to become his wife. His meeting with Newman seems to have strengthened his conviction that priests should be allowed to marry.

"There was something, to me, infinitely sad in the solitariness of the poor old man—no woman's hand was near to tend and comfort him, no children were there to bring back to him the old memories of youth in which the aged find such solace. The generation in which he had really lived and moved had all gone, and he was left alone. No doubt the loving care of his spiritual sons was round him, but still, he was alone like some broken spar which the sea has cast up on a barren strand. But the very loneliness and isolation were a glory and a light separating him from ordinary men and casting round him the medieval colours of sainthood."

When the visit ended, Newman walked Scott to the chapel and stumbled and almost fell as they went down some steps.

"I thought of offering him my arm, but did not like to do so. In spite of his feebleness, he made the customary genuflections in the chapel and knelt down for a few moments of silent prayer."

Scott said goodbye, and Newman told him, "If you are ever in this neighbourhood again, we shall be very glad to see you. That is, of course, if we are here, for it is very uncertain whether we shall be here much longer."

Scott was ordained in England in 1886 and returned to Canada, where he became a poet of some renown. He fathered six children, including F. R. Scott, the lawyer who helped draft the manifesto for the Co-operative Commonwealth Federation, the forerunner of the New Democratic Party. He served parishes in Drummondville and Quebec City, and might have been forgotten except for the fact that when the First World War began in 1914, he volunteered as an army chaplain at the age of 53 and, against the advice of his superiors, served in the trenches. He became the Senior Chaplain of the 1st Canadian Division, was wounded and wrote about the experience in his memoir, The Great War As I Saw It.

At a Cardus-Convivium event five years ago, China’s Cardinal Joseph Zen warned sharply of dangers to the Catholic Church in courting the Communist regime. Fresh events, Father Raymond de Souza notes, show the Cardinal was prescient as he was pointed.

Not All That We Desire

As Canada began coming together in a confederation 150 years ago, considerations of faith were at the forefront of the debate. Convivium contributor Alan Hustak writes that only one bishop in Quebec openly supported the original union. Even those not adamantly opposed, such as Catholic Archbishop Pierre-Flavien Turgeon, tepidly termed it a mere lesser of two evils.