This blog by Cardus senior fellow John Seel was originally published at the Evangelicals for Social Action Spiritual Life blog.

Believing it to be gold, Captain John Smith sent an entire shipload of pyrite to London in the early 1600s. Known as “fool’s gold,” pyrite is actually an iron sulfide, a mineral of limited value. Like Smith and his shipment, we tend to think that all our ideas are pure gold, when in fact they may often be more like pyrite.

We think first in pictures and tend to frame those pictures according to our values and understanding of reality. The frames we use determine what we see, determining which facts count as reality. If the facts do not fit our frame, the facts bounce off and the frame stays. So, too, in our individual takes on reality.

Since the rise of modernity, highlighted by the Enlightenment in the West, our arguments tend to adopt a dichotomous either/or frame. Such dualistic framing is neat, clean, and reductionistic. It suggests that the positions an individual takes—whether A or B—is somehow not tainted or influenced by the opposing position. It infers pure states and is most often offered with an air of hubris. “Look, look, I’ve found gold!”

Lived experience is not so easily reduced to pure states, to A-vs-B dichotomies. Lived reality is tainted with an uneasy and ever changing mix of A and B. The lines are blurred, the colors mixed, the motives conflicted. Reality is more 3D than 2D—more opaque angles than straightforward reasons, more picture than proposition, more poetry than prose.

This is not to say that truth does not exist, only that it does not come as an unalloyed good within human experience. Pure truth is an abstraction, not a lived experience. Human knowledge is always alloyed—a composite of truth and falsehood, belief and doubt, confidence and uncertainty. Human experience is intrinsically contingent. Postmodernism has exposed the overly confident, unduly abstract nature of Enlightenment thinking. It means that all that I believe I must accept with a measure of humility, an openness to correction, and a willingness to see the same truth from a different angle. 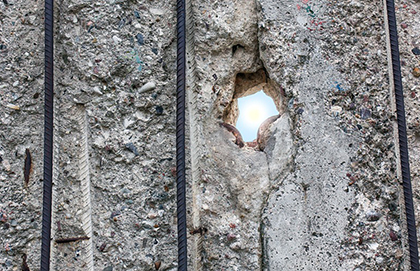 At issue is not what I believe, but how many angles inform my faith. It is in this sense that we are all secular now. We are all touched by an acute awareness of alternative positions to our own. The price of pluralism and hyper-modernity is an increased acceptance that all belief is an alloy—infused from its inception with contestability, never held in a pure state. Truth exists, but it’s not as clear as some would assume (or wish).

Those who believe in absolute truth, what some call “true truth,” sometimes find this admission to the limits of human knowledge hard to swallow. They hear relativism. But the polymath Michael Polanyi, who explored how tacit values influence scientific discovery, and all who have acknowledged a 3D world after him do not necessarily embrace relativism. Rather, they embrace the possibility that some of our angles on the truth are incomplete, inadequate, or just plain wrong. As the Apostle Paul reminds us, “we know in part.” So do those apart from faith: They, too, get some of the story broadly correct.

Philosopher Charles Taylor (A Secular Age, 2007) and others recognize the “cross-pressured,” “contestable” nature of belief in the modern world. They acknowledge that this is a new and distinctive human experience. We might still speak of “God” and “faith,” but how we believe has changed. Take sexuality. God made humankind, male and female. But in a fallen world and more importantly in a modern world, what constitutes marriage and gender is more up for discussion than ever before. One should be surprised if this were not the case. Such is the “contestable” nature of belief and life in modern experience.

A consequence of the collapse of the Enlightenment project is a wider recognition of the 3D nature of reality. With the insights of neuroscience, we’ve come to see that the assumed superiority of the left brain has left us seeing a 3D landscape as a 2D map. Much is lost in translation. One can hear the grinding of gears as persons try to fit a 3D experience into a 2D frame. In the end, it cannot be done.

In The Master and His Emissary, neuroscientist Iain McGilchrist suggests that the West has biased the brain’s left hemisphere over the right and as a consequence has lost the ability to see reality as a whole.

In Western philosophy for much of the last 2,000 years, the nature of reality has been treated in terms of dichotomies…. Philosophy is naturally given, therefore, to a left hemisphere version of the world, in which such divides as that between the subject and the object seem especially problematic. But these dichotomies may depend on a certain, naturally dichotomizing, “either/or,” view of the world and may cease to be problematic in the world delivered by the right hemisphere, where what appears to the left hemisphere to be divided is unified, where concepts are not separated from experience, and where the grounding role of “betweenness” in constituting reality is apparent.

In every conversation, listen for the frame: Is it either/or or both/and? As people who believe strongly in creation and the incarnation and the messiness it entails, Christians should naturally gravitate to 3D lived existence over 2D abstract fabrications. We would be wise to walk away from the Enlightenment’s left-brain, either/or framing. It is the consequence of bad philosophy, theology, and neuroscience. Like Pascal, we must say, “I can never forgive Descartes ...”

We would be wise to embrace complexity and contingency, humanness and fallibility. This is to adopt a humble attitude. As Sir John Templeton admonished, “Inherent in humility resides an open and receptive mind. We don’t know all the answers to life, and sometimes not even the right questions have been revealed to us.” What is, however, being revealed to us is the coming generation of millennials, who are largely abandoning 2D framing. For them it is a non-starter. And from them we have much to learn.

Lived experience also unearths a second painful reality. Most believers in the pew are living a forced 2D reality—the natural results of the standard evangelical gospel. As a result, the happy smile is sometimes a façade. Anglican priest David Runcorn observes,

There is nothing sadder than a Christian fellowship where every song must be victory, every prayer full of faith, every member always smiling and joyful. It is an exhausting pretense to keep up for long, and it condemns those who cannot hide from their fears to further pain of failure and inadequacy. It is actually dishonest. It means that we can never offer our tears as well as our smiles, our questions as well as our certainties, our wounds as well as our victories. It means that we are always keeping Christ out of the very places in our lives where we need him most—our darkness, uncertainties, and fears.

In fact, no one in the pew is actually living a 2D reality. Life is not like that. In every congregation exist unacknowledged addictions, culturally conditioned idolatries, familial dysfunctions, and subtle workplace compromises. But we are careful not to go there so as to maintain the pretense of the “good” Christian. It’s no wonder that our children gag at this institutionalized hypocrisy. It is the opposite of the authenticity that they cherish.

In moments of self-honesty, an appropriate fear arises from the admission that there might be additional angles I have not considered or mixed motives behind my rationalizations. That’s 3D spirituality—and what the coming generation is looking for—an earthy dirt-under-the-nails humanness. Fear not, truth is strong enough to stand up to the reality of humanness as it has done from the beginning of time.

It is time to embrace a 3D world and to set sail unpretentiously, carrying our cargo of beliefs with humility and a genuine openness to the gold that others might possess. We’d best learn from Captain Smith’s error.