John the Baptist, the one who prepares the way for Jesus even while in the womb (cf. Luke 1:41-44), is a principal figure of Advent. Therefore, Luke – whose first two chapters give us all those beloved scenes in Nazareth and Bethlehem and Jerusalem – takes great care to introduce his readers to the Baptist. He does so as he opens the third chapter of his Gospel:

In the fifteenth year of the reign of Tiberius Caesar,
when Pontius Pilate was governor of Judea,
and Herod was tetrarch of Galilee,
and his brother Philip tetrarch of the region
of Ituraea and Trachonitis,
and Lysanias was tetrarch of Abilene,
during the high priesthood of Annas and Caiaphas,
the word of God came to John the son of Zechariah in the desert.

John went throughout the whole region of the Jordan, proclaiming a baptism of repentance for the forgiveness of sins, as it is written in the book of the words of the Prophet Isaiah:

A voice of one crying out in the desert:
“Prepare the way of the Lord,
make straight his paths.
Every valley shall be filled
and every mountain and hill shall be made low.
The winding roads shall be made straight,
and the rough ways made smooth,
and all flesh shall see the salvation of God.”

Another obscure Biblical passage full of strange names which mean nothing to us today? Hardly. Luke is not giving us a history lesson. He is telling time in the way that ancient cultures did, by specifying who was in charge. For example, instead of us writing “the fall of 2018,” we might follow the ancient custom and write “while Doug Ford was premier of Ontario and in the first term of John Tory as mayor of Toronto.” That narrows it down to just a few months, which more or less served in the ancient world. 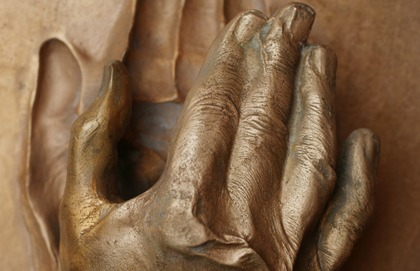 Sea to Sea
Cardinal Sarah, Man of Prayer
From Sea to Sea

Luke is giving us a Biblical chronology, telling what happened when. “Chronology” comes from the Greek chronos, the measurement of time. We get words like “anachronism” and “chronicle” from chronos. Biblical Greek has another word for time, kairos. This is not so much a precise measurement as it is a moment and its meaning. It is employed when the devil departs after tempting Jesus only to return at an “opportune time” (Luke 4:13) or when Jesus weeps over Jerusalem because it did not recognize the “time” of its visitation (Luke 19:44).

We are not merely counting down the days to an anniversary, not simply chronicling the passage of time and the recording of history.

The various rulers listed specify a chronicle of the time. In the Greek culture, chronos is personified by the bent, stooped elderly man, suffering the ravages of time. All those rulers in the list have been so ravaged, the once mighty whose names are obscure today.

It is the prophecy of Isaiah which gives the meaning of the Baptist’s coming. In applying to the Baptist the fulfillment of Isaiah’s prophecy, Luke reveals to us that God is powerfully at work in this John, son of Zechariah. We sometimes think of prophecy as predicting the future, a look ahead in chronos but it is more accurate to think of prophecy as kairos, revealing the deeper meaning of events. The prophet is more oracle than chronicle, though both dimensions are present.

That’s our challenge in Advent and Christmas. We are not merely counting down the days to an anniversary, not simply chronicling the passage of time and the recording of history. We are called to live Advent as kairos rather than chronos, living the true depth of the moment. It is not so much that there are so many days left until Christmas, but rather that what happened at that first Christmas allows us the fullest understanding of the days that we are now living. Indeed, the prophecies of Isaiah – behold, a virgin shall conceive – tell us more about what endures today than our daily chronicle.

A digital magazine is rather immersed in chronos. But we try at Convivium not to be imprisoned by it, which is a bit easier in this Advent season.

Hosting Robert Cardinal Sarah last week, Convivium Editor in Chief Father Raymond de Souza found himself face to face with one of the great Christian lives of our day, and alongside the exemplification of prayerful disposition.