Around the world, the aggregate annual growth of new city dwellers moving in from elsewhere is measured in the millions. Where, exactly, do all these people end up living?

John Bentley Mays wrote an article in the Globe and Mail in May that featured an interview with Antony Wood, the Executive Director of the Council on Tall Buildings and Urban Habitat. According to the article, Mr. Wood suggested that there are really only three major options for the 200,000 or so people that arrive in cities around the world every day. These options are towers, sprawling suburbs, or informal developments (slums).

It seems that as a percentage of overall population growth, Canada's urban growth will follow generally the global pattern. The red line in the chart below approximates our current point in time and you can see from the United Nations data I used to generate the graph that as a percentage of overall growth, urban growth is projected to slow down. That doesn't mean that the actual numbers of people around the world who are looking for a place to live in our cities is small. As noted above, we need places to put a lot of people in cities every year.

In each of the three categories of urban housing, the human factors involved in the design or informal evolution of those living spaces is critical. Planners, architects, developers, and civic leaders must attend to the way in which each form of organizing space supports or erodes the social resources of the inhabiting people. 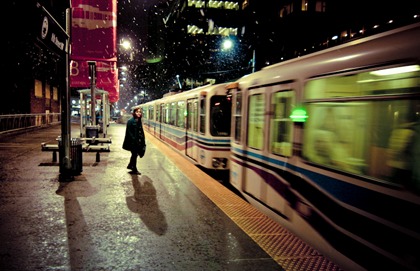 Suburban developments gave us the personal estates we dreamed of, our escapes from the disease-ridden overcrowding of industrial landscapes. But they appear to have been less dreamy in their use of resources, their impact on social cohesion, and their creativity quotient. Not all contemporary urban problems should be laid at the feet of suburban sprawl. Low density development was (and is) driven by many complex cultural and economic influences. But in terms of housing those 200,000 new city dwellers, it is vital that we learn how to craft the most effective suburban developments possible—including retrofitting them wisely where they are in need of renewal or intensification. This is where work like the Atlas of Suburbanisms can make a contribution.

Informal developments (slums, favelas, shantytowns, and so on) are an ancient and persistent feature of city development. Around the core of those with enough resources to build homes and own property are fringes (or unclaimed territory within the city proper) where land is used piece by piece in an unofficial (not formally approved) way. This isn't to imply disorganization—informal settlements often operate with a highly functional elegance, making the most of very scarce resources. But in light of growth projections, more innovations will be critical for informal development spaces: getting clean water and waste treatment into such places after the fact; allowing land ownership to be established after the fact; introducing structures for justice and regulation..

An important feature of growing cities is that they will be vertical. When land is scarce and thus expensive, and we need to be a reasonable distance from core employment areas, towers become the solution. We know that not all vertical building serve human beings equally well. The high density residential towers of Pruitt-Igoe in St. Louis in the 1950s are iconic examples of getting the human mix wrong. It is hoped that new ventures such as the Absolute Towers in Mississauga represent a major advance in designing vertical living spaces. Aesthetics generate a lot of attention, building quality and design matter for long term safety and comfort, but the telling feature will be the way in which our vertical building contributes positively to sustaining human community and connectivity. How do vertical buildings enhance the idea of neighbourhoods? They do, of course, but we are still learning just how they might be designed to do that well.

The quality of social experiences and patterns in cities has a profound effect on the way we think, feel, and even persist in given spaces. If our sense of belonging, understanding, and cooperation are enhanced by the features of our geography and built environment, we will have a much different sense of place than if those same qualities are impaired or eroded. As Jan Gehl in Cities for People points out, spatial design that not only sells properties but that truly contributes to vital human community will be essential as we continue to facilitate, build, and design to accommodate the new urbanites.

They're arriving now, on our imagined doorsteps.

Here are a few things that can foster this re-weaving, in no particular order: hospitality (invite people over); common recreation (set up a neighbourhood baseball game); worship (connect to your tradition in an actual location); time in public places (parks, squares, festivals, concerts); embracing...