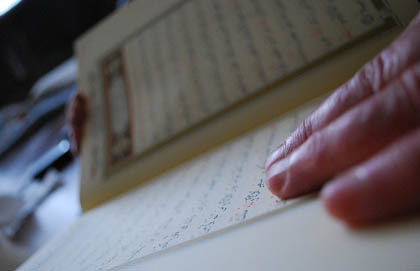 From work to play, with family or friends, at home and abroad, Habeeb Alli incorporates his Muslim faith in every sphere of life.

When I met Habeeb in Toronto at a talk on the fight against religious violence, he introduced himself as someone who is passionate about sharing the history of Islam in Canada, and has lots of stories about his faith community up his sleeve.

As the Community Development Manager at International Development and Relief Foundation (IDRF), he works on poverty alleviation programs based on the Islamic principles of human dignity, self-reliance, and social justice. He has also been involved in a wide variety of community projects centred on bolstering Islamic culture in Toronto.  Recently, he worked with the Toronto Police Department as a consultant on the incorporation of the Hijab into uniform protocol. Habeeb is an Imam, a chaplain, and an activist. On top of all that, he has authored 17 books on the topic of Islam, Guyana and poetry.

I talked with Habeeb about his work in the Muslim community in Toronto and the evolving nature of Islam in the Canadian cultural context.

The Thread: First of all, can you tell me a little about yourself? What is your story? What are you focused on these days, with work and in your personal faith life?

Habeeb Alli: While I’m now part of the Muslim community here in Toronto, I originate from Guyana, South America. When I was a young man, at the tender age of being a teenager, I was a hippie looking for spirituality. I found myself all the way into India, where I was dabbling with different spiritual paths, and finally came to Islam. That’s where I had the option to formally learn the Islamic faith, Arabic and Urdu.

Now, I’m very interested in interfaith work. I grew up in Guyana where my mother was Hindu and my father was Muslim. My neighbours were Catholics and I went to a Christian school- so I was very much exposed to various religions from an early age. As much I am an Imam and I serve as a Chaplain in the prison system in Canada, I strongly believe that interfaith dialogue is very much congruent with Islamic values.

TT: One of the first things you said to me when we met is that you want more people to know the history of Islam in Canada. It seems that you've spent your life's work pursuing this cause. You've authored over a dozen books on Islam, and you were involved in the Understanding Islam Academy. What makes you passionate about taking the time to share stories about your faith with people today? What motivates you to spend your time and energy towards educating people on Islam?

HA: I feel the need to share whatever I believe in, and to respond to people who find objections to my faith out of ignorance. Many years ago I got inspired to start writing in the newspapers in Guyana when certain individuals would write articles that misrepresented Islam. So I started writing letters to the editor and correcting them, saying “this is the history of Mecca,” or “I think you’re misunderstanding the way women are treated in Islam,” and responding to whatever came up. This is really where I grew passionate about educating people on Islam. When I came to Canada, my interest continued. I started writing blogs, books, etc. And my passion has grown.

TT: I know you have a deep interest in the Dundas Street Mosque, Toronto’s first Muslim place of worship. Can you tell me any stories about this historic site? What do you know about the first congregants of this mosque?

HA: That first Mosque in Toronto in the 50’s was formed out of a sense of community and not necessarily a sense of ideology. Muslims came together from Albania, Turkey, Pakistan, India, South Africa, and Guyana. It was a nexus for the Islamic population.

When the Mosque broke up, it was unfortunately on an Ideological basis. You know, people came along and said “You’re not practicing Islam the way I understand it in my culture from my country,” so they went and formed their own mosque. We now know many people from that organization who have gone on to start their own organizations and mosques. For example, the International Development and Relief Foundation (IDRF)—they have served people all over the world, helping with refugees, disasters etc. I recently met women who learned the Qur’an from that time in Sunday school, and have continued to make huge contributions to academia as well as Islam in Canada. I’ve met people from the Dundas Street Mosque who have gone out to Kingston, places all over the country, and even the States, and started their own congregations. It really had an enormous impact.

I have two things that still stand out to me today from the Dundas Street Mosque that represent the values that I fight for every day. One is that the men, women and children interacted together in the mosque. They worked, played, learned, enjoyed and celebrated together in the shared space. Secondly, I learned that Malcolm X visited the Mosque in 1965. He was invited over by some members of the mosque with the CBC to have dinner, where he spoke about his life. Soon after, he went back to the States where he passed away under unfortunate circumstances. But I was always inspired by his passion for social justice. Two years ago I started an award in his name to recognize any youth, chaplain, or leader in our community who have made a tangible contribution towards social justice.

TT: Being involved in so many organizations and activities, you certainly have your finger on the pulse of your faith group in Ontario. What are you most excited about for the community today?

HA: The Muslim community, like any community, had their challenges in the early years of formation. Fighting for their economic space, dealing with culture shock etc. Initially I found that the Muslim community was concerned with things like how to find Halal meat. They had to go to farms and freeze the meat for months. Later on, that industry grew. So this is the way we are moving. Now you can go to a Halal restaurant, and have it served in even in pubs, steak houses and fast food places. So this is growing exponentially.

Calvin Klein and many other fashion designers are looking to ensure that they have scarves that can be seen as hijab friendly. Every day we are seeing positive things coming up. It’s like a pebble that is thrown on the water—the ripples will keep going and going. We can’t even imagine how far it will go. So we just need to keep watching.

TT: That’s encouraging to hear. There really is so much to look forward to. Thank you so much for taking the time to speak with me today, Habeeb.