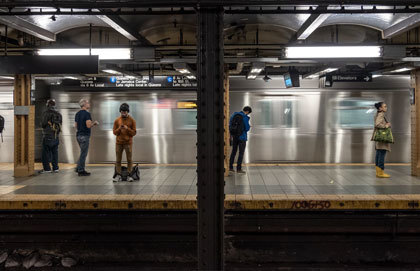 In the middle of a freezing February, in a week of flaming government scandal, in a tunnel of the Montreal Metro, I encountered a homeless man facing a conundrum of flowers.

He’s a regular at the bottom of the escalator leading to the Guy-Concordia green line stop. He doesn’t perform Bob Dylan songs badly on a tuneless guitar, or honk the bagpipes, toot the flugelhorn, strum the harp. He stands there smiling a half-smile as the Metro crowds push past his Tim Hortons cup, and his small cardboard sign, hand lettered, that reads: “Being kind is not a sign of weakness.”

He teased me about the length of time it took me to fish some coins out of the pocket of my ludicrous overstuffed Canada Goose knock-off winter coat, but as I made to move on, asked if he could ask me a question.

Clearly a natural diplomat on a critical mission, he graciously let my fat pitch slide. He said instead that something strange had happened to him earlier in the day, and he needed the wisdom of age to help him integrate it into the schema of his personality. Or words to that effect.

“I was standing here,” he said, “and this young woman walked by and handed me some beautiful flowers. I don’t know what to think about that, or what it means. What do you think I should do?”

“Well,” I said, without too much thought, “I wouldn’t think about it at all. Something good happened. I’d just take it.”

Where we get lost so easily, I think, is in forgetting that each detail has its self-contained measure of importance, yet no one detail matters outside of its connectiveness to all the other details.

His half-smile went full tilt. I was absolutely right. It was the best advice anyone had given him for a long time. He gave a middle-manager’s exasperated wave in the direction of the rim of his Tim Hortons cup.

“Sometimes in this job,” he said, “I get lost in the details.”

Don’t we all, I thought. Don’t we all? Not, by any means, that everything needs to be the big picture. Big pictures, after all, are made up of anywhere from two to a kabillion-plus small details. Where we get lost so easily, I think, is in forgetting that each detail has its self-contained measure of importance, yet no one detail matters outside of its connectiveness to all the other details. It’s the great weave called cause and effect.

In the case at hand, a man who literally had on hand a hand-written reminder about the nature of kindness, lost track of the detail of how to accept kindness from strangers, no doubt because it was such a rare requirement of his days. As for me, I was blind to the human capacity to bring the instinctive dignity of work – “this job” – in a man bearing daily witness in the Guy-Concordia Metro. He thanked me. I owed him gratitude as well. 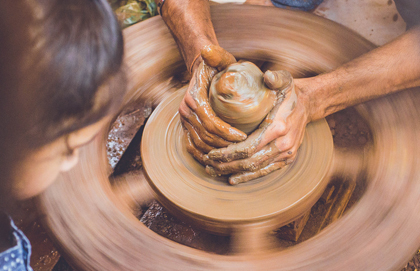 Increasingly, I’m coming to see such moments as relief from the myopic malevolence that afflicts so much of our large politics and our small engagements. Not exclusively of course. Far from it. There is obviously still the big picture to keep in our sights. It comprises everything from government scandal to surviving Canadian February. Attending to the stitches and the interstices, though, bring us learning, yes, but even more, refocuses us on that essential element of all things: hope.

In a New York Times column this week, David Brooks wrote compellingly – hauntingly – about a national movement that is a far more elaborate variation on this idea. It’s called Weave: The Social Fabric Project, which Brooks started in 2018 as a contribution to the social isolation he encounters everywhere he travels in the U.S. The core premise is that such isolation underlies a myriad of other problems besetting North America. The second belief is that local groups already busy addressing that isolation can be mobilized into a country-wide effort of like-minded citizens working independently to a common purpose.

“This is a movement that doesn’t know it’s a movement,” Brooks writes. “We’re living with the excesses of 60 years of hyperindividualism. There’s a lot of emphasis in our culture on personal freedom, self-interest, self-expression, the idea that life is an individual journey toward personal fulfillment. You do you.

"But Weavers share an ethos that puts relationship over self.  We are born into relationships, and the measure of our life is the quality of our relationships. We precedes me.”

Brooks is adamant that it is not just sociological repair work, though it is that and valuable because of it. It is, he stresses, moral work and must be seen, at least in good measure, through a moral lens.

“We all create a shared moral ecology through the daily decisions of our lives. When we stereotype, abuse, impugn motives and lie about each other, we’ve ripped the social fabric and encouraged more ugliness.

“When we love across boundaries, listen patiently, see deeply and make someone feel known, we’ve woven it and reinforced generosity. As Charles Péguy said, ‘The Revolution is moral or not at all.’”

Despite what my son long ago diagnosed as my “Burkean nutbar” misgivings about anything local becoming national or global (“made scalable” in the jargon of franchisers and homogenizers among us), I think the Weaver project is admirable and worthy of imitation on this side of the border. But there’s a complement I would suggest, one that arises from solving a mystery of my childhood.

Attending to the stitches and the interstices, though, bring us learning, yes, but even more, refocuses us on that essential element of all things: hope.

When I was a little kid, a family up the street from us experienced financial hardship, and the mom took in clothing to sew. She put a sign in her window that advertised “Invisible Mending.” Starting a lifelong trend, I walked around for days, bumping into things, mystified by how she made the mending “invisible.” What special powers did she have to make things invisible? What exactly was invisible after the mending?

I asked around but my best friends who lived across the alley, Davey and Bobby Whiteman, didn’t know, and my mom was putting up pickles or beets or something so the answer she gave me was too truncated to help at all. If King the Dog and Fluffy the Cat knew, they weren’t giving up their secrets. So, the years of a life went by.

Lo and behold, the answer came while I was on the Metro green line headed for the Guy-Concordia stop this week. A trinity of Indigenous people boarded the same car as I did. They comprised a couple who looked to be in their mid-30s, and tiny, elderly, toothless woman who stood at the edge of the half curve they created.

Watching them, I became aware of myself indulging in thinking that was neither harsh nor injurious toward them but was, shamefully, nevertheless based on presumptions I had no business presuming, and stereotypical judgements about things I am no one to judge. Then this happened: the man leaned over and gave the younger woman a soft kiss on the cheek. The tiny toothless woman said: “I keep forgetting you guys are married now. I’m so happy how happy you are.” And the woman who’d been kissed said to the older tiny toothless woman: “Back when we first met, you were still homeless. Remember?”

You were still homeless. Remember?

When I got out of that Metro car, I wanted to purge every hideous judging presumption, every dehumanizing stereotype, every vile lie of assumed knowing, every obstacle to crossing boundaries, from my heart and mind and soul. I went through the day wanting someone to please explain to me what had just happened, what I was supposed to think and do.

Slowly, though, it dawned on me that in passing, they’d given a beautiful gift not of flowers, but of the life-long elusive meaning of invisible mending. I knew I had to stop thinking about it, and just take it.

Weaving, as David Brooks describes it in his New York Times column, appeals as a wonderful and powerful action whose time is now, whose necessity is vital. But I think its companion is a process of constant invisible mending, of unseen interior repair, vis-à-vis how we as individual souls see, and listen to, and shape the world around us. How we create, that is, its moral ecology.

Weaving, by its nature, is an outward movement. Its job is combining and binding what is true and right and good, what makes “me” come after “we” in Brooks’ lovely phrase. The job of invisible mending, in parallel, might be the flip side. It might be to help us picture not just the outward world, but the tiniest stitching of our hearts with every detail of what we know is love.