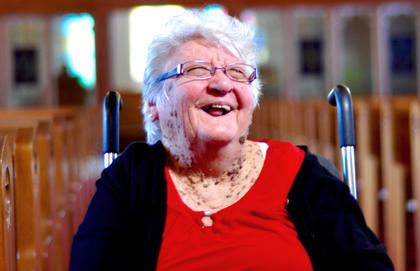 In a thousand stories, thousands remain untold. In any given context, this can be chalked up to simple mathematics. It is only in stepping back that one realizes: many of these stories will never be told. This silence goes beyond calculation to the heart of faith. Is there a God who hears those stories? Are we open to a God who has woven those stories into the tapestry of the world in all of their beautiful imperfection?

The writer of Proverbs presents a tantalizing paradox of justice: “Speak up for those who have no voice, for the justice of all who are dispossessed” (Proverbs 31:8, HCSB). How might it be possible to speak for those who have no voice? If we cannot hear the story, how might we tell it? Even if justice means that everyone has the right to have their story heard, can any one of us claim the right to speak on behalf of another?

I persist, not out of a sense of righteous indignation or political advocacy but with great fear and trembling. I proceed only trusting that the God whom we gesture toward in traces of stories, experiences, and actions also intends for the accounts of those created in God’s image to be told haltingly, slowly, and incompletely. And that in some way this, too, points us toward the Divine.

I speak here of Jonathan, a young man around my age who loves rides on pontoon boats, eating pudding, and relaxing outside on a sunny day. Jonathan has taught me more than most pastors or priests about the patience of God. As I clumsily learn to feed him, as I hesitatingly lower him from his wheelchair into the water, and as I ineptly attempt to understand his eye movements or the sounds that come from his mouth, Jonathan waits. He does not appear angry or upset, though he has every right to be. There were even a couple of times during our week together when a smile broke through his face, his eyes glimmering with joy. Despite my fumbling attempts, these were moments of grace in which I heard the words “well done.” It was all I needed. It was everything.

I speak here of Anna. Anna participates in her local faith congregation three or four times a week, along with other friends who have intellectual or developmental disabilities. They act out skits based on Biblical stories, they sing, and they enjoy rich communion around the snack table. Anna’s dedication to her faith not only challenges and changes me, but it also shapes the faith community in which she has found belonging. In turn, that faith community is shaping Canada.

Anna’s story is often left untold. We talked at length, and recorded a video interview. Even as our time together drew to a close, I felt I had missed so much of what she was trying to express. Still, I was unable to shake the picture of her from my mind. I’m not sure I can say more than is communicated through her smile. The Divine truly “plays in ten thousand places, lovely in limbs, and lovely in eyes not his” (Gerard Manley Hopkins).

We must resist the temptation to deify or demonize that which we cannot comprehend. Jonathan and Anna are not saints unless we all are. Each expresses a unique and vital story that weaves its way through the fabric of our society. More importantly, perhaps, each expresses the image of the Divine in the pages of God’s sustaining story.

We seldom slow down long enough to hear the stories that remain unspoken, yet it is through these stories that we gain a new perspective on our own and we learn to tell our stories in a new way. Faith in Canada would be an impoverished faith if it were not for these untold stories, just as Canada would be an impoverished nation if not for its story of faith. Perhaps in opening ourselves to the stories that resist an easy-telling, we will come to a deeper appreciation for our own story, the story of our country, and the story of the world in which we live.