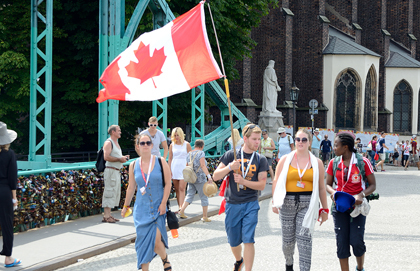 It’s been 15 years this week since a saint came marching on to Canadian soil. On July 23, 2002, then Pope John Paul II arrived in Toronto for World Youth Day celebrations. International gatherings held every 2-3 years, World Youth Days were the creation of the late pontiff and would become a sort of Catholicstock, with hundreds of thousands of young people on a spiritual high gathering to celebrate a common faith across the continents and to prove to a city that yes, people can sing on the subway and make the morning commute a joyful experience.

Less than a year after the September 11th terrorist attacks and with the pope in declining health, there was speculation the event might be cancelled or that the pope wouldn’t be able to come. When final confirmation did take place, the expectations were clear that the Holy Father might not be able to attend all World Youth Day events, he would likely need assistance throughout his stay and that the media should not expect the traditional walk down the steps of the plane on his arrival.

For those of us who grew up with Pope John Paul II, we had seen the slow decline of the Holy Father, yet it didn’t impact his ambitious schedule or appearances. He very publicly showed the world how to live and also how to die by living his sickness, not behind closed doors but for all the world to see.

You could say I was a top-tier member of the papal fan club. I was seven years old when he became pope – at that age, you figure he’d been in the job for years. One of the highlights of my life was the opportunity to meet him on my birthday in Rome, April 5, 2001, when I was part of the Canadian delegation receiving the World Youth Day Cross, the Olympic Flame of World Youth Day.

I also recall, as a 13 year old, attending the Papal Mass during his first visit to Canada in 1984. It was a soggy affair but I’ll never forget the hordes of people rushing the barriers as the Popemobile went by. In 2000, I traveled to World Youth Day in Rome, where two million gathered to celebrate the final Mass. At the opening ceremonies, I remember all too well standing on a garbage can just outside the pillars of St. Peter’s Square where only a small crowd of a million had gathered for the opening ceremonies. You couldn’t see a thing, it was all in Italian and the heat was sweltering. But if I twisted my neck to an awkward angle, stood on my tip toes, the guy in front of me with the German flag moved to the right, and the wind was blowing at just the right time, I could see a screen with the Pope’s face on it! It was like I’d won the lottery.

So when he arrived in Canada for World Youth Days in 2002, I found myself in a television studio providing commentary on the papal visit. Again, we warned viewers to expect our first glimpse of the Holy Father to be coming from behind the plane at ground level. And then we saw him. At the top of the plane moving slowly but deliberately. Waving off the lift that had been prepared for him, he started walking down the steps. We all braced ourselves, praying he wouldn’t stumble or fall. The wind caught his zucchetto (skull cap) and off it went. Aides stood close by assisting the Holy Father. The avid skier, the outdoorsman – now a witness of frailty, determination, and faith unfiltered.

Some might say the future saint wasn’t marching down those steps. Yet to me, those simple steps on Canadian soil transmitted a message of dignity, hope and love for all of us. They were a message of the value of every individual, no matter their ability, sickness or predicament. This simple gesture reminded us that everyone should be loved, no one should be left behind. So to me, yes, that was the greatest march I’ve ever seen.

At World Youth Day 2000 in Rome, Pope John Paul II challenged us to be the saints of the new millennium. By 2002, he was a saint in waiting and at his funeral in 2005, he was already a saint in the eyes of the faithful as they chanted Santo Subito (Sainthood Now!) as millions gathered to say one final goodbye. The church formally canonized Saint John Paul II on April 27, 2014.

In the words of the late Saint John Paul II at his homily during the final Mass of World Youth Day 2002 in Toronto:

“You are young, and the Pope is old, 82 or 83 years of life is not the same as 22 or 23. But the Pope still fully identifies with your hopes and aspirations. Although I have lived through much darkness, under harsh totalitarian regimes, I have seen enough evidence to be unshakably convinced that no difficulty, no fear is so great that it can completely suffocate the hope that springs eternal in the hearts of the young. You are our hope, the young are our hope.”

On July 23, 2002, the saint came marching into Canada. We pray that many more saints are following in his footsteps, inspiring others through their example and witness.

Oh how I want to be in that number, when the saints go marching in!