For example, what exactly is a kilogram? No, you may not answer a thousand grams. Or a million milligrams. That just invites the same question about a gram or a milligram. And those clever voices from New York and London saying that one kilogram is 2.2 lbs. are not clever, as kilograms measure mass, while pounds measure weight. And in any case, what is a pound?

All measurements require a standard – a precise and enduring standard. And it has to be external or objective, not relative to the measurement unit itself, as a kilogram is to a gram. You will be pleased to know that there is such an objective kilogram.

“The standard kilogram has been the mass of a lump of metal sitting nestled under a series of bell jars, in a vault in a suburb of Paris,” the May 18 issue of The Economist reports. Just pop over to Paris and you can test out your weighing scale for truth and accuracy. More or less. The maddening thing about that lump of metal is that very minor fluctuations in radioactivity mean that the lump changes in mass. Very slightly, imperceptibly so, but it does change. A thousand years from now that lump might have lost a few micrograms (1/1000th of a milligram). Unacceptable!

“At the moment, the kilogram is defined in terms of the mass of a particular thing,” says Ian Robinson of the National Physical Laboratory in London. “And if that thing is destroyed or changed or whatever, it’s awkward.”

But that awkward and vexing problem – keeping greengrocers and goldsmiths up at night – is no more. Send that Parisian lump of metal to the scrap yard. It’s defunct. Obsolete.

The kilogram is no longer a lump of metal. No, the kilogram is now fixed forever. As of May 20 last, it is now defined by Planck’s Constant, which relates a radio wave’s energy to its frequency. If you want more than that – and do you really? – I am not your man.

The kilogram has thus caught up with the metre, which is already related, as the kilogram now is, to a constant in nature, not a prototypical thing kept in Paris. 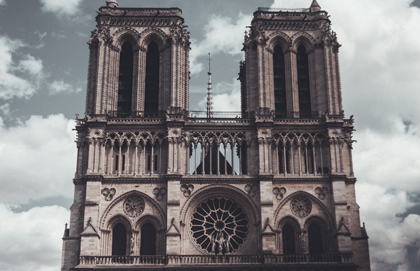 So, as any high school physics student will tell you, the metre is defined by the speed of light in a vacuum, approximately 300 km/second. So, you figure out how far light travels in one second in a vacuum, and divide the distance by a constant 299,792,458 and, just like that, the metre emerges in all its precise, enduring and objective glory.

This is of interest far beyond greengrocers and goldsmiths.

A curious mind might ask why there are constants in nature at all. A world of unremitting randomness would not be expected to have fixed constants that prove objective and enduring. Randomness does not give rise to reliability, and yet the world around us is full of reliable things.

But my interest is not physics. It’s the spiritual application of standard and measurements. How does one measure a good life? We immediately look for the standards by which any measurement might be taken. What is the standard for the good life? Mentors, guides, heroes, saints – these are our standards, and why any healthy culture produces a literature that proposes those good standards. The great Ignatius of Loyola, a military man, discovered a new mission by reading the lives of the saints. It’s why mothers read Bible stories to their children long before they are capable of any theological reflection.

Our culture and politics is struggling with, as Joe Biden puts, changing standards. What was commonly measured as acceptable behaviour – racist jokes, wandering hands – is no longer. The old standard was flawed. But just because standards change does not mean that they change for the better. A prevailing secular standard finds that religious people no longer, as it were, measure up.

St. Paul was telling the Philippians about standards of measurement when he wrote that “whatever gain I had, I counted as loss for the sake of Christ. Indeed, I count everything as loss because of the surpassing worth of knowing Christ Jesus my Lord. For his sake I have suffered the loss of all things, and count them as refuse, in order that I may gain Christ” (Phil 3:7-8). Use the wrong standard and you might count “refuse” – one translation renders it “dung” – as a good; use the right standard, and dung remains dung, and Christ is revealed as the true gain.

On of my favourite writers, Blessed John Henry Newman, made it more explicit in a homily preached during his Anglican days, entitled “The Cross of Christ, The Measure of the World”:

… the death of the Eternal Word of God made flesh [is] our great lesson how to think and how to speak of this world. His Cross has put its due value upon every thing which we see, upon all fortunes, all advantages, all ranks, all dignities, all pleasures; upon the lust of the flesh, and the lust of the eyes, and the pride of life (…) It has given a meaning to the various, shifting course, the trials, the temptations, the sufferings, of his earthly state. It has brought together and made consistent all that seemed discordant and aimless. It has taught us how to live, how to use this world, what to expect, what to desire, what to hope. It is the tone into which all the strains of this world’s music are ultimately to be resolved.

Thus in the Cross, and Him who hung upon it, all things meet; all things subserve it, all things need it. It is their centre and their interpretation. For He was lifted up upon it, that He might draw all men and all things unto Him.

The metre, until 1960, was like the kilogram a few days ago. There was a platinum rod in Paris that was the prototypical metre. But important things are not measured by platinum, which is hardly precious enough. For important things there is already a standard measuring rod. Made out of wood.

By Virtue of Being Tiger

More than winning another Major championship, Father Raymond de Souza writes, Tiger Woods needs to gain the reward of being redeemed as a truly virtuous man.