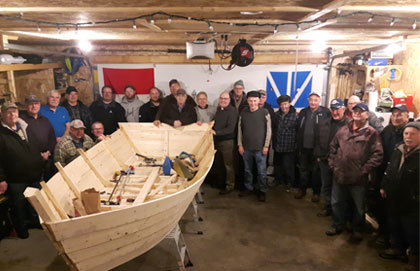 As a newly ordained priest in my first parish, I spent most of the first year listening and observing.  One morning while facing the congregation I wondered “where are the men?”  The community had a population of approximately 1,000 people and it was estimated that at 60 per cent had an Anglican background.   Average Sunday attendance would be less than 35 persons, the great majority of whom were female.   While some were widows and there were a few men, there is an obvious disconnect in the number of men attending worship.   Where were the men, and why did they not come to church?

This prompted me to do some discrete and subtle questioning and a lot of active listening to discover why the men did not attend worship. There were many conversations on the road, at the local grocery store or on the wharf.  To find the answers to my questions, I needed to go to where the people were.

I discovered there were many reasons, maybe some excuses, for the men not coming to church.  Many had worked on the great lake and coastal boats or out of the province for much of their working life.  Many had gotten away from going to church.   Some had large families. While the wife would take the children to church, the husband stayed home and cooked dinner. 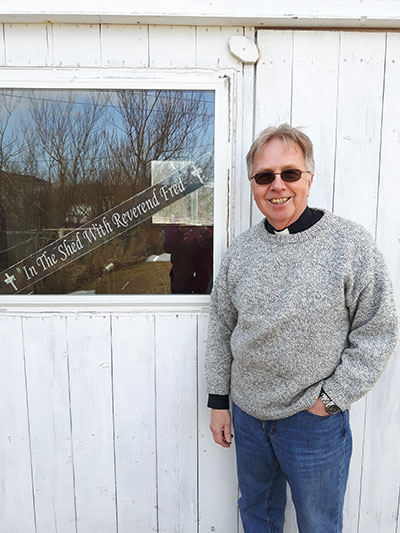 Rev. Marshall in front of the shed

Many people in Arnold’s Cove are from other communities located on the many islands of Placentia Bay.  While families resettled to Arnold’s Cove in the 1950s and ’60s, they still hold on to the life they once had.  Many of them, when they have time off work or retire, spend a significant amount of time “up the bay.”  The social life of these people, while living in Arnold’s Cove, is still closely connected to the place where they came from.

While they integrated into a new town, their social connections are still, for the most part, with the people from the communities from where they came.  Many of the women became members of the Saint Michael and all Angels ACW  but  I am not aware that the men had a similar connection to the church.  I had travelled extensively in my former secular life and I know from personal experience that if you have been away from any organization, be it the Lions Club or the Church for any amount of time, it is very hard to walk back in the door. 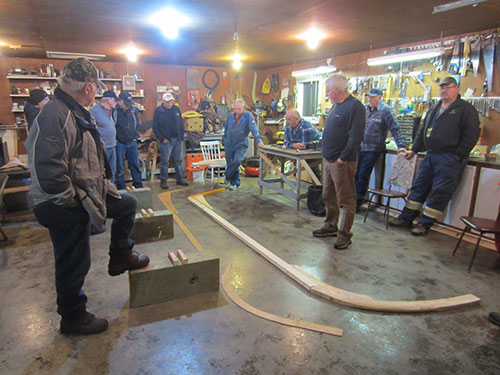 One of the things I discovered is that a common interest and a place to go for men, especially in rural areas, is “the shed.”   Entering the shed is informal and much less intimidating than entering the Lion’s Den or the church.  It seems that “in the shed” everyone is equal.  In the shed you can engage in conversation or just sit and listen.  When the decision was made to have a place for men to gather, men showed up to help prepare a shed behind the rectory and next to the church.  Installing a wood stove was the largest task.

As I wondered what to call this new found ministry a friend jokingly suggested “In the Shed with Rev. Fred.” At first I was not too keen on the phrase however, I knew it had to be simple and inviting – so “In the Shed with Rev. Fred” it became.  Men whom I had never or rarely seen in church came to help and came to take part in discussions such as “Small answers to big questions.”  In the shed, men would ask questions or talk about topics they would not have had an opportunity to discuss in church.  The shed was very casual and there were no intimidations. 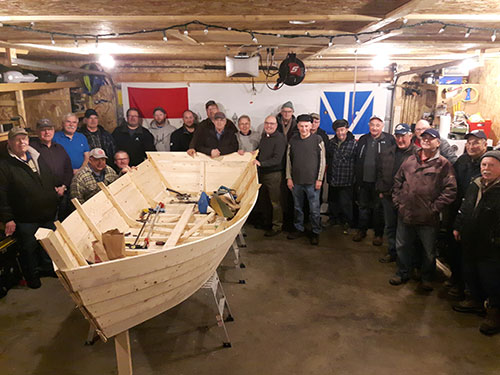 The first year we promoted the shed to Anglican men.  While the intention was simply to get the men who belonged to the congregation, I realize now this was a mistake.  Following the first year in the shed everyone was welcome.  It is interesting that in the few years we met behind the rectory, there were mostly Anglican men.  When we moved to a shed away from church property there were a lot more men from every denomination in the community.

Other than the first couple of years when we had topics which did have a religious theme, as we moved to building the boat, there was no “church” talk. However, it was well known that this was a church activity.  It seemed to be naturally understood that we would not meet during Holy Week and unless there was a slip of the tongue there was no profanity and no off-color jokes.

“In the Shed with Rev. Fred” on Thursday evenings has evolved into something I could have never imagined and I am still not sure I have fully grasped what this has meant to the community.   I am not sure the men themselves have realized what has occurred.  I am told that “In the Shed” has brought together brothers, neighbors and members of the community in amazing ways.   The effect is not only from what happens in the shed but in the thousands of people who follow this on social media. 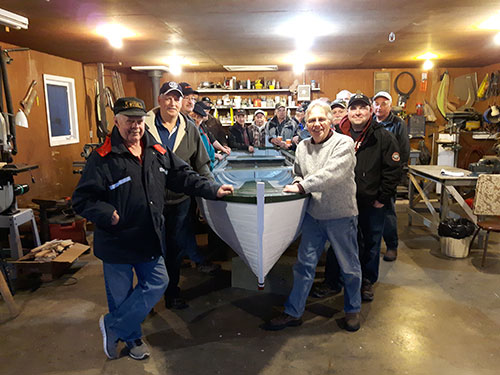 While some may follow what we do on social media due to an interest in boats, others are interested to follow the journey of their family members.  The title “In the Shed with Rev. Fred” also became “Building a Boat – Building Community.” I should point out that the boat is only the vehicle.  I am sure in other areas building anything with a local connection or tradition would be of equal interest.

Recently someone asked me whose idea was it to build a boat and I said it was mine. I thought about my response that night and I contacted that person the next day to tell them that I believe I am falsely taking credit.  When we look back and reflect on our thoughts, as random as they may be at times or in what seems to be a chance encounter, we may be getting a glimpse into where God is working and find our call to participate in God’s work.

In reflecting, I expect that four years ago when I looked at the congregation from the altar one Sunday morning God said: “Go find the men.” As I looked around and listened to the people, God may have said: “You will find them in a shed.”  Through an encounter with a fellow clergy, I believe God led me to an International Wooden Boat Building Seminar at the Marine Institute in St. John’s and then said: “Build a boat and you will find more men.”

God also said “You will need a bigger shed …”

If you wish to check out the amazing gatherings “In the Shed with Rev. Fred – Building a Boat – Building Community” visit our parish Facebook site - https://www.facebook.com/parishofthelivingwater/ I pray you will “Like” us and spread the Word.