Early in 2008 when Judy Csillag, a personal friend and long time interfaith advocate asked me if I would like to participate in a Women of Faith build for Habitat for Humanity, I said yes with no idea of what this would entail. Little did I know that this would turn out to be one of the most meaningful and unusual experiences of my life. 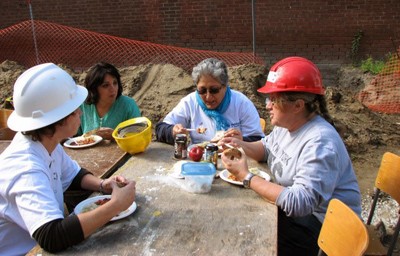 Since I came to Canada twenty eight years ago, there has always been an urge to give back to this wonderful country that is my adopted land and that has given me and my family a roof over our heads, jobs, security and most of all freedom. I realize that many people don't have these luxuries in their native lands or take them for granted in Canada. So I volunteer wherever I can but the Habitat experience takes volunteering to a whole new level. Habitat has a vision for a world where everyone has a safe and decent place to live. Their mission is to mobilize volunteers and community partners in building affordable housing and promoting homeownership as a means to breaking the cycle of poverty. To uphold the dignity of every human being, Habitat works with partnerships and a belief of faith in action.

The co-chairs of this initiative Rabbi Lori Cohen, Reverend Cathy Gibbs and Tanya Khan believe that building bridges between communities and societies that celebrates diversity, difference, and inclusion. It's no wonder that with Habitat, they came up with the idea of a Women of Faith build. It was a smooth, well planned and well executed project. Thirty women from six faith communities were invited to participate and we met at the Bishop Strachan School for our mandatory training session. But it was not just training. The energy was amazing and all the women who were there came with a passion for building bridges - not only cement ones but those of the heart and mind. This is when my own interfaith work was truly validated. We were given instructions, directions, enthusiasm, inspiration and a little pink hammer pin! We were women from Sikh, Muslim, Christian, Jewish, Hindu and Aboriginal traditions who shared our vision to come together to build homes for those in need.

Bright and early on October 16, 2008, I got up feeling like this was going to be a special day. Special it was because it started out with clouds in the sky and then I guess prayers went up from at least six faith traditions and the heavens opened up to smile with the sun. The location for our build was on Kingston Road and we got there sharp on time. At the site we were welcomed by a real crew, members from Habitat for Humanity Toronto, our co-chairs, some media and coffee. We got our instructions, a T-shirt saying Women of Faith Build 2008, hard hats with our names on them, steel toed boots and gloves. I've never worn a hardhat and boots so I clunked around feeling like I was going to fall (for some of the more petite women, sizes were a challenge because the shoes belonged to the male workers but they made it work by wearing double socks and sometimes mismatched shoes like moi). We were divided in groups of 5 with a leader who from the core building team. We started by standing in a circle while Valerie John from Toronto Council Fire Native Cultural Centre began the day with a smudge ceremony and a universal prayer for peace and off we went. The spirit and enthusiasm was infectious.

At the site, there were five half finished apartments and our mission was to build the back walls. "Yikes" I thought "I've never built anything let alone held a real hammer", but like the others, I was raring to go. We were told we have two coffee breaks and lunch (more than some women get at work!) so off we went following our leaders. The site is quite hazardous if one is not careful because there are beams, wood, equipment all over the place. Mike our group leader was an older experienced worker and he patiently guided us. Our project was carry heavy drywall to the room, measure, cut and paste a plastic vapour barrier over the basic wall and put dirty black glue on it. (Dirty, because if it gets on anything, you can't get it off. I was glad I wore a black sweat shirt.) On top of that we had to put drywall and drill it in with nails. Sounds easy but cutting drywall to fit around corners is a challenge. I thought using a drill would be a cinch - not! It takes a steady hand and lots of pressure. If Mike has not guided us, we would have made serious mistakes. I developed a whole new respect for the men who do this work daily. 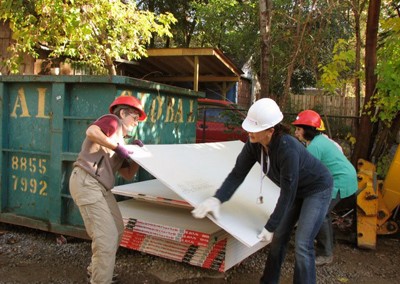 Now being women, there was a lot of chitter-chatter and we would wander off to see what was happening at the next lot. Some were younger and faster than others. There was a lot of sharing and compassion i.e. when I could not carry heavy stuff, others pitched in. We shared, cared, laughed, worked, exchanged recipes, spoke of our kids and took a break when we were exhausted. But it was one of the most inspiring moments in my life when the first wall was completed. Our communal cry of "Oyeh" was heard all over Kingston Road. People walking by stopped to see this motley crew of women working so hard for a common cause for humanity. It was amusing to see the new fashion statement by women in hijab wearing a hard hat - it was much more comfortable than ours because the hijab acted as a lining. My hard hat kept falling off but one woman told me to wear it backwards and it worked.

At breaks we exchanged notes. A warm vegetarian lunch was provided by Grace Church-on-the-Hill. I went to grab a coffee at the corner coffee shop and the owners were totally impressed by the work we were doing. In our group were three young (17 years old) students from CHAT - Community Hebrew Academy of Toronto. Mira, Danielle and Shira said "it's an awesome experience to meet all these women". For most of the women, the cause was inspiring because we had done some fund raising to get here, but more importantly it was the interaction with diverse women that made their day so meaningful. Helen Warner, Public Affairs Director for Church of Latter Day Saints said "I find we have so much more in common than what separates us. Along with homes, we are building relationships."

Naheed Khokhar from the Ahmaddiya Muslim community felt elated at what she called "a brilliant experience" while Valerie John from The Aboriginal Council Fire expressed "this is the first time I'm doing something like this. It's so poignant because it affects a real family so our work will live with them for as long as they reside in this house - it's a generational thing." 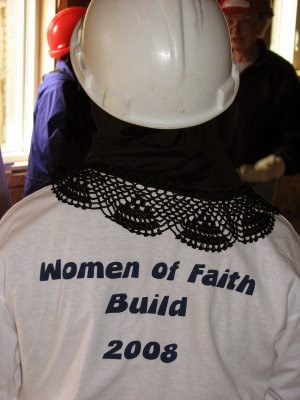 Barbara Wilson, family outreach coordinator for Habitat informed me that most of the work at Habitat for Humanity is volunteer and 60% of volunteers are women. Sally Wasserman, an energetic eighty something Holocaust survivor, said "it's absolutely wonderful to be part of a community build. If I can contribute even one nail it's worthwhile specially meeting all these wonderful women who I would not have met otherwise". I noted emails and cards being exchanged, women giving each high fives and hugs. Gurwinder Gill, Director Diversity Services for William Osler Health Centre this was an experience of cultural diversity where women crossed all boundaries of faith and culture putting aside biases in working together for a cause that touched all of them. "It makes me optimistic that if there is a will, we can move towards peace."

RAHEEL RAZA is President of the Council for Muslims Facing Tomorrow, http://muslimsfacingtomorrow.com

Is it possible to find peace and calm in a world of chaos and confusion? The idea of being a peacemaker is difficult, but also a relief.

The story of St. Maximilian Kolbe, a priest who gave his life for another prisoner in Auschwitz, inspires us to integrate faith and action, writes contributor Michael Gonari.