Timothy Eaton is known from coast to coast in Canada for revolutionary merchandising and for building a retail empire by supplying the needs of city dwellers and country folk alike. Despite his fame, Eaton preferred to remain largely in the background; he never became a public figure, and he refused to enter politics. He had three principal interests: his church, his family, and his store.

To have the sermon on the Mount brought out in his daily life.

Eaton was born in Clogher, Ireland, in 1834. His parents were devout Presbyterians esteemed by their neighbours for their Christian character and ready generosity. Eaton’s father was a farmer who named two of his sons, James and John, after his first and second favourite books of the Bible, respectively. He died before his last son was born, but his wife continued the tradition, naming Timothy after her husband’s third favourite book of the Bible. She also ensured that her sons were familiar with the Presbyterian catechism through daily Bible readings.

Eaton left school at the age eighteen and was apprenticed to a dry goods merchant. He slept under the store’s counter—convenient for someone who had to work from early morning to late at night six days a week. During his apprenticeship, he learned much about the business of buying and selling and that the honesty taught him by his mother was the best policy for a merchant. In addition, he learned empathy for all who worked long hours for little reward. When his apprenticeship expired, he received only one hundred pounds sterling for five years’ work.

Eaton immigrated to Upper Canada in 1857 to join his brother James, who had started a store in St. Mary’s, near Stratford, Ontario. He remained there until 1868. During an open-air meeting, he heard a Methodist minister preaching the Gospel. When an opportunity was given for corporate prayer, Eaton withdrew to a barn to “debate with [himself] and seek the assistance of God in solitary prayer.” On his return to the meeting, he made a confession of faith and soon joined the Methodist Church. 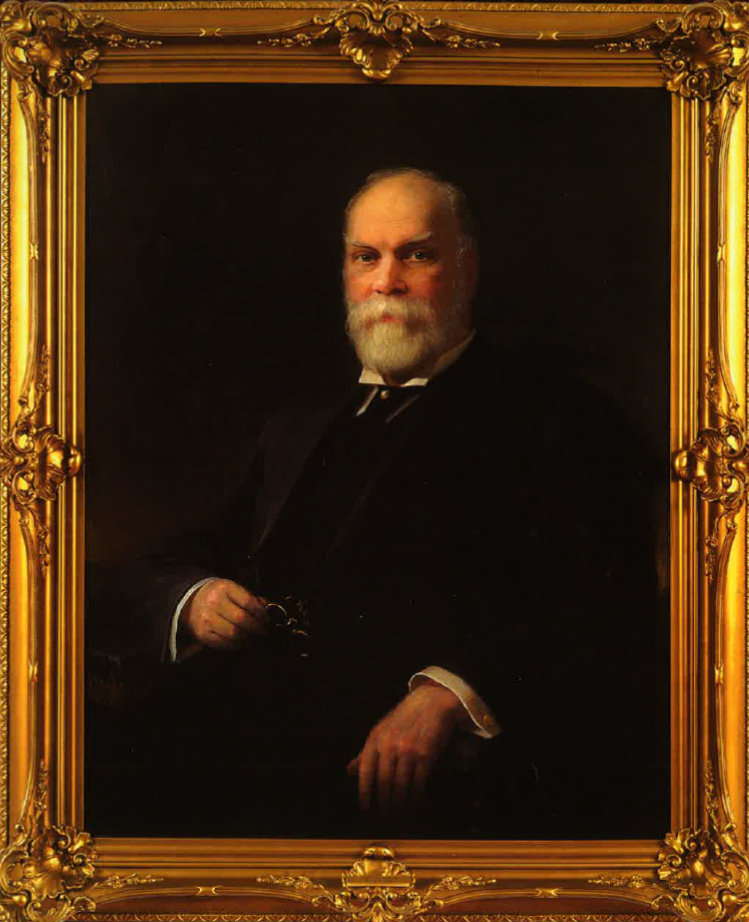 In 1861, Eaton met Margaret Beattie while attending St. Mary’s Methodist Church. Within weeks, he had proposed, and the couple was soon married. In 1869, they and their three children moved to Toronto, where they purchased a dry goods business on the corner of Queen and Yonge Streets for $6,500. Thus was born the T. Eaton Co. of Toronto, launching a revolution in Canadian retailing.

Eaton’s first newspaper advertisement shocked the competition. While other merchants perpetuated the long-standing practice of negotiable prices and the costly practice of extending credit to customers, Eaton had a better idea. He announced that his goods would be sold at one unalterable and fair price and that everything would be sold for cash. His timing was right. Shoppers were tired of never knowing the true price of anything they bought. Eaton’s subsequent slogan, “Goods satisfactory or money refunded,” would further rattle his competitors.

Eaton was revered for his inflexible integrity. He mandated that in all advertisements “the exact truth should be told with regard to the goods offered for sale.” He decreed that if a customer was not satisfied, the price should be refunded. And he remained an unwavering Methodist who never sold tobacco, liquor, or playing cards in his store and did not allow them in his home.

Eaton’s greatest initiative was the catalogue, first introduced in 1884. In such a vast country, where the rural populations was spread out over enormous expanses and had no access to modern products, the catalogue soon became the way to shop. By the early 1900s, the Eaton’s catalogue was an integral part of the culture. Settlers in the west relied so heavily upon it that they dubbed it the Prairie Bible. It was used not only to shop, but also to learn English. The catalogue’s other uses—including hockey shin pads, building insulation, and outhouse toilet paper—are legendary.

During his career, Eaton never forgot the principals that had guided him since his youth. The passing years merely reinforced his reputation for fair dealing. He often urged his sales staff to “use no deception in the smallest degree—nothing you cannot defend before God or Man.” And he always remembered the long hours of his apprenticeship in Ireland and decided that none of his staff would experience a similar fate. He led the country in introducing shorter working hours and paid welfare and pensions before most employers had even heard the terms. At a time when most Toronto stores remained open until 10:00 p.m., Eaton ran advertisements suggesting to his customers that they shop during the day to “Liberate Your Fellow-Beings.”

Eaton’s business boomed, and he moved into constantly larger buildings. By the 1880s, he was among Toronto’s leading merchants. He demonstrated his largesse in 1889 as one of the chief founders of Trinity Methodist Church. The Methodist churches on Bloor Street and Robert Street were also built through Eaton’s generosity, and he was an important benefactor to the denominations Victoria College, endowing a chair in English Bible.

Eaton’s only recreation was his horses; he kept a stable of ten fine carriage horses. When, late in life, he was thrown from his carriage and broke his hip, he refused to let his confinement to a wheelchair restrict his life.

Toward the century’s end, however, Eaton’s aggressive sales and advertising methods began angering smaller merchants. He endured protests, rallies, and political pressure for years. Problems notwithstanding, by the time he died of pneumonia in 1907, Timothy Eaton’s retail empire had burgeoned to encompass nine thousand employees, or associates, as he preferred to call them.

At the funeral service in Eaton’s home, the Reverend Joseph Odery mourned the loss of “one of the best friends I ever had,” a man who in matters of faith had the “beautiful simplicity of a child” and who endeavoured “to have the Sermon on the Mount wrought out in his daily life.” Dr. Nathanael Burwash, the chancellor of Victoria College, further eulogized Eaton, saying that the “old-fashioned fear of God and faith in Divine Providence was deep-rooted within him.”

In 1909, Eaton’s wife learned that the Methodists were trying to raise money to build the first great Methodist church in the northern section of Toronto. She offered to donate all the money they needed to build one of the handsomest churches in the city and made only one request: that they church be named after her husband. The Timothy Eaton Memorial Church, on Toronto’s St. Clair Avenue, was completed in 1914. It testifies to Eaton’s steadfast faith.

Joy I. Santink, Timothy Eaton and the Rise of His Department Store (Toronto: University of Toronto Press, 1990)

Michael Clarke edited, published and wrote several of the entries in Canada: Portraits of Faith in the 1990s, during the time he was a history teacher in British Columbia’s Fraser Valley. Subsequently, he has served several Canadian and American faith-based institutions as a public policy consultant. His research interests include popular culture, bioethics, politics and history.

From Fatherhood to Priesthood

Fr. Robert Assaly is the first married Catholic priest in the Montreal archdiocese, ordained this past September. Publisher Peter Stockland sits down with Fr. Assaly to discuss this calling from fatherhood to priesthood.

Faith Among the Seconds

Through often painful moments listening to a broken man at an Ottawa drop-in centre, Joyce Deng began to hear God’s voice in the briefest of encounters.