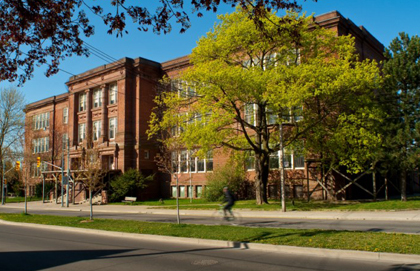 The Art of Conversation March 3, 2016  |  By Stephanie Schoenhoff

It’s not easy to get people to open up about intimate questions of the soul, especially in public. For most people, discussions on identity, faith and purpose happen behind closed doors.

Sometimes, however, there can be a place for these deliberations to happen in community. Those involved with The Koffler Centre of the Arts in Toronto would agree, particularly when the topic concerns most of us—and the big questions of life do affect us all.

The Koffler Centre is a Jewish cultural organization that offers a contemporary cross-disciplinary arts program fostering inquiry and exploration.

Director of Public Programs and Engagement Jessica Dargo Caplan explains how Koffler promotes inter-cultural dialogue that engages their Jewish identity with a plurality of voices.

“It started with the Koffler Gallery which was part of the Jewish Community Centre at Bathurst and Sheppard, as a way to develop arts education and gallery programs,” says Dargo Caplan.

Their programs use “contemporary art as a way to explore a very broad range of what a Jewish identity is,” and go beyond that too.

“We’re not just showcasing Jewish artists, or Jewish content necessarily… public engagement is core to what we’re doing,” she says.

Mona Filip, Director and Curator of Koffler Gallery, curates four art installations per year. From Mixed Fit, which uses screen-printed t-shirts to explore notions of displacement between cultures, to their most recent installation Faith, which uses film to examine the three dominant religions in Jerusalem, the exhibitions explore a broad range of topics in a wide variety of media.

Faith is an installation by British-Spanish artist filmmaker Isabel Rocamora, whose work appeared in the Koffler Gallery from September-November 2015 as part of the exhibition Troubled Histories, Ecstatic Solitudes. In this piece, Rocamora uses three screens to display video footage of the act of worship of three men—one Greek Orthodox Christian, one Sunni Muslim and one Orthodox Jew. The exhibit’s online page says it best: “Questioning segregation while celebrating difference, Faith invites reflection on one of the most tragic, world resonating conflicts that persist in this new century.”

The exhibit highlights the similarities between the three devout men, despite their cultural differences. “Rocamora suggests that faith may not only cross the horizon line between the earth and the beyond, but the borders that divide our horizontal planes,” says Mark Cauchi, Assistant Professor at York University in an essay he wrote for the gallery.

It’s exhibits like Faith, and the discussions they generate, that make Koffler so important. Koffler recognizes that the issues facing the Jewish community are likely to parallel those of other cultural groups—and that’s what makes their dialogue so vibrant.

If you’re willing to wrestle with questions about heritage, place and personhood, Koffler’s doors are open and you’ll be sure to find a lively conversation inside.