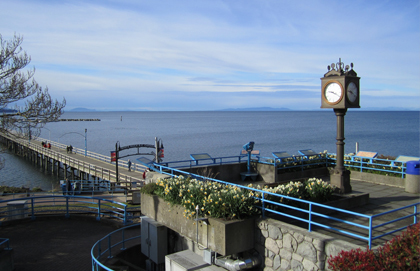 The role of churches and other faith-based ministries in the social, economic, governance and health of Surrey and White Rock, British Columbia, is the focus of a now-launched book co-authored by several long-time observers of life in the two cities.

The Church in Surrey and White Rock: The Untold Story (212 pages) includes historical and descriptive chapters on the Surrey and White Rock faith life. It touches on the communities’ hundreds of Christian churches and other ministry clusters. As well, there is a comprehensive directory of such churches and ministries, complete with addresses, phone numbers and internet linkages.

The two cities, with a combined population approaching 600,000 are rapidly growing urban centres in what is locally-dubbed as the “south of Fraser” sector of Greater Vancouver, so named because they are located south of the iconic Fraser River, which empties into the Salish Sea south of Vancouver city itself.

For Convivium readers in the Surrey and White Rock area, a book-signing involving several of the chapter authors and one of the historic subject people, former BC premier Bill Vander Zalm, is set for Friday, August 17 at 6 pm. The event will take place at Black Bond Books in Central City Shopping Centre, located near the Surrey Central SkyTrain station and Simon Fraser University Surrey, in the city’s emerging downtown core.

A previous book launch took place Saturday, June 16 at Regent Christian Academy. It attracted, among several other leaders, two senior provincial politicians who represent Surrey ridings. The two were Bruce Ralston, jobs minister in the current BC NDP government and Marvin Hunt, who served in the previous BC Liberal government as parliamentary secretary for community and sports development. In the spirit of relatively friendly non-partisanship portrayed in the book, the two men maintained a congenial demeanor in front of the almost 100 launch attenders.

Other faiths have not been left out of the book’s contents. While it is the story of various streams of the Christian community in Surrey and White Rock, it includes information about other faith groups, to ensure context for its coverage.

The book is somewhat patterned after one of a similar title published further up the Fraser Valley in 2013 and entitled Being the Church in Abbotsford. John H. Redekop, who comes originally from the valley but spent much of his career as chair of the Wilfrid Laurier University political science department in Waterloo, Ontario, is a major spearhead behind the project.

Redekop has recruited an impressive stable of writers for the various chapters – all of whom have had significant connections with faith-life activities in Surrey and White Rock. They include such as:

Redekop, Bramble and Mackey are the by-lined editors for the project.

The back cover of the book carries a generously-worded endorsement of both the project and several sectors in the Christian faith community, from Dianne Watts, who was Surrey’s mayor and community development catalyst for nine years in the early 2000s.

While Cardus and its thinking about “social architecture” in North American cities was not officially part of the project, the book’s editors recognized the Christian think tank’s research and analysis as valid in understanding the role of churches and Christian ministries in the larger context of the two cities.

The book begins with an assessment by Joanne Pepper of the biblical view of cities and the role in which people of faith in the Bible played in their cities.

Bucholtz and Mackey co-authored two chapters that highlighted historical events and developments involving churches and Christian ministries dating back to the 1800s. One of those chapters includes a synthesis of a recently report by leaders in the communities’ 15 largest churches about church involvement in community and social service, produced for current Surrey mayor, Linda Hepner.

MaryAnne Connor, director of NightShift, a ministry in the “strip,” a now-eliminated homeless tent city in the historic community of Whalley, writes a chapter about Christian ministries “helping the needy.”

Ross Johnston has a chapter on seniors’ ministries, while Jack Taylor focuses on faith-based services to refugees and immigrants.

Health care from a Christian perspective is covered by Perrie Peverall and John Redekop, followed by an assessment of several different Christian and other faith-based school systems, by Beverley Johnston.

“Pursuing a higher standard” is the sub-title of a chapter on several significant Surrey and White Rock businesses whose leaders try to keep Christian ethics and best practices in mind in their operations.

Barbara Warwick writes about Christian influence in visual, literary and performing arts, including drama and music.

John Redekop tells of a variety of Surrey/White Rock political figures whose work has been shaped by their Christian faith. Then, he has a “wrap up” that tries to address the question “Why do churches do what they do?”

It is the editors’ hope that the list will soon be available online, with regular updates to maintain accuracy and relevance. They also hope the book might be a template for future similar projects in other Canadian cities.