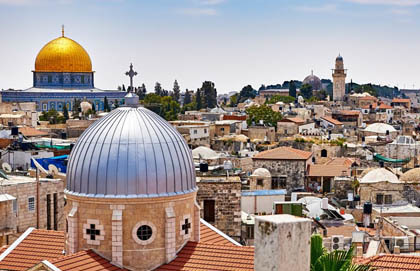 It’s almost expected that Jews will stand on the soil of Israel at some point in their lives.

It’s also quite common for Christians to visit the geography where their faith – and their Savior – was born.

It’s atypical, if not rare, to do what Richard Marceau did in 2015. Marceau is a convert to Judaism who works in a senior advisory role with the Centre for Israel and Jewish Affairs. Last year, he took his devoutly Catholic father – a Third Order Franciscan – on a tour of the Holy Land.

“I’ve been to Israel more than 30 times and it was the most religious trip I’ve ever taken there,” Marceau said recently during a chat in CIJA’s Ottawa offices. “We had just visited the house of Peter and had gone by the shore of the Sea of Galilee. We were reading the passages of the New Testament and just at that moment there was a boat that came by. It wasn’t that different from what it was 2,000 years ago.”

For both son and his father, travelling to holy sites in Israel deepened understanding of Christianity as a faith rooted in place. For Marceau, 45, it also illuminated the relationship between the Jewish faith to which he converted in his 30s and the Catholic world in which he was baptized and grew up, including the years when he was paid a quarter to serve as an altar boy at Mass.

It also bolstered Marceau’s commitment to a cause he’s become increasingly engaged in since 2008, namely the persecution of Christians in the Middle East. On a trip eight years ago to Egypt, he encountered a number of Coptic Christians and was astounded at the amount of fear they endured on a daily basis. He began following the issue closely, and was active within CIJA in a recent initiative to press Foreign Affairs Minister Stéphane Dion to raise Canada’s voice more loudly against the persecution.

Marceau admits he’s “perplexed” by how little outcry there is in Canada over the hundreds of thousands, if not millions of deaths, rapes, torture, beatings and placement into bondage that have afflicted the Christian population of biblical lands. CIJA has reached out to its own Jewish constituency, to Catholic and other Christians, to Sikhs, to Muslims, and even to non-believers to try to raise awareness and pressure, he said.

He encounters the persecution from the personal perspective of himself being a minority within a minority, meaning through the lens of both language and religious faith.

“The idea that anybody’s faith could be a basis for them to be persecuted is repugnant to me to say the least,” Marceau says. “I’m a double minority. I am a French-speaking person in English-speaking North America. I’m a minority there no (linguistic) protection is important to me. I’m also a Jew, another minority, and I’m a Quebec Jew, which makes me a minority within a minority. How can protection of minorities and the rights of minorities not be fundamental to anything and everything that I do?

“Just simply by being me, I must be aware of the importance of protection for minorities. There is the intersection of growing up as a French Canadian - or as a French Quebecer, whichever you prefer - and also being Jewish that solidifies that moral imperative for me.”

When it’s pointed out that he’s part of an even smaller minority of former Catholics who are now Jews and who have visited Israel with their Christian parents, he laughingly protests that there more such people around than most Canadians might realize.

“I’ve met quite a few,” Marceau insists. “Though it’s true, we wouldn’t fill the Bell Centre.”