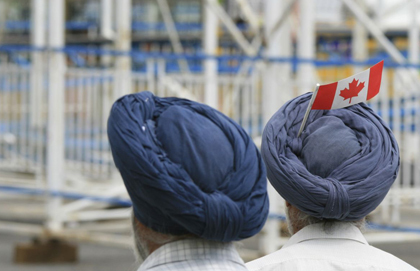 Religion in Canada’s Public Square May 11, 2016  |  By Stephanie Schoenhoff

“The answer is definitely yes. To be clear, there are pros and cons” but “I’m of the opinion that faith communities add to social capital—the kind of social capital that does allow for society to flourish,” says Reimer.

Dr. Reimer is the Director of Crandall’s Cross Cultural Learning Certificate program. His passion for sociology of religion was born out of his childhood growing up in Japan as the son of missionary parents. From a young age, Dr. Reimer has been keenly aware of the influence that cultural values have on personal ones, and continues to probe this topic in his vocation today.

His most recent scholarship examined the ways in which religious communities engage in the public sphere in North America.

“A recent study that I and another colleague did of evangelical congregations in Canada shows that in general, people who are religiously committed—in the sense that they are institutionally committed, that is, they go to a church, synagogue, mosque etc.— are much more likely to volunteer and give than those who do not. And this is highest depending on how often they participate in their religious institution. So we know there’s a strong correlation there,”

Reimer was interested to find that these philanthropic qualities amongst religious people weren’t only specifically applied in faith spheres.

On a more personal level, “there is tons of research also that shows that [faith is] good for personal well-being on the micro level. So we know people who are involved in congregations live longer they’re more likely to handle grief and difficulty because of social support, and all kinds of things,” says Reimer.

“There’s a lot of evidence that suggests that people who are in good community settings—which a lot of religious institutions provide—are much more likely to thrive.”

But when it comes to the Canadian context, we have a long way to go in terms of true religious pluralism.

“In general, we tend to religiously coexist instead of being actually pluralistic,” he says.

“I would love to see the public sphere be a truly pluralistic public sphere where religious views are expected to be engaged as part of the larger picture on issues,”

“The whole notion of multiculturalism is one of mutual enrichment, which is really what we haven’t done in Canada in any way… In schools or places where we mix, we talk about cultural differences in terms of food or dress, but we rarely address religiosity,” says Reimer.

“We miss the richness that religious traditions can bring,”

What Reimer wants to see more of is people who are “committedly open.” He encourages students to remain in a receptive posture towards other faiths, not defensive or isolationist. Dr. Reimer stresses the importance of taking other beliefs seriously, and holding space for different views.

“Having grown up cross-culturally and having the ability to be critical of culture, I wanted my student to have this ability as well,” he says.

Dr. Reimer studied at Briercrest College and Seminary  and went on to do graduate work at the University of Waterloo and later, Notre Dame University studying at the cross section of religion and sociology. Learn more about Crandall’s Cross Cultural Certificate.