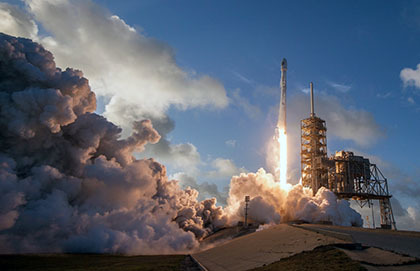 This is the second of a two-part series. To read part one, click here: "Spiritually Preparing for Take-off."

Outer space is like a new desert. This is something Stanley Kubrick intuited when he opened 2001: A Space Odyssey with stark shots of untamed, rocky wilderness, paralleling later scenes of vast, forbidding realms of space. Early in the Christian era, many felt called to venture out, alone or in communities, into the desert.

These anchorites were, in one sense, the astronauts of their day. They removed themselves from the amenities of society; they subjected themselves to punishing physical regiments (think of St. Simeon Stylites standing on his pillar for almost 40 years); they also performed the same routine, menial tasks every day; and most relevantly, they had to fight with demons, including depression, paranoia and loneliness.

These Desert Fathers wrote books about their experiences, which they have bequeathed to us as manuals to use when we also have these experiences. We should start using them soon, because they provide pastors with tools for the kind of spiritual direction that space voyagers will need.

Importantly, these Fathers saw desert as a blessing because it removed all the comforts that weaken us and make us slaves to our passions. This left us alone with God, unable to distract ourselves from His intrusive presence in our soul, as uncomfortable as it may be to face Him head-on. Pascal toyed with the idea that all our problems come from the fact that we can’t sit alone in a room for an hour; we’re too afraid of what gnawing problems we might find within ourselves without any diversions to occupy our attention. Conversely, the Russian mystic Catherine Doherty advocated for the spiritual practice of being alone in a room or cottage for 24 hours with nothing but an icon and a Bible, wrestling it out with God. She called this poustinia--the Russian word for desert.

Space, obviously, can serve this purpose just as well (for as many attention-consuming activities as an astronaut has).

An astronaut, perhaps of necessity, must become a kind of monk. They must find a way to see spiritual meaning and significance in their mundane, grueling work, just as the cenobites did in their manual labour around the monastery. They must be able to join their sufferings to Christ and offer them up, turning their physical constrictions into mortifications.

We have tended to lighten the demands on Christians in our day; less and less asceticism seems to be required by canon law. Space flight, taking us forward into the future, may compel us to go back to rigour that is more medieval.

Astronauts must also learn to experience God in solitude, in the endless “dark night” into which they plunge, by cultivating a deep interior life. They have an opportunity to find new meaning in the idea of the communion of saints and the presence of angels (who were linked by Scripture and by ancient and medieval thinkers to the stars).

In other words, they must be able to travel into the depths of their own interiority – into themselves, the microcosm – as much as they venture into the macrocosm outside themselves. They each must become what Doherty called a strannik, another Russian word suggesting a pilgrim who wanders through the human heart.

Finally, astronauts will not only need to look at themselves differently, but at space  differently. This is where the way preachers’ talk about God in homilies really begins to matter.

Space, as Lewis recognized, suggests emptiness, void, black muteness. This is no doubt part of why it seems so forbidding and lonely. But space has been sanctified, just as the chaotic seas have. The statues of Jesus resting on ocean floors representing Christ of the Abyss remind us of that.

Church Fathers like John of Damascus down to Franciscan theologians like St. Bonaventure have shown us that, through the Incarnation, God is, in some sense, united to all His material creation. This means that everything is potentially sacramental. The whole universe is good simply by virtue of existing and everything has something to do with Jesus. This is the most useful way of interpreting Teilhard de Chardin’s speculations about the cosmic Christ and Blatty, who was deeply influenced by Teilhard, depicts this by having one of his characters have a dream or vision of Christ crucified on the moon.

But how can outer space, even if we know it is touched by the Incarnation, appear as anything but a blankness without hope or consolation? How can space ever become the heavens for us again?

We may have to dig deep into the history of Christian spirituality and mysticism, but there is one strain of theological language we may be able to recover for this purpose.

Christian orthodoxy has always affirmed that, while God has an analogy to His creation, the difference between creature and Creator is always greater than the similarity. Our “knowledge” of God is more like ignorance. Apophatic theology reminds us of this: it negates every positive understanding we have of God by reminding us that the reality is infinitely greater than we can define or comprehend. More to the point, in ourselves, we recognize that there is a reality underlying all our conscious, rational thought. Behind every word is a kind of inexpressible silence.

So it is with God.

When we get past all the created images God has made to teach us about Himself, we ultimately have to lapse into a kind of silence before One Who is ineffable, beyond our minds – yes, even “silent."

In his Stromata, Clement of Alexandria comments on John 1:18, which speaks of the Son being in the “bosom” of the Father. Of this bosom, Clement notes “some have called God 'abyss' because He envelopes and contains in His bosom all things, while remaining Himself inaccessible and without limit.”

God, the abyss of silence.

This motif likely fell out of popular favour because our minds like to reach for warmer, more concrete images of God in our devotion and in our time of need. It is not generally a very consoling image. Or, at least, it hasn’t been.

But when we find ourselves in the seemingly infinite blackness of space, seeing that dark silence as an image and analogy for the unfathomable and infinite love of God that envelops us may be comforting.