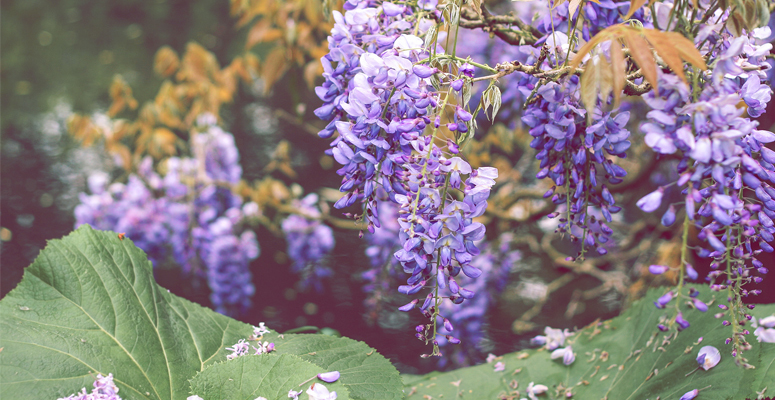 It was early June when Aina welcomed me home. She must have heard that someone new arrived and came bounding down two flights of stairs and into the backyard. The staircase – which looked out over Vancouver from the east – was veiled in wisteria on the brink of bloom. Already their fragrance was a cup overflowing; bees gathered to sip from the brim.

“Welcome,” she said. Aina’s face was framed with a light blue hijab and the brightness in her eyes was rivaled only by the pink of her cheeks.

I had just returned from nine months in Europe learning French, teaching English, and experimenting with every form of transportation and accommodation known to man. I was growing road-weary and ready to settle for a while; ready to be home. She was a refugee claimant awaiting approval to stay in Canada, but hers happened to be the arms that welcomed me back to the city where I was born.

She hadn’t been in Canada long when I arrived. Aina came from Afghanistan, leaving her family at the age of fourteen and following her older sister Mahsa to Vancouver. The two of them lived together in the apartment next door.

In the days that followed, Aina and Mahsa made this new place home. After Ramadan, they found me in the hallway and shared hot soup and fresh round bread with me. They passed by my apartment to say hello. Every day Aina could be found swinging on the hammock in the backyard. The shade of a young tree speckled the yard in light, and as weeks passed the sun grew warmer. I planted a garden, perhaps as a way of re-establishing myself in this place. It grew and so did the trust between us.

In July, Aina and I spent a week at my childhood summer camp, along with another young asylum seeker, Ara. As a director for the week, I invited them with some trepidation. Could an evangelical Christian camp be trusted with young Muslim girls? Would there be the time and space required for five daily prayers? How would they react to the Jesus-centric messages shared at chapel?

One night Ara disappeared from the evening campfire. Someone found her back in her cabin, recoiling in anxiety from her crowd of new friends. Had I been so naïve as to think that traveling to an island two ferries away would be distance enough to relieve them of their worries? The burden of displacement was deadweight, and a week-long ‘getaway’ only intensified Ara’s fears. Aina and I found her there on the edge of her bunk. Aina offered tissues and I sat on the floor at Ara’s feet. Others came. Most of what we said was silence.

I thought of the lesson learned from Job’s counsellors, whose greatest error was opening their mouths during their friend’s distress. I tried to let simple presence master over my desire to fill the silence with words. It remained empty for a long time. Finally, Aina spoke. “Allah is caring for your family, Ara. Everything will happen in the right time, inshallah. Sometimes we don’t understand these things until later.”

More silence and tissues passed. Then someone else piped up, “God is with you Ara. God is present in suffering as in joy. You’re not alone.”

Grief was diffused – or at least dismissed for the night – as Aina whispered a joke to Ara in the language only teenage girls understand. Somehow the evening ended in laughter. The silence was broken, and more tissues were needed for a welcome kind of tears.

The next week we were in the backyard again – where the wisteria was dropping its flowers at the foot of the stairs. I asked Aina what she thought of camp. We talked about tubing and wide games and cabin jokes…and then we talked about God.

“Did you sense,” I ventured, “that we were talking about the same God, that night with Ara?”

To equate Allah with the Christian God didn’t seem as blasphemous as I had been brought up to believe. No, it was good and right; we knew that we had seen the beauty of God together.

I still don’t believe that all people are climbing up different sides of the mountain that is God; I don’t go for the blind men and the elephant analogy. I think our worldviews are different and deserving of distinction. You’ll find me reciting the Nicene Creed with the best of them.

But I’m becoming more comfortable living with a sort of faithful agnosticism. This lack of self-assurance uproots animosity and clears a generous, gracious place. It carves out the room required to laugh and to hold each other’s grief and to pray together.

Being Aina’s neighbour is challenging me. There is much I don’t understand about Islam and much I hope to learn. I don’t profess to understand the Prophet and the five pillars often escape my memory. But I hope we’re building something in this backyard, beginning with five pillars of our own. Welcome. And trust. And mutual transformation. And celebration. And prayer. Might these be solid enough to hold up our common life and honour our difference?

Aina welcomed me home and extended trust amidst intense personal uncertainty. Her hospitality makes me wonder if the binding agent between us might be the reality of our own displacement. She gives me hope that I, too, might settle into my identity as a sojourner and learn, from wherever I stand, how to say “Welcome.”