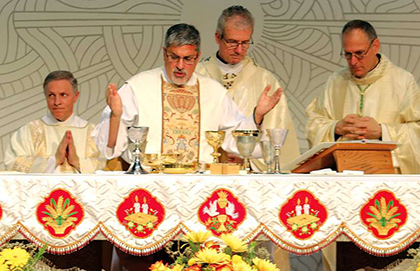 From Fatherhood to Priesthood October 7, 2019  |  By Peter Stockland

When newly ordained Fr. Robert Assaly refers to seeking help from “Mother,” the term is just as likely to refer to his wife Nancy as it is to the Blessed Virgin Mary.

With his family of six children, it’s a natural fatherly thing for the first married Catholic priest in the Montreal archdiocese to say. Such was the case last week during an interview when one of his sons popped into the study in the rectory at St. Thomas More Church in suburban Verdun to ask a question.

“Mum will have it,” Assaly assured the young man.

It was a small, lived moment that illustrated the enormous difference between him and his brother priests. Its daily ordinariness showed the truly unusual character of Assaly: how usual he makes the unusual in his life.

The evidence? His marital status is but one dimension of that. His ordination on Sept. 20 at age 59 came after 10 years of discernment. That discernment came after 35 years as an Anglican priest, during which he married and began his family with Nancy. It doesn’t end there. The Anglican priesthood beckoned when he was in his mid-20s and an avowedly atheist millionaire stockbroker.

A “God crisis” in 1984 led him back to Christian faith, marriage, children and Anglican orders in 1991. When the Assalys moved to Montreal from Ottawa in 2007 so Robert could pursue a PhD at McGill, Nancy found them a spiritual home at St. Ignatius Parish on the city’s west side, primarily because of its youth ministry.

In 2009, he knocked on the door of the archdiocese seeking Catholic ordination. In 2015, he and Nancy were formally received into the Catholic Church. On a Friday evening last month at St. Thomas à Becket parish, through the grace of a provision introduced by St. John Paul II during his pontificate that grants an exception for some already-married men to become priests, Archbishop Christian Lépine welcomed him home to Rome.

“I have no doubt the Holy Spirit works in very mysterious ways that I can’t fathom,” Assaly told The Catholic Register. “By the time I arrived at the altar, after all the processes in the 10 years since I first approached the archdiocese, I was ready. I was more than ready.”

Yet he readily acknowledges that he firmly believes celibacy is not only defensible but essential to Catholic priesthood.

“God wouldn’t be calling me to the priesthood without also affirming my vocation to marriage. The two have to go hand in hand. I’m fully able to say the Mass and offer the holy sacrifice in personae Christi. But I can’t make the offering that celibate priests can make. I can’t make the beautiful offering of not having a family and marrying only the Church,” he says.

For Assaly, it’s more than accepting that he’s been given the gift of being an exception. He looks startled when asked how he feels about becoming a “totem” for both sides in the celibacy debate within the Church: one side arguing slippery slopes and the other pointing to the pragmatic benefits of welcoming married priests into an institution with a dire shortage of vocations.

“I’m not a Catholic for pragmatic reasons,” he says firmly. “There’s a lot more to it than being pragmatic. It’s about self-offering, which is all about the Cross.”

That’s not to diminish the very real concerns of parishioners who see congregations greying, dwindling and closing. St. Thomas More, where he will serve in his first Catholic parish, is down to about 100 families, perhaps 150 people total. Montreal has endured a vocational crisis for decades, though Assaly says that’s a problem that could be resolved by even greater reliance on priests from elsewhere in the Catholic world.

Fr. Peter Sabbath, the priest at St. Thomas á Becket who supervised Assaly during his final year of training before ordination, says the attitude perfectly captures the commitment to the disciplines of the Church. But it also underscores the way coming from an unusual direction toward the Church can give a form of vision sometimes denied those who follow more usual paths, he says.

Sabbath, too, is a convert to Catholicism, in his case from “agnostic Judaism” many years ago.

“I have great respect for both Fr. Robert and Nancy. To be a Christian in this culture requires heroism. It might be hard for some people to accept a married priest. Others might see it serving their own purposes. But anyone who thinks he going to try to lead the Church into becoming another kind of Church … that’s not what he’s about.”

The one change Assaly does want to be part of is leading the Church back to its traditional use of beauty, especially in the liturgical beauty he was immersed in during his years as an Anglo-Catholic.

“That (Anglo-Catholic) tradition, if it venerates nothing else, venerates the English language: Cranmer’s translations and so on. When we used to say ‘Therefore with angels and archangels and all the company of Heaven, we sing,’ it was palpable. It was felt. At my ordination, I tried to select some beautiful and meaningful music. We have to beautify the liturgy again.”

Perhaps, he seems to suggest, that is something we should ask our Mother.