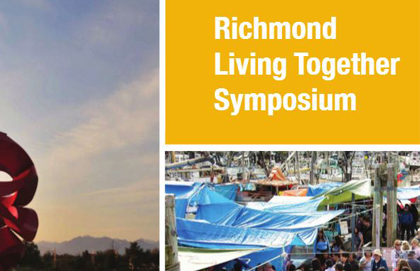 The Canadian Race Relations Foundation will hold a symposium in Richmond, B. C. this Thursday January 21, on whether cities in this country are doing enough to combat intolerance, including toward religious faiths. The meeting is one of a series the organization is holding across Canada on such issues this year. Just before the event, Thread of 1000 Stories writer Peter Stockland spoke with CRRF Executive Director, Anita Bromberg.

Peter Stockland: What is the mandate of the Canadian Race Relations Foundation?

Anita Bromberg: It really is a credit to the vision of the Japanese community because out of their struggle against racism and for equality, coming out their horrific experiences, they saw the fight against racism as a community event. Their answer was to take some of the redress money (for mistreatment during the Second World War), convince the Canadian government to match it, and put a permanent endowment in place to fund and create a Crown agency that’s mission at its very core is to fight racism as a tool for building diversity. We’ve stuck with that vision and mission.  It will be 20 years this year since the foundation’s opened its doors.

Some words and ideas have changed a little. We felt that in the latter couple of years there hasn’t been enough discussion around faith. We also felt that an emphasis on Canadian values was the road forward. There was too much negative, rather than building on the positive so the emphasis has turned to building social cohesion and identity. But the mission at the core is still the same, and the need is still great.

PS: How did you become involved with the CRRF?

AB: I come from a human rights background, having practiced human rights law, and worked in legal research on human rights for many years. I felt the need to reach out to groups in the community involved in the fight against anti-Semitism and against racism. Then this opportunity came up. I’ve been here a year and a half now.

PS: How did the shift to the inclusion of faith issues and religious freedom come about?

AB: Every year we do a number of surveys, and we did one about two years ago that focused very much on (faith). It became evident there was a lot of misunderstanding about faith and we felt having a dialogue around faith would be important. So we obtained some funding from the department of multiculturalism for a project called Interfaith and Belonging that had various workshops and also envisioned the National Film Board project that just came to completion. We’re now taking that to a virtual classroom exercise in March. We also have the vision of the Our Canada project, which is to keep the conversation going around diversity in all its forms.

PS: Is it fair to say part of the impetus for moving into the faith field was misunderstanding of Islam?

AB: I don’t think that was so initially, though it has certainly become an important recently. An Our Canada report released in 2014 showed there was definitely a lot of misunderstanding. I think it will become more of an emphasis as we move into some of our other research projects looking around how to use Canadian values as a barrier to extremism, for example.

PS: And to have those dialogues without even the necessity to even agree on what might be said….

AB: The conversations come about how to reconcile multiculturalism with growing isolations of communities. The vision of the Foundation at its core is that multiculturalism has two sides. You can come to Canada and practice your religion, for example, but it also means buying into the Canadian vision and Canadian values. People say they don’t know what Canadian values are but when we do the surveys there’s a very strong consensus of what we Canadians identify as our values. Those are values that Canadians in vast numbers want to protect.

PS: That’s a delicate area though as far as where those boundaries are, isn’t it? It’s not an easy thing to discern.

PS: You have a background in fighting anti-Semitism as part of your human rights work, do you bring a faith perspective to the work? Does it speak to the core of your own faith to be involved in this kind of work?

AB: Yes, absolutely. Many times when we have our workshops around faith, I feel I have to hide who I am because I couldn’t get the basic understanding, and that directly impacts on one’s feeling of inclusion and ultimately one’s success. I’ve felt the barriers. I’ve tried to find ways around them. Sometimes it’s around kosher food. Sometimes it’s around holidays. Sometimes it’s around resentment from another employee, maybe someone seeing me leaving early because I’ve gotten an accommodation. Sometimes it’s political jokes that turn into harassment, not so welcome comments. It is still a struggle that we all have to talk about.

PS: Two powerful questions I’ve run into recently are: “What do I have to do to be Canadian. Why am I not Canadian just because I practice a different faith?”

AB: Well, in fact that is Canada. That’s what we do: we respect other faiths. It doesn’t mean we don’t have dialogues around what we comfortable with or not comfortable with as Canadians. But, that’s why Jews came to Canada. This was the land where, for the first time, they could hold office because they found ways to vary the oath. Why is the oath of allegiance to the Crown? Because it used to be to the Church, and changing it to the Crown was a way of de-emphasizing one religion over another. It was a way of inclusion. Before we change the oath again, we need to consider that and have a dialogue around it.

PS: Dialogue is a powerful response, but it’s not always an easy response, is it?

AB: It can be very difficult. We have to be prepared for that. We’re having a difficult time around the “barbaric practices” dialogue. Of course, some of the problems are with the titles and the words, but we’re also finding people don’t want to have an honest dialogue around it. To me, that’s troubling because I don’t think we can move forward as a society if we’re not ready to have those dialogues. Before the event (this week) in Richmond, we got an e-mail condemning us for even wanting to have a dialogue because it was seen as just an invitation to bring “trash” – meaning refugees – into Canada. There are people who just aren’t ready so there’s still lots of work to be done.

For more information on the Richmond Symposium see here.