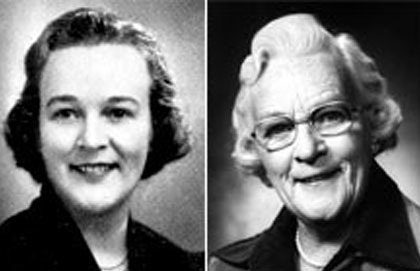 Cathie “Nikky” Nicholl was born in 1910, the eldest daughter of a Scottish missionary family in Northern China. Her parents, she often said, inspired her life-long love of reading scripture and singing hymns.

Also shaping her life in those early years was the Cheefoo School in Yantai, in northern China, affiliated with the China Inland Mission. Recalling the school, she said: “There was a wholesome, normal spiritual foundation for everything [we] did. They constantly stretched us. They never undershot us.” (This May be Your Life’s Work video 1999)

Shortly before she turned 19, Cathie left China for Toronto, intending to take up teacher training. In preparation for that, she took Canadian business and history high school courses – prerequisites for “foreign” students. She never did get to university – at least not as a student – instead, beginning work the next year as secretary in the fledgling Inter-Varsity Christian Fellowship. Soon, she was working directly with students.

“When I started, I didn’t plan to work for 50 years, but was very conscious of the fact that God had called me into this thing … I loved the kids. They were like adrenaline to my system.”

Inter-Varsity work took Nicholl to each of Canada’s provinces, as well as to Jamaica. She had three stints in the Caribbean, brought on in part because many Jamaican students went north to Canada to study in Canadian universities and encountered Inter-Varsity there.

“Nicoll … was sent by [International Fellowship of Evangelical Students] to Jamaica for three months in 1948. She succeeded in pioneering a high-schools work. In 1952 a university group developed too, through a second visit from Cathie Nicoll; and four years later the first full-time staff worker, Richard Bell, was appointed.” (Lowman,  291-5).

Back in Canada, she directed Pioneer Camps in Ontario, Alberta and British Columbia. She was the first Pioneer Pacific Camp, on a scenic bay on Thetis Island off the east coast of Vancouver Island, in 1955. (The ‘Nikky’ moniker was in line with the long pioneer practice of assigning nicknames to camp leaders.)

“Nikky” passed away on May 3, 2004. Adele Wickett, editor of Cool Waters Beckon Me (2005), a Pioneer Pacific 50th anniversary memoir, noted that Nicholl died “as this book was in process. She hoped to be present at its launch; instead she leaves her many ‘children’ to celebrate their inheritance.”

Nicholl never married and had no children. So Wickett’s reference to “children” gives meaning to the leadership role she played. Inter-Varsity and its high school affiliate, Inter-School Christian Fellowship played significant roles for decades in giving a faith-based perspective, to thousands of students in Canada’s public education systems. The role of inductive Bible Study methods and an emphasis on preparing for life through a robust faith were personified in Nikki’s work.

Nicholl also had a strong belief that sound Christian hymnology, based in traditional classic and gospel singing, was an important entrance for the faith to be implanted in young lives. The vocalizing of hymns like Great is Thy Faithfulness and The Lord’s My Shepherd, among many, were important parts of most Inter-Varsity, Inter-School and Pioneer Camp events. (Nonsense songs, like Alfalfa Hay, helped to break the ice before getting down to serious spiritual stuff!)

Lowman, Pete, 1983. The Day of His Power: A History of the International Fellowship of Evangelical Students. Downers Grove, IL; Inter-Varsity Press.

Sutherland, Wilbur, producer, 1990, This May Be Your Life’s Work: A film about Christian Leadership Training Based on the Life of Cathie Nicholl, CM. VHS. Toronto, Imago.