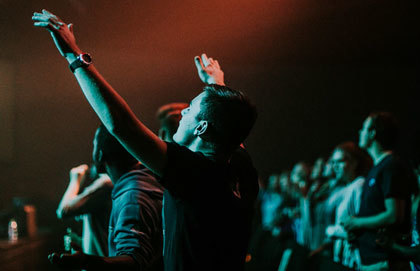 “The Gospel is not fine-tuning,” Pastor René Bruel told the 10,000 students gathered in the enormous stadium of the America’s Convention Center in St. Louis, Missouri for the Urbana 18 conference.  He paused.  “It’s open-heart surgery.  It’s rebirth.”

Pastor Bruel’s summons to a raw, real, and transformative pursuit of the Gospel echoed the exhortation Calvin Bennett, vice-president of camps for InterVarsity Canada, had given the night prior to the 400 members of the Canadian Student Leadership Track – namely, to be open to the invitation of Jesus throughout the five days of Urbana.

The conference, which happens every three years, began in 1946 in Toronto, Canada with the intention of reaching college students and catalyzing their involvement in global missions. Many of my friends and I had come to the 25th session with hopes of discerning how God might be calling us to use our gifts and passions, too.  With the opportunity to join a “track” of like-minded students centred on a specific theme like justice or business, access to an massive exhibit hall of different ministry booths, and 200 seminars featuring speakers on topics ranging from medical missions to public policy, Urbana 18 seemed like a fantastic investment to help us wrestle through future possibilities.

Coming into the conference, I expected that staying open to God’s calling would not necessarily be easy; I did not expect that the focus of my Urbana experience would be what was at times incredibly uncomfortable work that God would do in my own heart.  Each morning began with a manuscript study of a passage from the Book of Revelation, the focus of the conference.  As we studied visions of calamity and persecution, I encountered the reality of Jesus as King who rides into the battle of human history already victorious.   In light of His ultimate triumph, followers of Christ are summoned to endure tribulations as faithful witnesses, yielding Him their complete allegiance.

During our manuscript studies as well as our plenary sessions, grappling with the Book of Revelation challenged us to recognize ideologies in our lives that rivalled this allegiance.  In our hurried culture that encourages individuals to glorify themselves via social media and excessive consumption, we can desire a “gourmet faith.” To quote our speaker Beth Paz, however, we often “microwave our spirituality” instead.   As freezer meals are a staple of my university experience, this imagery convicted me of times that I have stored away my walk with Jesus, and then “microwaved” it for use in convenient and comfortable contexts.

Discussion of the temptation to compromise faith in Christ continued in the track for Canadian leaders.  Jethro, a student passionate about evangelism, spoke of the snare of “[keeping] our faith to ourselves” because...[we] don’t want to hurt others’ feelings”.   Nolan from Prince George, B.C., aptly identified the lure of “making sure that you have everything you need first” before serving others, noting that “this is not what the mission of Jesus has, is, and ever will be about.”

In addition to identifying hindrances to advancing the mission of Christ, Urbana 18 invited attendees to address these corporately.  We entered one plenary session to find six towers in the center of the stadium, covered with images evoking the concepts of luxury, power, and security.  Following a reading from Revelation 18, a passage about the judgement of the Babylonian Empire, dancers streamed into the stadium and began to lay blocks around the towers. Their harmonious labour, however, gradually evolved into tortured gestures as the music, once peaceful, became ominous.  Eventually, they could no longer move but were prostrated around the towers.

After a period of silence, a Hispanic woman, a Native American woman, and an African American man, stepped forward to read the remainder of the passage, which was a summons to God’s people to “come out” of the ways in which they had devoted their lives to the practices of earthly kingdoms rather than to God’s Kingdom. Before the Native American woman could read her portion, however, she began to weep.

We sat for a few minutes listening to the sound of her cries, remembering the marginalized who have received injustice at the hands of the Church and realizing that their number included many of those present among us.  We responded with a time of lamentation, mourning the “tainted Gospel” that the Church had presented and confessing Her sins as a corporate body. The speaker subsequently reminded us of the importance of this step, remarking that “transformation cannot come without recognition of where we are and repentance.”

Having asked for the grace to reject compromise, we were called to step into the privilege of living Jesus to others.  Katie from Williams Lake, B.C., reflected: “when we imagine where Jesus is...our eyes are opened to those He is inviting us to have compassion for, because He is with the broken and needy.”  As I walked the hallways of America’s Center, people whom I had just met for the first time as well as friends from back home excitedly shared with me how they were being summoned to action.

Brandon from North Carolina, whose community often disregards the Filipino aspect of his heritage, shared that he felt called “to help racially reconcile the separation of white and [Filipino] people so that each can see each other better in the eyes of God.” Two of my friends studying nursing, one in South Carolina and the other in Ontario, were deeply impacted after a talk on mass incarceration to investigate how they could work among those in prison.  Others commented that they were reminded that calling is “also about loving those around us locally”, and are now meeting with churches and individuals back home in faithful response to needs in their communities.

As attendees accepted the invitation to live as part of the Kingdom, we learned to embrace its rhythms with joy.  Between sessions and seminars, students playing songs on their guitars in the hallways of the Convention Center would be joined by dozens of others, strangers to each other but united in their worship.  InterVarsity’s longstanding commitment to reaching people from every tribe, tongue, and nation was evident as members of the worship team introduced us to songs written in their native languages, such as Farsi, Spanish, Hawaiian, and French.

The fervency of the 10,000 voices reverberating in the stadium during the plenary sessions echoed the promises in Revelation of multitudes worshipping in the New Jerusalem.   On New Years’ Eve, we celebrated communion together, conversing with new friends in the row next to us as we waited for our turn to partake in the sacraments.  The conference concluded at midnight to anthems of praise.  As we left the stadium towards our separate ways in the New Year, I realized that I had received something far more important than a clearly outlined vocational path during Urbana 18 –  the call to confident, wholehearted faith.