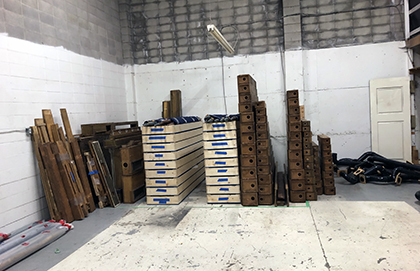 When a fire broke out in the Trinity Evangelical Lutheran Church in Whitehorse, it seemingly destroyed a beautiful pipe organ built in 1926.

In some ways, the faithful had lost hope that their much-loved musical instrument, which was an integral part of the church since 1980, could ever be restored.

But Jason Barnsley, a restoration specialist in Calgary who takes care of pipe organs in the city, in southern Alberta, and all the way to Victoria, B.C., came to the rescue and has restored the hope for church members, that the pipe organ will again one day play the beautiful music they had come to love and cherish.

Barnsley had heard about the fire in 2017 and contacted the church, offering his services.

“They didn’t call at first. The story went national, they got so many emails, and calls from just everyone wanting to donate their mother’s little home organ to the church. Mine got lost in the shuffle,” says Barnsley, who is also a music minister for Church of the Good Shepherd, a small Anglican church in Calgary.

“Fast forward two years. At the time I was working with the National Music Centre, Studio Bell, in Calgary as an instrument technician . . . lo and behold in late 2018 I got a call from them (the church) and they asked me if I would come take a look at the pipe organ and tell them what their options were.”

He flew up to Whitehorse in February 2019 to take a closer look. About six months later, he heard from the church, which wanted to go ahead with the work.

“Slowly over the year, I’ll start to pull out the pile and reassemble it and rebuild stuff and put it back together and eventually get it playing here in Calgary first, before I take it apart again and take it up to Whitehorse,” explains Barnsley, adding it will take a year to 15 months for the work to be complete.

“They’re very complex, complicated instruments. So it takes a lot of time to learn how to do it. There’s science and math behind it. I always chuckle because I was famous for telling my teachers in middle and high school that I was never going to need algebra or calculus. Yet here I am doing something that requires it almost daily.”

Laura Cabott, a church member on the organ fundraising committee, says the console of the pipe organ was very old and its wiring caused the fire which destroyed the console. There was also some minor smoke damage to the church. The actual pipes were in a separate area so they were not damaged.

“The console definitely needed to be replaced and we decided with Jason’s advice that if he was going to fix the console and reconnect everything we might as well have some much needed work on the pipes,” says Cabott. “The pipes, and a lot of the apparatus that connect the pipes, was in pretty good shape considering the age but there was definitely work to be done.”

Cabott says the pipe organ was for sale about 40 years ago from a church in Pennsylvania. It was purchased for one dollar and it was transported to the Yukon.

“Once it was installed it was first played in 1981,” says Cabott.

“It was pretty unique to have this beautiful musical instrument that was historic. So the fire was disappointing . . . The congregation had to decide do we fix it, do we keep it or do we say that’s the end of the organ and the era? There was a lot of discussion about that and the congregation took some time to consider that.”

One unique fundraising initiative is the Adopt a Pipe program where people can adopt one of the 762 pipes.

Born in Regina and raised on a farm just south of Lloydminster, Sask., Barnsley has been building pipe organs for 20 years. He got his start when he went to the U.S. to study music at Kutztown University, a small liberal arts school in Pennsylvania. Close to graduation, he served in a little church that had a little pipe organ that needed some work.

The church found a local pipe organ builder to fix it. Barnsley, who always had an interest in building and maintaining pipe organs, asked the man if he was looking for apprentices.

“At first he said, ‘Absolutely not, because you’re a musician. You would be worried about cutting your fingers off in the saw.’ But when I was in college one of my degrees was in theatre and mostly the backstage aspect of it. So I was used to working around saws,” says Barnsley, who apprenticed with the man for about seven and a half years just north of Philadelphia in Stowe. He is one of the few specialists in the field.