Following the 1921 Federal election, Agnes Macphail became the country’s best–known woman as Canada’s first female member of Parliament. But Agnes was not celebrated primarily as a fighter for women’s suffrage; her campaigns were mainly for co-operation and against war, for a better deal for the farmers, and against the existing Canadian penal system. In fact, though she fought to better the conditions of women, she walked into politics as if sexual differences did not exist. She fought as an equal with men for the issues that moved her.

“Her life might have been much easier. But this was the path she chose — the craggy course.”

Agnes was born in 1890 in a three-room log house on a farm in Ontario. After completing elementary school, she remained at home to help her mother with two younger sisters. Her family eventually saved money for her board so that she could attend the nearest high school in Owen Sound. She graduated in 1908 to the new teacher’s college in Stratford, where she lived with her uncle and aunt. Agnes was so impressed with their religious faith and social conscience that she joined the Reorganized Church of Jesus Christ of the Latter Day Saints. When her aunt presented her with a Bible, she read it diligently, noting passages in both the Old and the New Testaments that she found particularly significant. 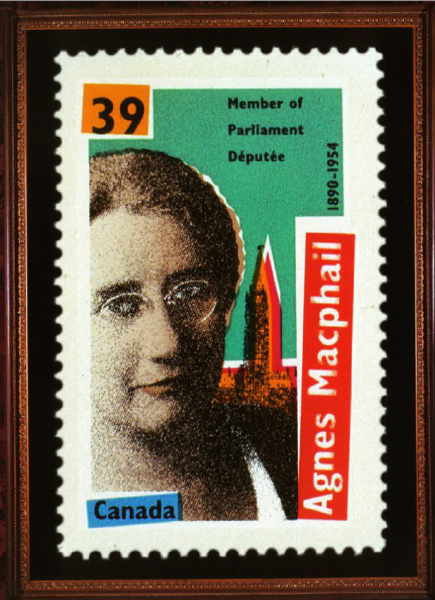 Between 1910 and 1921, Agnes taught in rural schools in southern Ontario and Alberta. Her contact with the United Farmers and Farm Women of Ontario afforded her opportunities for political involvement. Although this agrarian movement for rural social and economic betterment had only begun in 1914, a grassroots upheaval during the 1919 Ontario election led to the formation of the Farmer-Labour government of E.C. Drury. While helping to organize local groups, Agnes gained recognition as a forceful speaker, leading to her 1921 federal candidacy on the Farmer-Labour ticket and to her becoming the first woman member of the House of Commons. In Parliament, she soon joined other Progressives led by T.A. Crerar. Despite the affiliation, her position as the only woman in the House of Commons until 1935 attracted significant attention. But the media spotlight intensified as a result of her unconventional ideas. She likened the agrarian revolt to a righteous uprising against corruption in government and the subordination of the needs of ordinary people to the special interests dominating the two old-line parties. Although she found the prophecies of Isaiah to be a source of personal inspiration in advocating ways to change Canadian life for the better, she was outspoken in support of religious and ethnic tolerance. Politics were a sufficient source of division; religion should not have to be as well.

Agnes believed in thinking anew about collective problems rather than reverting to outmoded prescriptions. Considered a radical, she found much of the establishment in Toronto and Vancouver closed to her. Despite her attacks on big business, the media, and her feminist ideology, her rural constituents continued to re–elect her to Parliament — four times. She emerged as one of the best orators in the House of Commons, but often found herself praying silently for guidance about how to vote. Agnes supported the Progressives’ anti-imperialism and their quest for Canadian autonomy, but it was her championing of the advancement of women, peace, and prison reform that really set her apart.

By working to remove laws that treated women differently from men in such matters as citizenship and divorce, Agnes strove to enhance the position of her gender. “I desire that women have equal rights,” she said. As a regular on the Canadian Chautaugua circuit in the 1920s, she once was confronted by a male heckler who yelled, “Don’t you wish you were a man?” She retorted, “Yes, don’t you?”

In 1929, her activity in the Women’s International League for Peace and Freedom along with Lucy Woodsworth led to her being appointed as Canada’s first woman delegate to the League of Nations in Geneva. With the onset of the Great Depression she became increasingly critical of capitalism, an economic system that she likened to an elephant dancing among the chickens while crying “every man for himself.” In 1932, she led the United Farmers of Ontario into affiliation with the new Co-operative Commonwealth Federation (CCF) headed by J.S. Woodsworth.

As prison populations burgeoned, Agnes intensified her efforts to end the inhumane treatment of criminals and the inordinately high recidivism rates that made beggars of inmates’ wives and children. She was especially concerned that young offenders be treated apart from the adult population. Her courageous and well–orchestrated campaign led to a 1938 royal commission that revealed gross defects in the country’s penitentiaries, resulting in prison reform after World War II.

In 1940, Agnes lost her seat in the House of Commons after nineteen years of membership. Following a family tragedy in which a niece shot an uncle, Agnes whisked her nieces and nephews off to Toronto, rented a large house, and began taking in boarders to pay the rent, all the while serving on the executives of the Canadian Civil Liberties Union and the Canadian Association for Adult Education. In 1943, she ran for the CCF in the Ontario election. She was elected for York East, becoming the first woman seated in the provincial assembly. She was defeated in 1945 and re–elected in 1948. By advocating improved provincial correctional facilities for young women, Agnes inspired the founding of the Elizabeth Fry Society of Toronto. Genuine pay equity for women was another concern, but in the end the province legislated only equal pay for equal work before Agnes retired from public life in 1951. 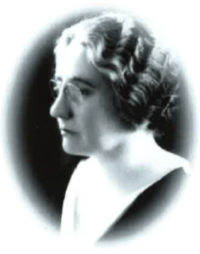 Agnes lived in Leaside and attended Don Mills United Church, where she also taught Sunday school. No explanation is offered as to why she left her former church for a mainline Protestant denomination, but it is understood that faith played a meaningful role in her life. “No one person built the church,” she reflected, “but each had it is part in something which by its very age and continuity became something more than the sum of them all.” She believed that to “be happy we all need to lose our little spirits in the Great Spirit which is called God. A person who has no bigger idea of himself is almost certain to be a deeply unhappy person.”

After suffering various ailments throughout her life, including a thyroid imbalance, Agnes Macphail died of a heart attack in Toronto in 1954 at the age of sixty-three. At her funeral, her minister eulogized: “Her life might have been much easier. But this was the path she chose — the craggy course.”

Dr. Terry Crowley is a professor emeritus at the University of Guelph, where he chaired the history department from 2003 to 2008. He earned a PhD at Duke University in 1975, having previously studied at Carleton and Bishop’s University. During his time as a history professor at Guelph, he edited Ontario History Magazine. His research work has centred in Canadian history, focusing on rural, agricultural and women’s issues. Among his writings: Agnes Macphail and the Politics of Equality (Toronto: Lorimer and Co., 1990).

The Sacred Art of Fasting

On June 27th, 2014 the Intercultural Dialogue Institute (IDI – GTA) held a Pre-Ramadan Dinner at the Art Gallery of Mississauga as part of its annual series of “Community Iftar (fast-breaking) Dinners” during the month of Ramadan. Read the address by Muneeb Nasir here.

Learn about the Ottawa Holocaust Survivors’ Testimonies Project, which features interviews of ten local survivors. The survivors’ experiences include ghettos in Hungary, Nazi slave labour camps in Germany and death camps in Poland, hiding in non-Jewish homes in Holland and France and in a dugout in Ukraine, and surviving as refugees in Romania and Shanghai.

The Prairies and a Theology of Brokenness

Canadian musician Steve Bell sits down with Convivium's Hannah Marazzi to talk about his sources of inspiration and the geography found beyond physical parameters.