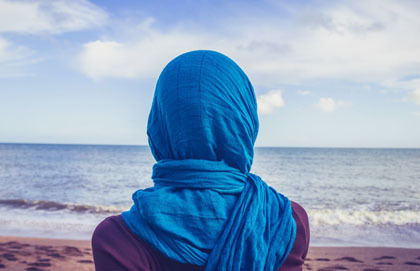 I sat in front of Marina Nemat in a Toronto café and watched her story unfold in front of me word by word.

A gifted writer and story-teller, Marina’s testimony as a torture survivor spills out of her without effort.

“In solitary, the sun comes up and never goes down. A day lasts 3000 years,” she starts.

Imprisoned at the age of 16 for rejecting government teaching after the Islamic Revolution in Tehran, Marina spend over two years in the infamous Evin Prison. She was raped and tortured, and later forced to convert to Islam and marry her prison guard—ultimately providing her a means for escape—but not without lasting psychological, emotional, and physical trauma.

Marina is the protagonist of her story. I, the audience, stand altogether perplexed by her resilience—it’s the kind you read about in the best fiction novels and see in movies.

But Marina’s resilience isn’t conjured up, anyone could see this by the way she tells her story. She continues talking, letting me in on the details about her time in prison.

When she arrived at Evin Prison, she was in shock. She remembers feeling nothing about the terror unfolding around her. Betrayed by her own emotions, she realized she’d have to rely completely on reason and logic to process what she was facing.

I would say, ‘Where the hell are you? What’s happening here is not fair.’ Then, I would almost hear somebody saying, ‘Well, it wasn’t supposed to be fair,’

Then I would say, ‘That’s kind of a funny thing to say, because aren’t you supposed to be fair and just?’

And God’s response would be: ’Well how do you define fair and just? Tell me,’ and I would say to that, ‘Well, people would not do terrible things to other people, so that other people cannot beat me to a pulp, and they cannot rape me, and they cannot do whatever they want to me. How in your vocabulary—excuse me, tell me your vocabulary—is that just?’

And God just said, ‘Ha ha. Listen to this one: What do you think, if you look back at your life before you ended up here, was the most important thing to you?’

Marina realized that at 16, she defined herself as a troublemaker, as a person who challenged everything. It was her ability to dissent against almost everything that was most precious to her.

Marina points to her iced-coffee, “If you told me this drink is beige, I would have challenged you. I would have told you to prove it to me. Maybe it’s not, maybe you’re seeing things. I had to think about arguing about everything,”

Marina realized that this ability to argue ultimately was an ability to exercise free will. And that free will, was indeed the thing she cherished most.

It occurred to her that free will allowed her to argue about everything with everyone—even God himself.

Marina concluded that torture, then, is a logical consequence to free will. That, if God gave people the choice to do whatever they want, surely some would abuse that freedom to murder, some to steal, etc.

This conclusion allowed her to make sense of God in the midst of her situation. We cannot blame torture on God, she says: It’s a human choice. But nonetheless we tend to blame God for a lot of things he has nothing to do with—perhaps we do this because it’s easier than taking the blame for your own actions. “Mea Culpa” (by my fault) says Marina, are two words we rarely utter but ought to take more care to.

Despite having a grasp on the rationale behind the problem of evil, Marina was not exempt from the pain of it.

“This whole free will thing—which I do respect and love—caused me great suffering,”

The thing that got her through this pain, she would say, is that the God she worships knew a great deal about suffering himself.

“The thing about Jesus is he is extremely approachable,” she says.

Marina’s image of God is not someone who is sitting on a throne.

“That’s just not right,” she says. “I think the only way I can understand the way the world works is if God is an actual, active, part of it, and not as a bystander, completely immune to all the suffering that we have to go through,”

But to a God who decides to experience suffering himself Marina says, “Ok, then, we have a deal.”

Most people would find hearing Marina’s story alone proof enough that God doesn’t exist. Or at least, that the God of her Catholic faith isn’t one worth worshipping.

When asked how it is she maintains a faith after such a horrific experience, Marina tells me that she can’t say why she is the way she is. “Maybe it’s genetics. Maybe it’s upbringing. Maybe it’s life experience. Maybe it’s all of the above. Maybe it’s climate. Who knows? Nobody really knows what makes people who experience something similar react to it differently. But we see it every day.”

Marina is the author of the best-selling books Prisoner of Tehran: A Memoir, and After Tehran: A Life Reclaimed. To learn more about her story, visit her website.