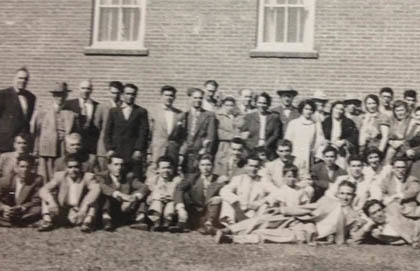 Canada’s first Mosque, Al Rashid, is a not just a piece of history. Today, it’s a vibrant community in Edmonton that brings together thousands of Muslims and non-Muslims alike each year.

In 1938, Edmonton’s small Muslim population was beginning to establish a strong foothold in both economic and social spheres. But as the Muslim community began to grow and prosper, they felt their religious life was disappearing. Though Muslims would gather in homes for daily prayer, the need for a large public gathering space became evident.

Construction of the original Al Rashid building started in May of 1938, but a lack of financial resources put a halt to the project. While Rashid has become self-sustaining, in its humble beginnings it was supported by other faith communities. In the face of the financial roadblock, a group of Muslim fundraisers started to seek financial assistance, not only from their own community but also from the Christian and Jewish communities.

Aumer Assaf, Al Rashid congregant, has been involved in the mosque ever since he can remember. He was born and raised in Edmonton, and his lineage in Alberta goes back four generations. Professionally, Aumer is a co-founder of an architecture firm called Office of City Interviewed. Aumer grew up praying and socializing at Al Rashid—the mosque functioned as a community centre for him and his friends throughout his childhood.

“The original story of the '38 Mosque is a great story because even the mayor participated in helping secure the land. The women went out and beat on doors, and collected money from all different kinds of people. Everybody wanted to see this succeed from the greater community.”

By December 1938, they were able to raise enough funding to complete the project.

The time came to build a bigger mosque with newer facilities. The original building was moved to Fort Edmonton Park in 1989, the bricks and spires had to be removed and the entire structure was moved in the middle of the night to avoid traffic.

The new Al Rashid building experienced a similar level of generosity from the surrounding community during the building process. While this time it didn’t require the support to finish the project, the charitable spirit of the community is emblematic of Edmonton’s hospitality toward Al Rashid.

“People were still interesting in seeing Al Rashid succeed because it is and was a benefit to the community, and to the city as a whole.”

Today, just as in the past, Al Rashid is not your typical dogmatic place of worship, notes Aumer. There's a shared sense of ownership over the community that transcends religious formalism.

The secret to Al Rashid’s success, says Aumer, is the firm foundation that was laid by its founders over a century ago. “They had weddings in there, they had funerals in there, but they've also been very integrated community. They had community meals, and they would invite everybody—from the Ukrainian Center, from Polish, from German background-- and they all congregated together,”

“They all hung out. Congregated is kind of a stuffy word. They hung out. It's exactly what they were doing,”

Aumer thinks it was this kind of open comradery that helped to ground the Mosque, which is still flourishing today.

For more information, visit Al Rashid’s website. You can also see their project “A New Life in a New Land: The Muslim Experience in Canada” here.