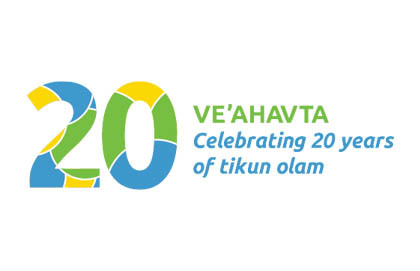 Danny Richmond loves going to work. He’s the Director of Community Engagement at Ve’ahavta, a Jewish philanthropic organization in Toronto, dedicated to promoting positive change in the lives of people of all faiths who are marginalized by poverty. Despite being confronted daily with the seriousness of issues such as the Indigenous health crisis and homelessness, he’s excited—even smiling— when he talks about his job.

Ve'ahavta is Hebrew for "and you shall love." It comes from the Biblical commandment, "you shall love the stranger." The name isn’t a just vague scriptural reference—it bears weight in the day to day work of the organization.

While it’s easy to be disheartened by the severity of the social and economic disparity the philanthropic group is up against, at Ve’ahavta, “you see people rolling up their sleeves and stepping up,” says Danny. And it’s that determination that makes work so fulfilling.

“You also see the amazing resilience and strength and courage of our clients, or Indigenous communities, who, when they've been knocked down, are coming up. That's inspiring to be and work alongside,” he says.

20 years ago, Avrum Rosensweig, Ve’ahavta President and CEO, started the organization in response to the Rwandan genocide. His goal was to form an organized and institutional response from the Jewish community towards that atrocity.

Rosensweig’s inspiration to start the organization was deeply rooted in his relationship with his father, who was a rabbi. Growing up, his home was always open to anyone who needed it, and was constantly in service to others.

Since then, Ve’ahavta has grown significantly, and remains resolved to live up to their name through their many programs and engagement events. It now runs on a two-fold mandate. “One is to serve and promote the dignity of marginalized individuals, and the second part of our mandate is to mobilize the Jewish community and the wider community to do acts of ‘tikun olam’—[Hebrew for] to repair the world,” says Danny.

They do this through programs like their Mobile Jewish Response to the Homeless (MJRH), which is an outreach van that serves up to 100 individuals living on the streets of downtown Toronto. The van goes out five times a week and offers supplies and most importantly, a friendly face and uplifting spirit.

Ve’ahavta also hosts a Creative Writing Program which seeks to engage marginalized individuals in creative forms of expression to help break patterns of social isolation—patterns that deteriorate the physical and mental health of individuals who experience homelessness or marginalization.

When I asked Danny what he’s most excited about at work, he said the Indigenous outreach program Bruit, which means “health” in Hebrew. Bruit is a national Jewish and Aboriginal health promotion initiative, in partnership with the Kenora Chiefs Advisory.

For Danny, the promotion and protection of Aboriginal health lies at the core of Canada’s most pressing agendas.

“[I]t's such an important issue. I think there's a moment that we've hit as a country, where it's this kind of tipping point question on whether or not we'll be able to create a more just nation for everyone who lives here, most importantly, those who were the first inhabitants of this land,” he says.

“Our goal, or my goal, is to make sure that the Jewish community is allies in that work and helping to lead some of the calls to action from the Truth and Reconciliation Commission, and so, designing the programs that will be that answer to help mobilize the community,” he says.

The philanthropic group seeks to extend solidarity across all faith boundaries in Canada and abroad. Though Jewish tradition has been woven in to the fabric of their organization, Ve’ahavta is multifaith. The organization is staffed with people from all beliefs and backgrounds.

“I think we're proud of the fact that we're inspired by Jewish values, but we don't think that limits who can be involved with us, and certainly, we, in Ve'ahavta, ‘and you shall love a stranger,’ our mission is to love those regardless of their belief or background.”

If you would like to get involved with Ve’ahavta, visit their volunteer page, or contact their Volunteer Hub at volunteerinfo@veahavta.org.