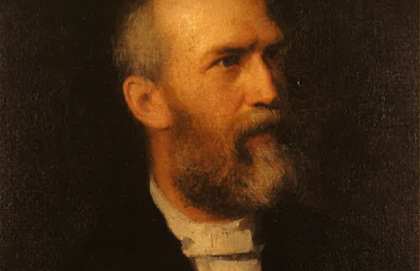 George Monro Grant – Principal Grant of Queen’s College as he universally came to be known – was a celebrated churchman and university administrator who is best remembered for his travel narrative Ocean to Ocean. Grant’s father, James, left his home on the Scottish Highlands at age twenty-five and immigrated to Nova Scotia, where he became a local schoolmaster. George’s mother, Mary Monro, was the daughter of a clergyman and “a woman who combined great practical sagacity with a deep Scottish piety.” James expected that George, his eldest boy, would take over the family farm, but in 1843 young George seriously damaged his right hand, and it became apparent that he would be unable to engage in strenuous farm labour.

"Public policy should be honest, just, and in accordancewith the will and purpose of God."

Thus, George attended Pictou Academy instead, and was then sent to the University of Glasgow, where he graduated in theology in 1860. A clerical position in Glasgow was offered to him, but he felt the need to return to his native land. He was ordained and sent home as a missionary to Nova Scotia. Upon arriving, Grant found the local Presbyterians squabbling over sectarian and political matters, an experience that established religious unity as his lifelong goal. Just shortly before Confederation, he married Jessie Lawson, the eldest daughter of a prosperous Halifax family.

Grant soon demonstrated the organizational and fundraising skills for which he became legendary. By February, l862, he had already built St. Peter’s Church, just outside Charlottetown. Not only was it debt free, it was also able to pay the $750 minimum stipend for a minister. So obvious were Grant’s talents that by the end of the year he received an unconditional and unanimous call from St. Matthew’s Church in Halifax, the oldest and most distinguished dissenting church in the province.

The next year, he began an engagement with higher education that lasted the rest of his life. To counter the influence of King’s College and the Anglican establishment, Nova Scotia’s Presbyterians urged the colony’s government to reorganize Dalhousie College into a non-denominational school. Grant promptly raised $4,000 to endow a chair of mathematics and was elected to the school’s board of governors. Later, in 1877, he raised the enormous sum of $80,000 to endow Pine Hill Theological College.

Grant became increasingly active in public and denominational issues. From 1865 to 1867, he was – sometimes to the annoyance of his parishioners – an active advocate of the cause of Confederation. He even took on the celebrated journalist and politician Joseph Howe, whom he otherwise greatly admired and whose biography he was later to write. From 1868 to 1873, he was convenor of the home mission board and actively supported the union of the Church of Scotland in the maritime colonies. In 1875, he was one of the leaders of a national Presbyterian union, and he regularly defended liberal religious causes. Grant vigorously defended the Reverend D. J. Macdonell against attempts to drive him from the church on the grounds of an injudicious sermon he had preached in Toronto, even though Grant himself considered the sermon unwise.

In 1872, Grant was invited by Sandford Fleming to accompany him on a cross-Canada expedition to conduct the preliminary survey of the railroad that John A. Macdonald had agreed to build as the price of British Columbia’s entry into Confederation. From this trip emerged Grant’s best-known publication, his travel narrative, Ocean to Ocean. He developed a strong admiration for many of the aboriginals he met along the route. “It is easy to understand how an Englishman, travelling for weeks together with an Indian guide, so often contracts a strong friendship for him; for the Indian qualities of patience, endurance, dignity and self-control, are the very ones to evoke friendship.” Grant was one of the first Canadians to urge “liberal, and, if possible, permanent compensation” for native peoples.

On Sundays, Grant held a service. “We did not ask any of our men what denomination he was of, but took it for granted that he could join in common prayer, and hear with profit the simplest truths of Christianity.” Once in British Columbia, he empathized with the plight of Chinese immigrants. Grant believed that it was unjust to allow the Chinese to work in unsafe conditions for poor wages, particularly as they were “repelled … from us by systematic injustice and insult, and that when dead a Company may clear money by carrying their bodies back to their own land.”

In 1877, Grant was invited to become the principal of a small Presbyterian college, known as Queen’s, in Kingston, Ontario. Grant rose to the challenge and spent the next twenty-five years developing Queen’s into a financially and academically sound institution. In 1883, Oliver Mowat, the premier of Ontario, asked Grant to become Ontario’s minister of education. Grant declined, but he used his increasingly good political connections to press for greater governmental funding for Queen’s.

Although a Conservative, Grant was not a great admirer of his local MP, John A. Macdonald. He felt that the Scottish-born politician had introduced many corrupt practices into Canadian politics. Grant’s political ideals lay along the lines of Imperial Federation, a movement in which his friend George Parkin would become a leading figure. Grant’s son, William, would much later marry Parkin’s daughter, Maude, and they would become the parents of George Parkin Grant.

In 1893, two years after Macdonald’s death, Grant abandoned the Conservative party in favour of Laurier’s Liberals. Over the next three years, he fought vigorously against attempts to exclude the Chinese from Canada.

Grant also wrote numerous books, including New Year Sermons and Our Five Foreign Missions. In 1894, he travelled west and wrote a series of reports for the Globe on the Manitoba Schools question, an issue that was fiercely dividing Canadians along religious and linguistic lines. The same year saw the publication of his most important religious work, The Religions of the World. In 1898, he took a prominent role in the foundation of the Canadian Society of Christian Unity.

In 1901, Grant’s wife died, and he sought relief in overwork – leading to his own physical collapse. By 1902, he was seriously ill. Grant was overheard uttering a whispered prayer from his deathbed: “Give me a chance; Oh my God, give me a chance.” Four days later, Grant died.

He was buried in Catarqui Cemetery, Kingston, near the grave of Sir John A. Macdonald. Grant’s beliefs were “held with a tenacity which he was willing to do and suffer everything.” This was nowhere clearer than in the public realm in which he had lived so much of his life. There, his overriding desire was “that public policy should be honest, just, and in accordance with the will and purpose of God.”