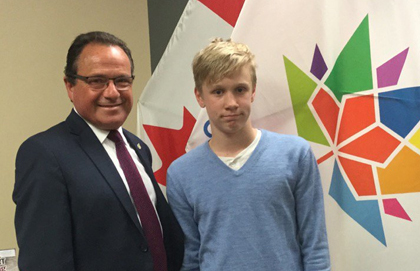 On January 23, 2006, a man by the name of Harold Albrecht won the federal riding of Kitchener-Conestoga, beating out Liberal candidate Lynn Myers, NDP candidate Len Carter and Green Party candidate Kristine Stapleton. Who is Harold Albrecht? He is a retired dentist and pastor. Harold Albrecht assumed office in Parliament Hill 11 years ago and has helped to pass a number of bills and speak to various issues that are informed by his faith. Harold is a man of strong faith and has made plenty of decisions based in faith.

Harold was born into a Christian family. His father was his main faith figure and he lived out his faith daily. His father believed that everyone needs to trust Christ as saviour. His dad only had a grade four education and he farmed all of his life, providing for a family of seven children. Harold never felt poor in his early life, although his family was a low-income household. At age seven Harold was baptized in Alder Creek (in New Dundee, Ontario) and has never looked back in his personal faith.

There were three times in Harold’s life where he sensed God’s call to service. In Grade 11, he felt a clear nudge to go into the practice of dentistry. Following graduation from Waterloo Oxford District Secondary School, and having attended Wilfrid Laurier University in general science, he studied Dentistry at the University of Toronto. Graduating in 1973 with his Doctor of Dental Surgery degree, Harold opened his own dentistry practice in Kitchener at the age of 23.

The second “call” that Harold felt was in the year of 1998. This calling was a moment when he was approached by leaders of the Brethren in Christ. The leaders asked Harold and his wife Betty if they would consider starting a new church plant in the Doon Area of Kitchener. Harold had some fear of failure, as he would be leaving his dentistry practice and starting something which had no guarantee of success. God’s calling came early in Harold’s life, and as a child of God, he has tried to faithfully follow this call.

In 2005, following initial contact by people of his community, Harold felt led to pursue the nomination to become the Conservative candidate for Kitchener-Conestoga and was elected as MP in January of 2006. Being a Member of Parliament for over 11 years, Harold has made many difficult decisions in politics. Canada has had a significant number of controversial bills and legislation before the House and Senate. One such bill was C-14, regarding doctor-assisted suicide. The passing of the bill was not what Harold wanted. He believes that all human life is a gift, and should be treasured and valued. Bill C-14 portrays physician assisted suicide as compassionate; however, the word compassionate is defined as suffering with someone, and he wonders how can you suffer with someone when you have just given them assistance for their death?

The issue of gender identity (Bill C-16) goes against generations of commonly held values, including his own. Harold believes that a sexual relationship is to be reserved for a man and a woman after marriage and is most fully expressed in that context.

Harold is solidly pro-life. He states: “Vulnerable children are being destroyed in the mother’s womb, which should be the safest place on earth.” Psalm 139:13 says “You knit me together in my mother’s womb.”

While not all decisions have gone the way Harold would have liked, he still feels “God’s smile” as he takes a stand for godly principles.

Harold’s faith informs many of his decisions, but even God’s work in him does not mean the road is easy. On election night in 2011 his wife suffered a brain hemorrhage and died two days later. His faith and hope carried him through a very difficult and dark period of his life. Harold’s faith is very strong and his decisions are strong because God works through him.

As a person of faith, Harold would love to see God’s principles of love be shown in all that the federal government does. Parliament should honour what God wants our world to look like.

Harold says that we need to step up and not allow our rights to be thrown aside. In a perfect world, Harold would want no doctor assisted suicide, no abortion and no drunk driving. Unfortunately, we do not live in a perfect world and government therefore has a role to play in restraining evil. We should work to see the fulfillment of the Lord’s prayer, “Your will be done on earth as it is in heaven.” The people of faith of Kitchener-Conestoga also have a role to play. We have assurance that Christ will always be with us. As people of faith we will need to be the hands and feet of Christ.

Faith in Canada appears to be on the decline, but people like Harold Albrecht are doing what needs to be done. Luke 9:23 says, “Then he said to them all: “Whoever wants to be my disciple must deny themselves and take up their cross daily and follow me.”

Harold has taken up the cross of Christ and has followed his commission. Through his background, current work on Parliament Hill and in the hope for the future, Harold has created a strong bond with God as should we. Members of Parliament have the ability to create a hopeful future for the generations that will follow.