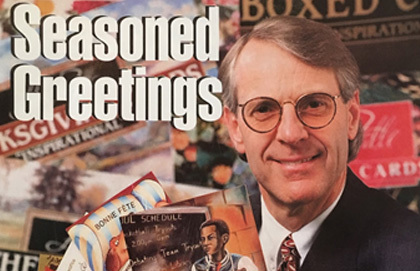 Have you ever felt inspired by an important family member who has contributed to who you are today? My Papa Falle is my role model. He has taught me through the knowledge of his good work that God has called us to be generous and give to those with less. My Papa sold his card business called Image Craft and gained a lot of money from it. He than used the additional money to start a charitable foundation, which gives donations to qualified organizations. This was the beginning of the Falle Family Foundation.

As a young man, he began his career producing wall plaques for retail stores in the comfort of his own home. The growing business influenced my grandparents to move to Cambridge, where he rented three floors in an old building. It was there that he expanded his manufacturing of wall plaques and then added greeting cards. The business was called Lawson Falle. Due to the popularity of his greeting cards, his business began to prosper and he had the money to build his own center.

Even before my Papa sold his business in 2000, the company had been donating to a variety of worthy organizations such as the Cambridge Hospital, Cambridge Community Foundation and Heritage College and Seminary. I admire my Papa’s because he recognized that not everyone had the same privileges as he did. Knowing that the business was such a success, my Papa decided it would be the right time to sell in order to increase his charitable donations. My Papa's desire to give more and his willingness to find ways to achieve his goal is why I find him an important contributor to our community.

Falle Foundation is located in Cambridge. My Papa has appointed my dad the role of manager. He works at the office everyday as his full time job and is dedicated to finalizing the process of what organizations the money will be distributed to. My dad selects various members of the Falle family to attend business meetings to make important decisions. He prepares an agenda for each meeting and acts as a chairperson to conduct proceedings. I appreciate how my Papa honours and includes his family in the foundation and allows them to voice opinions and make choices.

The Falle Foundation contributes to charities or not for profit organizations that focus on improving the health and welfare of children. The foundation gives to Christian schools and universities that my Papa and his staff believe provide a higher quality of education. They also donate to an organization that accepts young people with drug and alcohol addictions, similar to Teen Challenge. Each organization that receives contributions is headquartered in Canada, although they have the ability to function throughout the world.

The Falle Foundation has contributed money towards Alpha ministries for Evangelism purposes and money towards purchasing a new campus at Tyndale University.  The foundation is very careful to steward its money very wisely.  My Papa's willingness and careful investigation is very estimable.

I admire my Papa because he has always been thankful for what he has and he does not take his accomplishments for granted. He has used his many valuable gifts and talents to earn money and now he gives to charitable organizations. It is so special to see how the foundation's money has benefited others who don’t have equal opportunities.

I am truly blessed to be born into a Christian family that has chosen to follow the Lord and part of this commitment involves sharing what you have with those who have less. By seeing the work that my Papa has done I am inspired to get involved in more charitable actions.