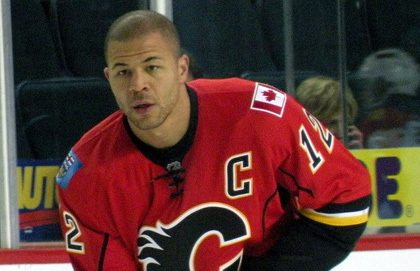 Jarome Arthur-Leigh Adekunle Tig Junior Elvis Iginla is a member of the Los Angeles Kings, an NHL team. He is number 88 on the ice and off the ice. He is a happy, smiling man. Jarome does not find his happiness in winning or scoring, but finds his joy in Christ Jesus, his risen Lord and Savior. His smile and good attitude have impacted Canadian hockey fans around the country.

Jarome Iginla was born on July 1, 1977 in Edmonton. Jarome’s father was a Muslim who converted to Christianity when he moved to Canada. His mother was Buddhist. When Jarome was a year old, his parents divorced. Jarome always had faith, but with his parents having different religions and his school being Catholic he was confused by all the choices, and he was unsure of which religion to follow.

His Mom worked and his Dad went to school, so his grandparents were very supportive and took Jarome to practices and games. Jarome was athletically talented at a young age, and from the time he was seven he has always wanted to be in the NHL. Jarome remembers, on one junior road trip, when a teammate questioned, “What if there what no God? What if we die and it’s just black?” Jarome kept on responding, “There has to be a God,” but the thought scared him.

He talked to his dad who said to talk to God and He would takes Jerome’s fears away. If he did not feel peace about the question he had lost nothing, If he felt peace he would have proof that God is real. Jarome said that was his defining moment as a Christian. Jarome also struggled with being a black person on a team of all white kids. Jarome says that his teammates were very good about it, but sometimes a kid on the other team or a parent in the crowd would say something negative. One time someone said, “Why are you trying to be in the NHL? There are no black players in the NHL.”

Jarome responded with the fact that Grant Fuhr was playing in the NHL at that time and was an All Star.

Jarome is involved with KidSport Calgary, which is a part of KidSport Canada. KidSport is a foundation that helps children whose family are financially challenged. It helps them play sports they probably otherwise would not have the opportunity to play. Kidsport is for all sports, and Jarome believes that all sports are good for children. He says that growing up, he played multiple sports.

Jarome donates $2 000 to charity for each goal he scores. Jarome says that almost every team has a few Christians even if it doesn’t appear so. He says he doesn’t think it is harder to be a Christian in the NHL than any other leagues.

Jarome has a reputation of being very happy and always smiling because he realizes how fortunate and blessed he is to play in the NHL. In an interview with Sports Spectrum Magazine, Jarome said, “Every day I realize how blessed I’ve been in my life.”

Jarome also works with the Juvenile Diabetes Foundation in Calgary. He says diabetes runs in his family so it is close to his heart and he enjoys helping out.

Jarome has also impacted the fans and players around him with his winning spirit. Jarome said it would be an honour if he was a role model to any kid that wanted to play in the NHL. Jarome is said to show his good attitude through his words, action, and smile. Jarome helped bring home the gold for Canada at the 2002 Winter Olympics, the first gold medal for hockey at the Olympics in 50 years.  Instead of finding happiness in winning or making a lot of money, Jarome likes to give back and help the community. He is a good role model to kids who want to be in the NHL and are also Christian because he is living his dream of being a NHL player and also being a follower of Jesus.

Jarome is a great role model to any kid who dreams to play in the NHL. He donates to charities, is a follower of Jesus, and enjoys playing in the NHL every day.

Jarome has impacted the fans and teammates around him with his good attitude and big smile. Jarome Iginla is a six-time all-star. In his career, only 18 people have more career goals. Jarome is an inspiration to anyone, whether hockey player, hockey fan, or Christian, or just anyone.